113 miles to represent the number of days since Breonna Taylor was murdered in her sleep. 113 days that her killers have walked free, 113 days without justice.
I threw this route together pretty last minute the night before heading up to Philo to see our old neighbors Brett and Chay. It's a route I actually wanted to do as a short bike packing trip, but since we were planning to mtb in Mendo anyway Brendan would be driving up in the van, so no need for a loaded down bike. My team mate Victoria did a 112 mile ride for Breonna Friday so I figured I would carry the torch. Initially I wanted to ride to Philo on an inland route and come home on the coast, but the anticipate heatwave inland nixed that idea so I mapped out a route along the coast the night before and it just happened to be the perfect length.

I left later than I normally like because I wanted to arrive at 7pm, however this meant the whole stretch north on Hwy 1 had a heinous headwind. As I battled the wind, trying to make good progress but having to work twice as hard, I thought about everything I've read and heard from BIPOC lately. I thought about how living in this country facing racism from the talk of our president to the microaggressions of white people every day must be like always having a headwind. That is shitty.

The route had to cut east at some point, and I choose to ride across Fish Rock road to get to Boonville because a friend told me it's rad and Bike Monkey has a 'race' across it every year. I ran out of water just before I, got to Fish Rock road just past the halfway point in my ride in both mileage and elevation. The heat, going too hard from the start (like I always do and never learn from) and a little fear of the unknown made me start to feel unglued. I got a little panicky for a while, until I saw a drinking fountain in a park and was able to refill all 4 bottles I was carrying.

The relief of finding water was doubled when I saw the street sign for Fish Rock rd. Having never been there, and not having saved the route on my Garmin (which would have died if I had navigation on anyway), I had been stressing that maybe it was a small logging road, maybe it was closed to the public and Bike Monkey just got permission for their event, maybe there would be turns and I would get lost somewhere between Route 1 and Boonville... Again I felt the weight of my white privileged, this stress I was feeling is probably something BIPOC feel in regular day to day situations.


Long story short Fish Rock road is the most punishing gravel road I've traveled on. I guess being 4 hours and 68 miles into my ride when I came upon it doesn't help, but the initial climb was A BEAR! I wanted to quit very very badly, it took everything I had to turn the pedals over. Not knowing how long the road was, how far to Boonville didn't help, and the temps climbed as I headed east. Fortunately I am very stubborn, it would have taken 10 hours to complete the route had I given into the desire to stop and sit on the side of the road in dismay, but instead I told myself I wouldn't stop until I got to hwy 128. 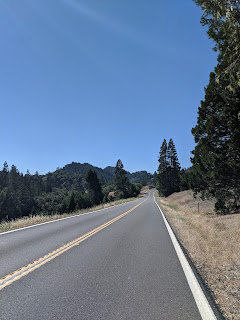 Eventually, after what felt like an eternity, I could tell I was on the final descent into the Anderson Valley. Although the temperature was now 95 degrees it was a CRAZY relief to see the intersection and turn left onto 128, 7 miles from Boonville. I counted down each tenth of a mile until I arrived in town, and pulled over at the first convenience store I saw. I had been nursing my last bottle of water over the last two hours and was dying for Gatorade, and cold water. The store was big and empty, so even though I had told myself I wouldn't stop and expose myself to potentially getting the virus in another community, I masked up and ran in. After devouring TWO paletas on the ground outside the store I got back on my bike and headed north into the headwind for the last 13 miles of the ride. 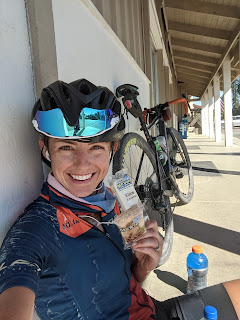 The final stretch was hard, and I counted down the miles, grateful for every descent. I thought about the 4th of July, how we used to celebrate 'freedom' but how this year it doesn't feel right. No one is free until everyone is free kept repeating in my mind.

So this ride is for you Breonna. You don't get to eat Paletas, ride a bike, see the coast, feel joy or pain. All those things were stolen from you by the systematic racism that plagues our country, and the broken criminal justice system that allows racist cops to kill BIPOC without consequence.