Every morning since we got back from vacation I have woken up in a strange state of confusion. Seriously, like what a strange place we are in, in life. Each morning is the same progression of: where am I, why am I not living in the van racing bikes? Wait, I'm pregnant, right? Holy crap, I'm super pregnant, my belly is HUGE! OMG how lucky are we that we are going to have a baby.
No joke, every morning. It's pretty rad.
It took a while, but I'm finally in a head space where I am 100% stoked beyond belief about the alien pushing its limbs along my abdomen. Where I don't wish I could ride bikes on any given day, and where taking a nap in the afternoon because my body is working so hard seems like the right thing to do, no questions asked. I was always happy about this baby, but all the things being preggo has taken away from me don't matter anymore, and that's a pretty good feeling.

Other interesting week 35 thoughts and feelings: 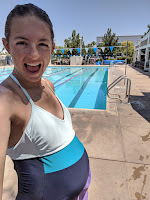 We are two weeks away from full term!!! Which means the baby could come any time from 2-5 weeks from now! Crazy. Besides not feeling sad about missing the bike and all that I'm also really starting to enjoy actually being pregnant. I can eat what I want, when I want, and I feel really good most of the time (besides my legs hurting after long house construction sessions). I'm soaking it all in because I'm imagining this is way easier than having a newborn, thinking about the concept of loosing baby weight, and potentially starting to train from scratch (nothing is guaranteed, but IF I feel the pull to race again...). Just right here, right now I'm enjoying every moment because I know it will be over soon. I'm also super stoked with how capable I am this far a long, like I can still swim 2 miles, hike, work on the house, and do pretty much anything I want to do. I imagined before this that the last month would mean sitting on the couch eating ice cream too big to want to walk, but it's not like that at all! I just have a big belly and my cycling jerseys don't fit, nothing else is really that different! 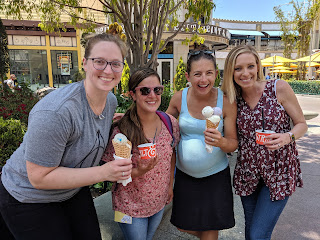 Another fun, strange, interesting side affect of this pregnancy is that I feel so much more like a normal person than I ever have. I don't work out to train to win anything, I work out to feel good. I don't turn down ice cream trips with co-workers or late night concerts like Vulfpeck in Berkeley, it's kinda a nice break from the last 5 years of structured training, prioritizing rest between, starving myself all the time etc... I think being an elite athlete prepared me pretty well for this because I'm used to feeling depleted all the time, to staying off my feet, focusing on hydrating... Now I'm just training in a different way, like by reading lots of books on pregnancy and labor, doing strange exercises (hello Kegels) and meditating/visualization practice.
And lastly for today random people are JUST NOW starting to ask me when I'm due, like as in everyone who saw me in the past 3 months either couldn't tell and didn't want to be rude or just thought I was chubby. I find this hilarious. I FEEL HUGE but people keep saying I'm 'small' and it's equal parts encouraging that the baby will be small and strange to me because I feel like it would be 'bad' if I wasn't 'small'. I don't feel small, so I feel like if I do gain a bunch of weight it will be 'bad'... I don't know, I'm probably being over sensitive. On that note though I originally thought that I could get away with wearing sports bras and my old running shorts all summer, but my hips have gotten so wide that the shorts wont fit much longer. I really don't want to buy maternity clothes, so I'm hoping I can make it 4 more weeks with the one pair of maternity shorts I have and dresses for when we have to go out in public! 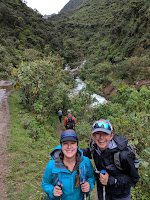 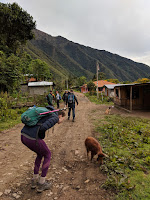 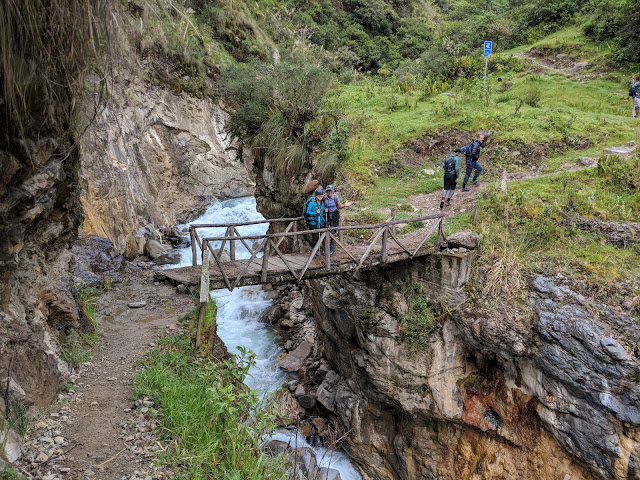 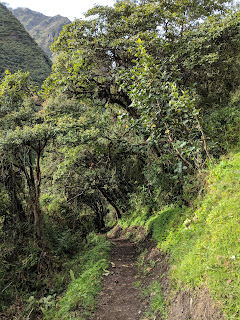 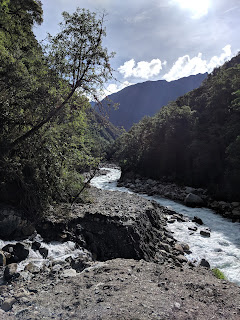 We crossed tons of bridges, some legit and sturdy looking, some sketchy logs over a river bridges. Once again I was wishing I had my mountain bike, and once again I really enjoyed the conversation with the others in our group (this time talking to Jen about their neighborhood and chickens). 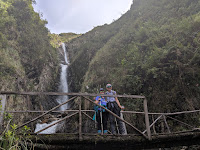 I can't get over how lush and green and vibrant the jungle was. It was really really cool to have come down off this huge glacier where the landscape was basically just rock and bam, next day you are in this lush jungle. 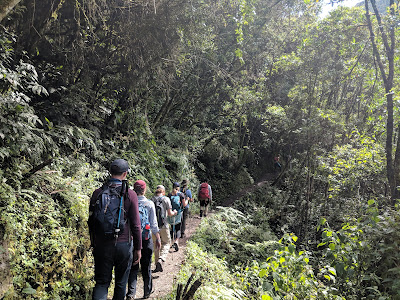 After hiking for a few hours we came across a few passion fruit farms. The temperature was rising, and as the shade gave way to sun we got quite warm. Fortunately one of the farms sold popsicles! Lexi and I bought one of each passion fruit flavor as there were two varieties, one tart and intensely flavorful, the other more mild and sweet. It was like heaven eating such a cold treat in the shade, off our feet for a moment. 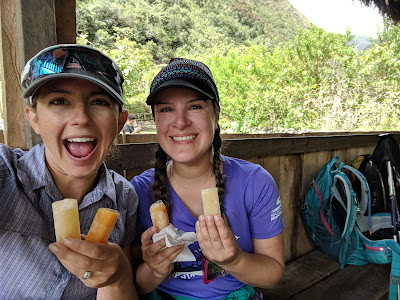 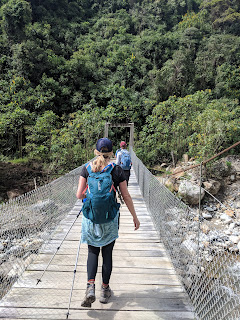 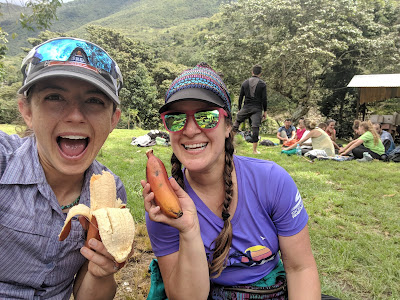 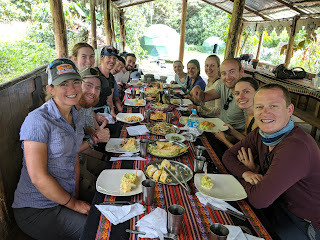 Fortunately lunch was at our camp for the night, meaning after lunch we had the afternoon free to go zip lining, to the hot springs, or to relax at camp.
I think lunch on day 3 was another of my favorite meals because there were two huge trays of guacamole most likely made with avocados from the trees all around the farm we were staying on. I ate so much guacamole I was sick all afternoon, and I was still burping it up at dinner time. The chefs also made animals out of veggies like the eggplant condor below. I thought that was hilarious. 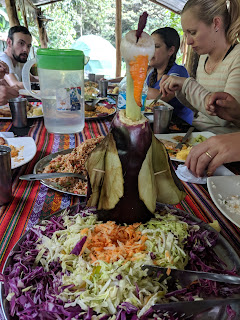 Because we had skipped showering the previous night Lexi and I decided to go to the hot springs where there was relaxation plus a hot shower two for the price of one. I also didn't really feel like zip lining 5 months pregnant was a great idea, esp considering I was already pushing my luck in the doing too much category.
The hot springs was crazy impressive, with three HUGE pools decreasing in temperature as you moved downhill. I went in the cooler two, but opted to skip the super hot one for the baby's sake. After we found out the 'shower' was just to wash yourself in the runoff from the hotspring, which was a little gross and not private at all, but we did the best we could with what we had :) 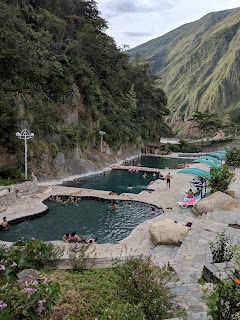 On the bus ride back to camp we had another amazing conversation with our trekking companions on parenting and things everyone has observed with entitlement and children in nature. I love that our group was so open and shared so much about their own families. I've been pretty scared about parenting, and hearing so many opinions and observations has helped me continue to build a picture in my mind of who I want to be as a parent. I appreciate all the different viewpoints and thoughts SO much!

And then we had dinner (yet another meal where I wasn't hungry but ate anyway because energy) and went straight to sleep because we were all beat.