PERU!!! Just our time in Cuzco for now 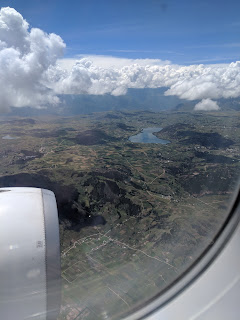 My co-worker Lexi and I returned from Peru last night, from what was a crazy whirlwind trip that has me dying to go back to South America already, for a much longer stay.

I'm not really sure why we choose Peru for spring break in the first place, but one week isn't nearly enough time to visit such a magical, colorful, beautiful country, so I regret not planning this trip for summer. However, we also bought tickets and purchased a trek before I knew I was pregnant, and I'm not sure hiking 45ish miles through the Andes at 6.5 months pregnant would have been possible, so perhaps it was the best of all both possibilities.

I knew we were in for a treat on the plane ride from Lima to Cuzco. Looking out the window was as magical as any movie as we floated very close to rough mountains and deep valleys covered in glorious looking groads. I was pining to bring my VR to Peru next time to ride every single dirt road I saw, eating empanadas along the way... next time.


I'm not entirely sure how to write this blog post since there is so much to say and so many pictures to share. I think I'll split the trip into two recaps: Our time in Cuzco, the first two days of the trip, followed by our trek to Machu Picchu.

Highlights of our time in Cuzco:

Lexi and I had 1.5 days in Cuzco before the trek, which means only a day and a half to acclimate to the altitude. Cuzco sits at 11,000ft above sea level, high enough that it's not unheard of for people to get off the plane and instantly get altitude sickness. We were both worried about that possibility when our plane landed, but fortunately enough our first 2 days were great and neither of us suffered much more than being short of breath walking up the 1,000 stairs to our Airbnb. 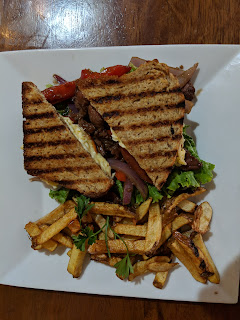 We landed around noon, so after we checked in we headed right out to see the town, eat lunch and try to outsmart the red-eye flight jetlag. We stopped at the first restaurant we saw, CJ's Cafe, since the menu looked good/ the prices reasonable and Lexi ate the most amazing looking Lomo Saltado sandwich (while I was lame and ate leftovers from the day before in LA). Best looking sandwich ever >>

Then we proceeded to walk ALL OVER the Plaza de Armas area, covering as many of the little streets and ducking into as many little gift shops as we could.


Each alley way in Cuzco leads to a beautiful courtyard, and
each doorway to a burst of colorful souvenirs. I think Cuzco is the cutest town to walk around in because there is so much going on, everything is bright and beautiful and there is so much to see. Literally every shop owner is bugging you to buy their goods, including restaurants and massage parlors, and it took me a little while to learn to ignore them instead of always trying to be polite and say no thanks. 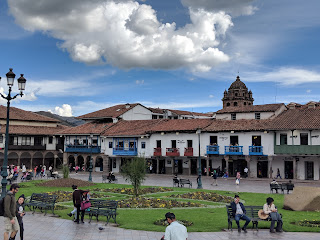 The main plaza is surrounded by the most adorable buildings with colorful balconys and all the streets are cobble stone. Our tour guide told us later in the week that many of the stones in the square were thrown down at the Spanish by the Incas when they were defending their settlement up the hill, Seqsaywhaman. 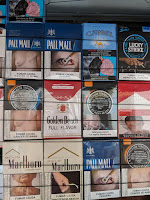 I especially liked the marketing on the cigarette packages. I guess in other countries they are actually trying to stop people from smoking! Candy packaging also has a sticker on it that says 'High in sugar, don't consume in excess' which is pretty great I think! 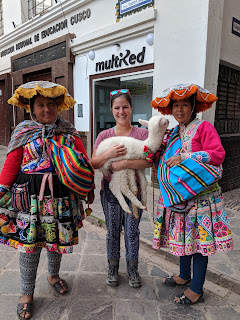 During our exploring I definitely looked like an out of place tourist, while Lexi spoke perfect Spanish with everyone which made me jealous/grateful to have to best travel buddy ever for this trip! I guess we both looked tourist enough though, that two women dressed in traditional garb threw a baby llama into our arms, then let us take pictures, just to demand an exorbitant price for said pictures. In a fluster we (read I) didn't use my noggin and gave them an insane amount of money on accident... and once re realized that our combined payment was unreasonably high they were gone. Initially I thought 'oh well, I'm helping them support their families' but later I felt guilty for thinking this because it feels a bit like some white tourist savior BS and now I'm just confused. In any case, we were much more wary of tourist traps in the future, because even the adorably traditionally dressed little ladies are savvy as all get out. 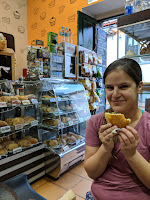 Dinner on day 1 was the stuff of my dreams, we found an little shop with every type of empanada you can imagine and split a few of them (after I briefly and traumatically got locked in the bathroom).


On day 2 we planned to do a little hiking to test out our sea level legs and see some sights above town. Menso the Great told me that we could take a taxi up the hill and hike down through three different ruins ending in town, but after a confusing discussion with our airbnb host we decided to just hoof it up ourselves, no taxi necessary. Our hike took us first to a very cute church on the hill that was in the middle of their Palms Sunday service. Since we were being stalked by a questionable resident (who mostly wanted us to pay him to be a tour guide but didn't understand personal space) we ducked into the church and got a little religion. It was actually pretty cool even though I didn't understand much of what was going on. 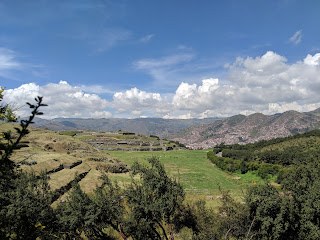 After church we continued up the hill to Seqsaywhaman, which is basically pronounced as 'sexy woman', which is a crazy impressive Inca settlement sitting high above Cuzco. We opted not to pay to get in for an official tour, but I kinda regret that now, if you go don't skip the tour. We did accidentally end up in the seqsaywhaman grounds twice, so we got to see some of the ruins and they were really cool. 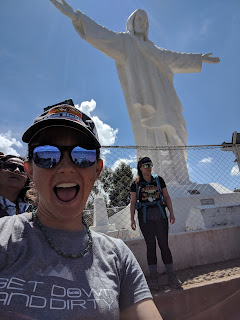 From there we continued to the Christo Blanco that you see on top of the hill from Cuzco, where we broke bread (read: ate a pastry we saved from the night before) and took in the crazy good view of Cuzco. There was a parade happening down in the main plaza and we could hear the music and see the procession from way up above.

We took a shortcut down a crazy set of stairs back into town and then devoured another Lomo Saltado sandwhich and the best fries of my life (apparently Peru has 3,000 varieties of potatoes and they found the perfect ones for fries). Then we explored some more, ate ice cream on the square and wandered through the San Pedro market, which we found by accident while lost looking for San Francisco Square. 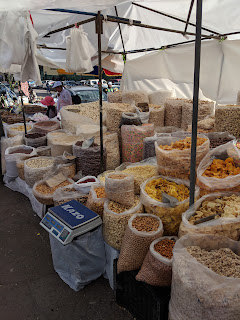 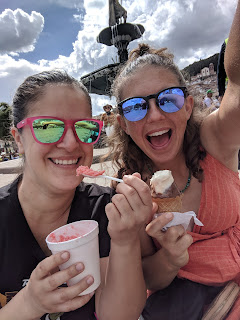 And then we went to the orientation for our trek, where I got crazy nervous and basically had a panic attack because I didn't know if I could handle the whole week of hiking at elevation. More on that soon plus all the prettiest pictures!