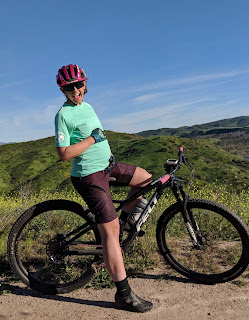 my 2019 plans include just one thing!
Growing a freaking human!!!!!

I'm crazy excited to say that while my body was recovering from literally metabolizing itself back in November, somehow it thought 'Now's the time to create new life!' And so it was a complete shock to both Brendan and I when I found out in late January that we will become parents sometime around Aug 28 this year.

It's no secret that this is something we have wanted for a while, but yes, there is a part of me that thinks... winning BWR and Leadville 3 times in a row would have been so freaking rad... BUT it also feels right to put the ego aside, finally, and focus on something a bit different. That's not to say I wont ever toe the line in a bike race again, but at least for 2019 I am sticking with my 12 mile bike commute and a few fun 'celebrity appearances' hahaha until the belly is too big to fit over a top tube.

And now for a short story and some rando thoughts from preggo Lars (warning: this may turn into a pregnant biker blog haha)

Remember back in December when 6 weeks had passed since I got back from Costa Rica? I was pretty frustrated that I wasn't feeling normal, wasn't feeling good on the bike, was still tired and unmotivated. I took a few extra weeks to recover, thinking the Rhabdo had just been really really bad, and started commuting to work twice a week. Over Christmas break I rode some and rested some, and spent a lot of time comparing Dec 2018 to Dec 2017 in which I had ridden 500 miles a week and completed the trek from SF to LA by bike alone in 2 days for a New Years celebration. I think I was fighting off depression because I didn't really know what was wrong with me, and everyone on social media was deep into their insane long base training rides while I could barely eek out 35 miles at a time. I tried to celebrate the ability to just be on a bike, but it's a pretty big distance to fall in a year, and it was honestly hard to deal with mentally.

In early January Bonk Breaker asked me to come do a fun 80ish mile ride they had put together called Tranquilo, and despite having not ridden more than 45 miles at a time since November I agreed, figuring I could just jump in the follow car worst case scenario. The Tranquilo was hard, again mentally as much as physically. When we turned to go up Sycamore Canyon and half the group rode away in front of me it was really hard on my ego, and I just couldn't push hard enough on the pedals to keep up. I survived, but only because I resigned to ride my own pace for the last 15ish miles, and slogged along at a pathetic clip up dirt Mulholland. I did still bask in the sunshine and ability to be outdoors in nature, pushing pedals, but my competitive side ached.

A week or so later I was mountain biking with Menso the great and the possibility of pregnancy came up. Being the logical intelligent being he is, Menso suggested I just take a test to know one way or the other, that way a major mountain bike crash + ER visit wouldn't be how I found out if I HAD been pregnant.

So that's how we discovered, right after my birthday, almost 10 weeks into growing a human, that all that not feeling great had a very great reason. The best possible reason for why I felt a little crappy in Dec, and why I wasn't bonkers to ride 100 miles every day over Christmas break.

More rando thoughts to come, because now that we are 'out' about this, there is so much on my mind about riding with a small human inside you, and life in general. But for now, that's my plan, no racing, no defending titles, no living in a van all summer chasing finish lines. Just one due date to chase, and maybe the biggest accomplishment of my life ahead.
Posted by Ms Lariss at 9:02 AM