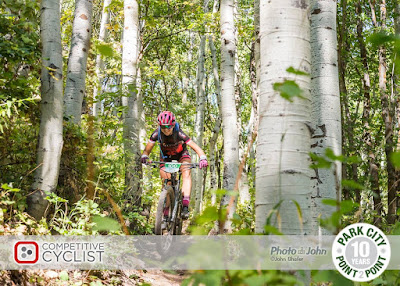 I know the way I went about this race, and pretty much every race is all wrong. As I worked my way through the trails in Round Valley in the first 10 miles of the day I thought a lot about racing my own race verses strategizing to win by abusing my competitors. I knew going out crazy hard was/is the most painful way to go about trying to win a bike race. I thought a lot about all the possible outcomes, but when push comes to shove, the only thing I feel comfortable with is going bananas from the gun, 110%, way too hard, establishing a gap and then holding on for dear life hoping everyone else is cracked just enough to not catch me for the second half of the race. So despite the slightly shorter distance of Park City Point 2 Point, only 75 miles instead of 100, I choose to use the same tactic. What the course lacked in length it more than made up in technical single track and climbing, so even though I feared getting my butt kicked by local power house and all around shredder Evelyn, I was hoping the sheer length of time it takes to complete the course would give me an advantage.


When the fruitloop cannon was shot and we crossed the start line I pinned it hard. The occasional glance at my power meter confirmed that we were flying, and so did the shearing pain in my lungs and legs. I realize that hitting cross country power numbers for the first 30 minutes of a 7 hour race AT ALTITUDE is definitely NOT a good idea, but I could not for the life of me shake Evelyn. At some point, as we smashed our way around the smooth, flowy fun Round Valley trails I made the conscious decision to go all in on this terrible strategy. Instead of easing off and racing smart I was going to try to blow both of us up as spectacularly as possible. I was hoping that from all my experience racing 100 milers that I could survive the suicide mission and everyone else would... well, not.

I just kept repeating to myself that I could do it, and surprisingly the first hour felt pretty darn good, at least in my legs. My stomach was a whole different story. Failing to pack instant oats, my usual pre-race breakfast, meant I had eaten regular oats 1.75 hours before the race start, and they were not digesting like the instant ones do. I had terrible stomach cramps for the first three hours of the race, and even threw up undigested oats twice an hour in. The stomach problems were a HUGE deterrent from eating and drinking, so although I was thinking about how I should be doing both, I couldn't bring myself to put anything in my tortured tummy.

When the first of the age group men caught me (wave 3 of the race which started 2 minutes after the open women's field) I was already deep into the Deer valley singletrack, much further along than I was in 2017 when I got caught by the same dudes. This was a confidence boost, as well as a reality check that I had indeed started out WAY too fast. I could still see Evelyn on the occasional tree-less section with switchbacks, so I kept the pace high and continued to tell myself that I could handle the obscenely fast start.

The course is pretty much all single track, like people in Park City are allergic to fire roads. It's heaven. If you ever do ride on paved road or fire road in this race it's for 30 seconds or less and it's just a means to get to another incredible trail. The race also feels like it's 95% climbing, topping out at 9,000ft twice, and getting almost 12,000ft of ascent crammed into 75 miles.

When the age group guys caught me I rode with a few of them for a while, secretly thankful to have someone to pace me as a few of them passed me and then slowed down (which normally I would be annoyed by, but this time I just breathed down their necks but refused to pass them back, which was prob pretty obnoxious). Then when we hit John's trail, the most twisty, rooty, windy, drunk trail you can imagine, with Aspen trees trying to take you out every 2 ft, Dan who used to live in San Diego  dropped me like a bad habit and I was super pissed that he put so much time into me in such a short actual distance.

Eventually I found myself climbing the dreaded steps situation, and reminded myself that nothing in Utah could possibly be as terrible as the climbs in my beloved Santa Ana mountains, and that carried me to the second high point. I finally felt good enough at the top to eat a PB&J Bonk Breaker, and it made a big difference since I was feeling the malnutrition feelings pretty hard. The ripping descent that followed was crazy fun, and it led me to the Aid station where Mila and Sienna had a feed for me. Somehow I had managed to force myself to drink the bottle I was carrying, so I grabbed a new bottle of Bonk Breaker hydration from the girls (which I would accidentally not drink any of) and was off to tackle the last long climb, and remaining 20 miles of the course.

At the top of the climb Karl was waiting to cheer/ ride with me, and the concept of being followed helped me dig deep to ride harder than I had been on the way up Armstrong. I also got intel that Evelyn was only 8 minutes back, which freaked me out, given how badly I was falling apart. The thought that I was dehydrated and under nourished was freaking me out, more so in my mind that in my body. My ego took over though, and the drive to impress Karl gave me the strength to dig deep, climb harder and pour every ounce of myself into descending as fast as possible. When Karl got a flat and had to stop I was secretly relieved that I could slow down again once I was out of sight, haha, and I did some calculations in my head about how much time I could loose per mile and not get caught.

I was stoked out of my mind when I got to the Oasis aid station in the Colony. I was hoping for pickle juice and some solid food since I was still behind in the calorie intake situation. The only thing I found that was suitable though was pickle slices and a PB&J. I was grateful for the pickles nonetheless, and after I drank some water I took off again, stressed about how long I had stopped for, hoping Evelyn would also stop.

By the time I reached the final descent I was pretty thoroughly cracked. The fear of being caught drove me to empty the tank on the last 10 miles of the course, and I limped down Olympic trail (which always looks like Greece to me) to Iron Bill trail listening for Evelyn's free hub, thinking every quaking aspen was her. I was crazy relieved when I looked up and saw the finish at Skull Candy and she wasn't yet in sight.

This race is one of my absolute faves. I love it because of the challenge and the pain and the scenery like most the other races, but this one is even better, set apart, by the amazing people who put it on and who pour everything of themselves into making it magical. Thank you to everyone who cooked bacon at aid stations, cheered, volunteered, worked hours and hours to make it happen, and especially for the Redel family who graciously host me every year and treat me like royalty. I am the luckiest girl in the world to get to race Park City Point2Point every year. Thank you for making it a dream :)