Who's Sad About School Starting?!

Sometimes I tell myself lies to trick my brain into believing something that's not true. 'racing 100 miles every weekend is normal', 'you feel really good right now (at mile 80 of a long race)' or 'you love the pain of going uphill'! That shit works too, try it, the more you tell yourself something the more you really truly believe it. I think that's why they say stuff like 'it's all in your head' or 'if you think you can, you can'.
So it's funny that despite the fact that I should be a little depressed about going back to school in a few days, I'm actually genuinely excited about the school year! No lying to myself necessary :)
It probably helps that I've been living my wildest dreams in a very much take it past the limit Larissa fashion. Living out my wildest dreams a little TOO much, as I am now laid up in bed dreading the idea of getting up, and it's 2:45 in the afternoon haha (don't worry I went to school this am, I WISH I could have stayed in bed straight through 😂)
So here is what my wildest dreams look like SoCal style (because we all know I really just want to ride all day in the high country of CO, but sometimes you have to adapt your dreams to fit the surrounding landscape!)Sunday Carl let me drag him on an epic LA county ride complete with route that neither of us put much time or energy into. My only inspiration was to ride all of Mulholland, and to hit 100 miles but be back in time to have dinner with my little brother who has been surgrifying people at UCLA for the past 2 weeks. I threw some waypoints on Strava, and we were off across Mulholland before 8am. Fun fact, it's not all paved, so despite promising Carl that I had edited the dirt out of my route, it used to have some Backbone trail in it, we ended up crushing 10ish miles of dirt anyway.

A fun stop at Rockstore marked the first touristy point of the day, and I got to play dodge the massive bikers to fill bottles while Carl changes a flat. 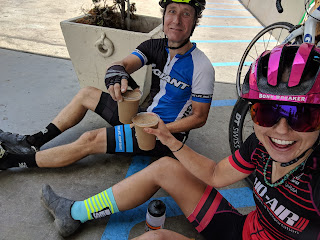 After Mulholland took us to hwy 1 we promptly turned left to climb back into the humid mountains and immediately both almost died from not drinking/eating enough. A sit down break at the top to inhale almond butter and jelly, followed by another sit down break at the bottom of the descent to drink frozen coffee at the Chevron in Malibu fixed that!

And then, after another soul crushing climb to ensure maximum elevation gain/suffering we found ourselves dodging tourists in Santa Monica, the sketchiest stretch of hwy 1 to ride a bike!

The best part of the ride though, was rolling down Sunset, and suddenly realizing, we were riding the whole length of Sunset blvd! Right through Bel Air, Beverly hills, past UCLA, through some swanky cray neighborhoods all the way till... 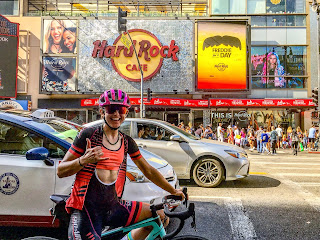 OUR ROUTE TOLD US TO GO TO HOLLYWOOD blvd! Neither of us had ANY idea we were near the heart of Hollywood until we started seeing stars on the sidewalk, and TMZ tour busses! It was the CRAZIEST end to an epic ride ever. I've never even been to Hollywood, so it felt so touristy and funny to be riding my bike through it, nbd!

For all the beautiful and natural places I've enjoyed riding my bike, this was hilarious and fun and awesome in a very unique way. Plus we took the whole lane, so we added to the spectacle! 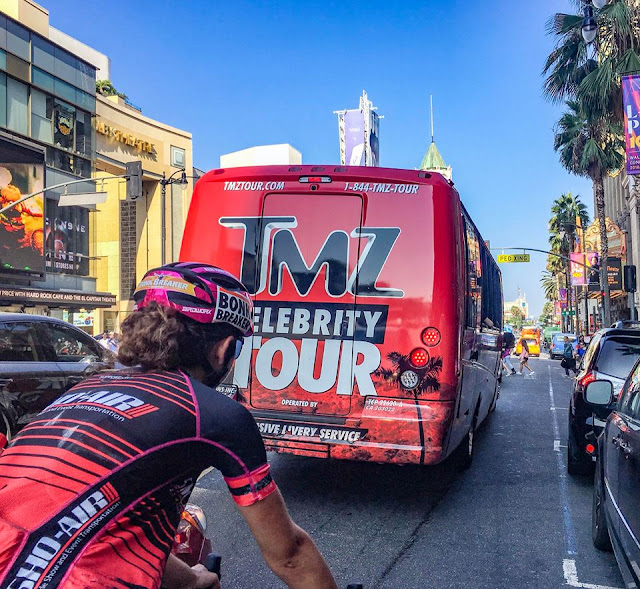 And then dinner at Peddler's Fork, followed by Diddy Reise Ice cream sandos just made the day over the top good. If you want stupid fun/hard route ideas hit me up, apparently I'm good at planning crazy days in the saddle :) 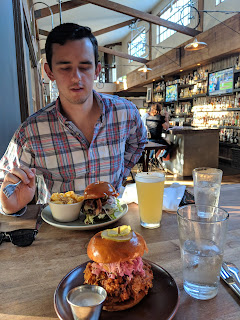 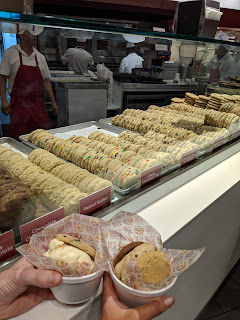 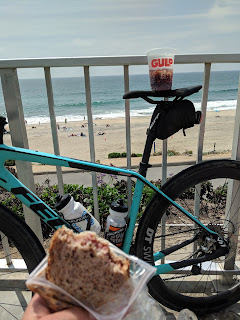 Yep, it's had to be bummed about the school year starting when you spend the last few days of summer doing all your favorite things, with all your favorite people and killing yourself on the bike in the process! One more day of living in excess to put the final nail in my coffin tomorrow. Big Bear HERE WE COME!!!!!! 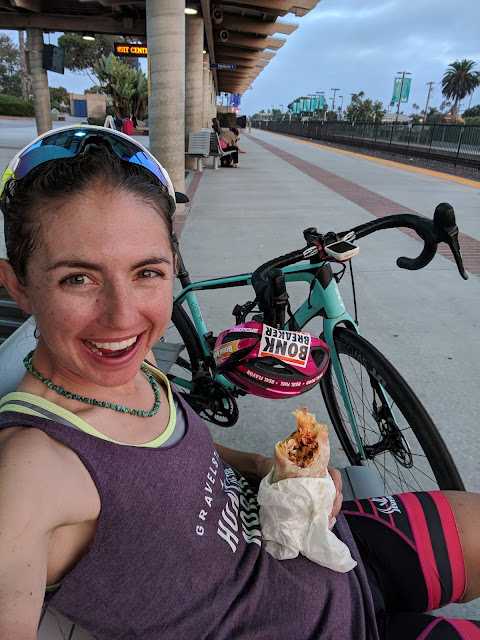