The boys started fast, and at an elevation of 7,900ft above sea level with a 1,500ish foot climb off the gun with no warm up I was quick to let go of my 'finish on the men's podium' dreams once again. I tried to settle, but the cold morning air and competitive bug in my mind wouldn't rest and soon I found myself riding WAY too hard, like usual. Starting too hard at altitude is a dangerous strategy, because you can't really recover from going into the red above 6,000ft, so I struggled with my desire to shred XC pace and knowledge that I was actively sabotaging my race by blowing myself up early. 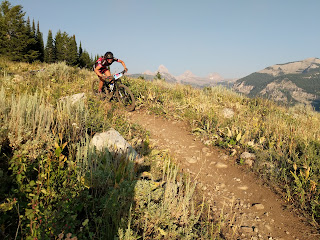 The course consisted of 3 laps each of which was around 32 miles long, and had about 3,500ft of climbing. My real plan was to hit lap 1 hard, get a gap and then maintain that lead for the remaining two laps. Any excessive effort would mean more recovery ground for my body to make up before Leadville in just 6 days, but a win on the day would be my 4th NUE win (of 4) securing the series and a trip to La Ruta in November. Strategy has never been my strong suit, so I spent much of the first lap emptying the tank, thinking about racing XC (where the whole race would be one lap) and railing the downhills to get as much free time on 2nd as possible.

I rolled into lap 2 in the lead but completely unsure of how much I was leading by. Oddly my wrists hurt SO much from pushing the descents so hard. They hurt so much that I was starting to wonder if something was wrong, if I should leave the race to tape them up before hitting laps 2 and 3. I settled into a comfortable pace, hoping I was pushing as hard as the other ladies behind me. I was a bit behind on the eating and drinking game, so I focused on devouring a peanut butter and jelly Bonk Breaker bar and drinking as much Lemon Lime Bonk Breaker hydration mix as possible. The long descent in the first half of the lap basically dropped 1,000ft in 3 miles with 785 switchbacks, all of which you COULD pedal out of.
The hardest aspect of this race was the fact that you could pedal the entire time, if I wanted I could stand and sprint out of every single switchback on the descent, resulting in absolutely NO rest. On lap 2 I actively decided to recover as much as possible, already feeling the effects of starting too hard but knowing I had 60ish more miles to go. Somewhere around the middle of the lap I started passing the 100K racers and that was a HUGE motivation because it meant I got to cheer for all the rad women on course.

At the end of lap 2 I stopped at the feed to grab a few pickles, a cookie and swap my camelbak for 2 new bottles of Bonk Breaker Hydration. I wasn't cramping, but fear that I might and knowledge that pickles help meant force feeding myself, which sounds so strange in retrospect. 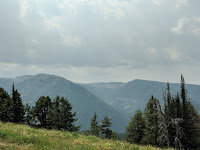 I felt pretty ok going into lap 3. The first half of the lap was my favorite with the longer climb and switchbacky descent, so I settled in and decided to enjoy the heck out of it. Despite falling over on the easiest rock garden and smashing my knee into a rock (thanks to the lady who offered me advil immediately after), I had a blast sailing down '38 Special' and looked up for the first time to take in the stunning views of the Tetons.
About halfway into the lap I saw Robert ahead of me and my motivation to ride hard was renewed as I slowly reeled him in. That and the intel from a volunteer that I may be as little as 5 minutes ahead of 2nd place. After inhaling another 3 pickles and a handful of Bonk Breaker Chews at the last aid station Robert and I cruised into the last 20 miles, which was also the hardest part of the race for me because of the never ending short, punchy climbs. Somehow I was still able to push on the ups though, and soon I was dropping Robert, which made me want to push hard even more. I realize this makes me an ass, but the last portion of the race was basically just an effort to put more time into Robert, who thought he was in 5th overall putting me into 5th. Full disclosure Robert spent a good portion of the trip reminding me how he dropped me while nose breathing on Columbine during Leadville last year, so yeah, I needed revenge.

I crossed the line in 8 hours and 58 minutes feeling pretty freaking good considering!

This race was really freaking fun, but I absolutely could not have done it without the support of a few key sponsors. A puncture on the first lap had me worried I should stop and throw a tube in my tire, but after a little sealant sprayed on my legs and had me worried, the Orange Seal in my rear tire sealed up the hole and I didn't even loose enough tire pressure to have to stop and add air.
This was a rare 100 mile race where I didn't have any stomach issues. Normally I spend the first hour wanting to hurl, or I drink the hydration mix at the neutral aid stations and feel nauseated, or I cramp and have to manage that, but this time my tummy felt great the whole time, not even a hint of cramps in my legs. The biggest difference between this race and others? I ONLY drank Bonk Breaker hydration mix (in my own bottles stashed at the aid station) and I ate a decent amount of solid food, Bonk Breaker bars and chews. I'm so freaking stoked to have found race/ride nutrition that works with my stomach and is so good at fueling my body for such a long time. I honestly think Bonk Breaker deserves the credit for why I felt so dang good on the last lap and was able to continue to push so hard. That and my rad coach who has pretty much nailed it this summer. I'm so stoked to have wrapped up NUE #4 with a perfect record. Not a bad way to begin to wrap up the 2018 summer of suffering and adventure.


Oh and of course we rode Mill Creek trail back to Alta after the race, which blew my mind. Much more on Wyoming and what an amazing weekend we had coming soon.