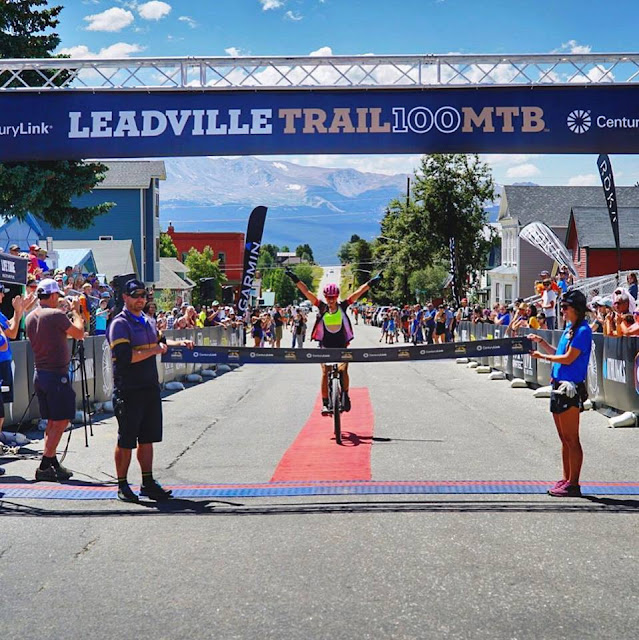 I think the play by play of how the race unfolded is less interesting than all the emotional and technical details that played out on Saturday. This is also the stuff I really want to remember when I look back on my bike racing career 20 years from now, like handing a 10 year old kid my water bottle at the finish line when he had actually asked for my autograph (my brain wasn't working too well and I learned a day later from Lauren that the boy had NOT in fact asked for the bottle, haha). 10 minutes later I gave his sisters my bouquet of roses because I felt bad that only the boy had gotten something and the flowers were the only other thing I had to give. It's crazy how frazzled my brain was, how everything turned into a blur of joy and fatigue, loving the hoopla but also dying for a minute of peace and quiet. 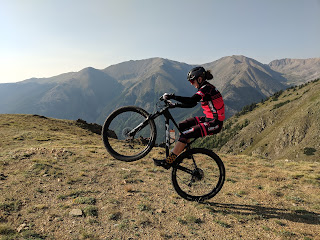 Leadville is a pretty special town and race. This year’s race was errily similar to last year but the summer was crazy different. I didn’t know until early this summer that last year my coach was nervous about how much racing I was doing (I only did three 100 milers in 4 weeks last year), and this summer I was WAY more ambitious about planning my race schedule with 5 hundreds plus a 50 miler in 6 weeks. Racing 100 miles takes a HUGE toll on your body, so although I had a ton more experience with this type of racing, I was also biting off WAY more, and had to spend a lot more time dedicated to recovery. Instead of doing intervals during the week like last year I spent most of the week days this summer resting and going for easier rides. Matt wrote ‘take it easy!’ on almost every weekday ride in July. So the thought of the cumulative fatigue from all those races was definitely making me nervous leading into Leadville. I actually mentally blocked the idea that these races are so tough in order to not freak myself out, which actually worked really well, so well that I started thinking racing 100 miles every weekend was normal, just a little thing, not a big deal, haha. BUT knowing I wasn’t doing intervals made me worried that my top end, my speedy end, wasn’t there like last year. Another difference between 2017 and this year was my mindset. I felt such a sense of peace and contentment with my career coming into this Leadville that I wasn’t really stressed about winning. I didn’t stay up all night imagining having to out sprint anyone, or getting dropped on Columbine like last year, I was just excited to get to race my bike in the morning!
The similarities all played out during the race, climbing Kevins with Robert and Brian, pulling everyone up Sugarloaf, hanging with a rad group across the road and climbing Columbine alone because Robert dropped the living daylights out of me and I dropped everyone else… It felt good for so much of the race to play out the same because it eased my stress from the first 10 minutes where getting spit so far back in the group, and held up in incompetent dude traffic temporarily had me super freaked out.

Another huge similarity was my bike setup. I raced the 2018 Felt Edict again, this time on a regular production frame, not a proto like last year.

I ran a RockShox Sid World cup fork with a grip dual lock out, and a Rockshox Delux rear shock, 100 front and rear. I ran the same gearing as last year, SRAM XX1 one by 12 with a 32 tooth chainring in front and 10-44 cassette (the 44 being a Wolftooth modification).

My cockpit was the same as last year, Crankbrothers Cobalt11 bar and stem, and I also rocked the Crankbrothers Candy 11 pedals because I like the extra little platform for support on long races.

I love the Kenda SaberPro 2.2 tires, raced them all summer, so throwing a fresh pair on my bike was a no-brainer. OrangeSeal has also been in my tires all summer, and it did a fantastic job of keeping me rolling.

Again like last year my Edict had a 125mm KS LEV Ci dropper post, and although some people may think the extra weight is un-necessary, it’s less than half a pound more weight, and it makes the bike more fun on 99% of the rides I do, so I kept it on because I’m no weight weenie, and what’s half a pound!?

The only real change in my bike setup was my wheels and saddle. This year I have been rolling on DT Swiss XRC 1200 wheels, which have been freaking bombproof. I MAY have developed a little more finesse in my riding style, but I’m pretty sure I’m still beating the shit out of my bike descending like I’m being chased by a bear all day every day, and those wheels have performed flawlessly. The Fizik Luce saddle was another HUGEly important update to my race setup because it’s so comfy that I never once thought about my crotch during the race. Considering how much pain I’ve experienced in the past from saddles, it’s insane to look back on a summer with so much racing and to think that after every 100 miler I wanted to ride MORE and the Sunday ‘recovery ride’ was never painful because of my saddle!
As far as nutrition this year I was more dialed than last year, probably where the experience of doing so many 100 milers comes in. I drank 5 full bottles of Bonk Breaker Lemon Lime hydration mix mixed to the recommended concentration. I ate 4 Gu gels, 2 Bonk Breaker macchiato flavored bars, 2 packages of Bonk Breaker Chews, and an Apple Pie Lara Bar. This was a bit more solid food than I expected to eat, but shoulder/back pain prevented me from being able to reach my food easily, so I just kinda took whatever I could get my hands on each time I reached in my pocket. Normally I would slam Gu's until I get sick of them, but started and ended with solids this time, not by choice, but it seemed to work pretty well. I started to cramp going up the pavement on the last real climb, but focusing on drinking and eating the chews helped LOADS and I finished crampless :)

The absolute highlight of the race was hearing everyone in the feed zones and on Columbine cheer for me. Each feed zone was basically a 250 meter stretch of road lined with people and tents, the pipeline and powerline aid stations had 200-300 people in them, plus the 200ish at the base of columbine. And a LOT of those volunteers, crew, family members of racers and spectators were yelling my name, I felt absolutely famous all day! Mountain bike racing isn’t a mainstream sport in the US by any means, so to have SO many people out there cheering for you, knowing who you are, stoked you are winning, it’s special. It was flattering, and humbling in a way I can’t put into words, I’m so unbelievably grateful to everyone who has supported me through this journey, and to then also have so much support in the form of cheering and encouragement and stoke on the course, it gave Robert goosebumps 😊 haha.

I savored every second of rolling into the finish with the moto escort, this is one of the few races where I get to feel so cool. Even though my jersey zipper broke resulting in  me looking like an absolute dufus crossing the line fully unzipped, I also savored rolling across the red carpet at the end. Brendan surprising me with an anniversary present was another highlight I never want to forget.

It's a strange feeling that almost a week has passed, that everything I worked for this summer is over, and the school year looms less than a week away. Currently trying to stave off post event depression with my favorite scone and coffee in the OC after the best massage from magical Steph early this am. A handful of races left in this calendar year and then some very different goals are on my horizon. As long as I focus on gratitude for where I am, I'm sure each year will continue to be the best year ever. Thanks for following along :)