Why did I think that was a good idea?! Haha

It's incredible what a difference a day makes. Incredible how the mind can forgive and forget the pure torture I put my body through Saturday, the agony and misery... it's like a distant memory already.

But before the memory fades, I want to jot down some thoughts about the Tatanka NUE, the race that brought me to tears, more than once, possibly the most painful experience of my life.

I don't even know where to begin this story because the amount of suffering was so great, it started from the start line and continued for 9 hours. It consumed every corner of my body. This was one of few races I've ever done where I just stopped on the trail, multiple times, wondering how long I could just stand there before 2nd place caught me, where I decided less than halfway in that just finishing was going to be enough to make me proud of my effort.

The Tatanka NUE is a 90 mile ultra endurance race on the National Ultra Endurance Series calendar which takes place in the Black Hills National Forest in south western South Dakota. Tatanka is Lakota for 'big beast' or buffalo depending on who you ask. I'm going to stick with the beast option because this race was a beast and a half! The course took us up and over and through the Black Hills on beautiful fire roads and incredible singletrack. There were portions of trail that reminded me of racing in Brazil, incredibly verdant, with creek crossings and a smattering of sharp rocks always under our tires. Other portions of the course had us snaking through lush grassy hillsides, the green so bright it was almost blinding. I didn't come to SD with any expectations, but I left in awe of the beauty of yet another incredible state my bike has taken me to.
I knew from the gun that this race was going to be about pacing, eating, drinking and perseverance. The forecast called for 100 degree temps, the course had 15,000ft ascent in three unique laps (although it seems they cut a bit out to help aviod killing us), and my body wasn't recovered from thinking I could race the Firecracker50 in Breck at XC pace three days earlier (at 9,000ft elevation!).

When the neutral roll out was over and we turned left onto the first dirt climb I let the men ride away, a strange feeling, but to be honest I don't think I could have kept up even for the first 10 miles if I had wanted to. My body felt dead. I drank and climbed and drank. The miles ticked by slowly. 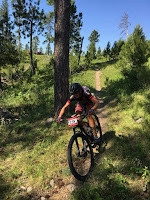 The first of the three loops was a 50 mile beast of a start, with 8,000ft of climbing. I was pretty numb for most of it, alone and scared about the pain I would experience later in the day. 25 miles in we hit the highest point of the loop, and the main aid station. I stopped to refill my bottles (something I NEVER do during races, but I didn't have Brendan with me to hand off bottles) and to gratefully accept an ice towel around my neck. Then I was flying down a crazy steep, rad trail with a ton of jumps that almost took me out over and over. My feet started hurting before the first loop was over, and the deep feeling of despair that I may not have what it takes to finish set in when we were grinding up a sandy hill in a strange/beautiful ravine full of HUGE cows that were making the sounds my muscles would make if they could make sound (think cows giving birth haha).

Rolling out on the second loop was a no-brainer, although my body hurt already, and temps were soaring, it didn't make sense to quit only 50 miles in. The second loop began with an epic road climb, of which I was blissfully unaware when the pavement pitched gently up. It was gradual enough at first to not seem like such a big deal, until 20 minutes later, in full exposure to the sun I was starting to loose hope. Thoughts of heat stroke were in the front of my mind, I wanted to vomit but had nothing in my gut to follow through the desire, and eventually I resorted to tacking all the way across the road. A spring in the hillside gushing with icy cold water came to the rescue just before the end of the climb, and after sitting in the water for a minute I convinced myself that calling 911 wasn't necessary after all.

Sometime later I was descending alone, convinced I was supposed to be climbing still, and stopped in a panic that I was loosing elevation unnecessarily/that I missed a turn. After playing a solo game of Marco-Polo for 5 minutes, and struggling to find a map of the course on my phone I realized that I was in fact going the right way and un-enthusiastically continued descending, knowing every foot I dropped was another foot I would have to climb. Fortunately, after an unreasonably long stretch of JUST dug trail (no joke, it was like they cut down the plants for the trail on Friday) I found myself with two other Epic lunatics and hearing their despair made me feel a little less alone. Somehow it helped me to spend the energy to encourage them, and soon-ish we were at the aid station with the ice towels again. This time I straight up SAT down on the cooler, and shoveled watermelon and pickles in my mouth, committed to not leaving until I felt human again.

The rest of loop B was a blur of pain and cramps. I would drink and drink and drink, the cramps would subside and then creep back in. Near the end of the lap I noticed my front tire had lost a TON of air and stopped to hit it with a C02. The course was littered with sharp rocks, so it wasn't really a surprise that after bombing all the descents like a bat out of hell I would have a puncture. Fortunately the Orange Seal in my tire held for the remaining 20 miles of the race, giving me no mechanical excuses to drop out.
Rolling through the start finish at the end of B loop/start of C was hard. I was praying hard for the second half of B that the organizers would make the call to not force us to complete the final 13 mile loop, or that all the other women would have dropped out, making it un-necessary to complete the last lap to win. Sadly no one said anything about cutting the course short, and somehow (I am honestly still shocked at why) I managed to get back on my bike after more pickles and bottle re-fills to knock out the last 13 miles.

Lap C was ugly, and beautiful. My body hurt every inch of every mile. From my big toes to my lower back, to my head, everything screamed in pain, and at 1 pm the heat wasn't letting up. I crawled up every climb and put as little effort into every descent as possible. On the second climb I silently thanked a random dude doing one of the shorter races for blocking the trail, causing me to have to dismount and walk. The cramps in my hamstrings were barley manageable. Ad we climbed I committed to stopping at certain mile markers, and somehow pushed through most of my mentally planned stops. 7 miles from the end another Epic lunatic dude caught me and informed me there was only one small climb left, causing a wave a relief to pass over me (although he was wrong...). I let him ride away from me and thought only about steady forward progress, counting down every tenth of a mile to the finish.

When I hit the actual last climb though the wheels came off the bus. I could see rando dude way up above me through the trees, indicating that I had a lot of climbing left, and the despair suddenly was too much to bear. I stopped behind a woman doing a shorter race and just started sobbing 'I can't do it' Having raced a few ultra endurance races at this point, I know the power of positive self talk, that the mind is stronger than any muscle in the body and that often the lies we tell ourselves can help up achieve unthinkable things, but this was absolute next level suffering. I sobbed in gasping breaths that I couldn't do it, over and over. I sobbed as I pushed my bike around switchbacks, the last three miles seeming like a marathon of their own. When the trail FINALLY pointed down again I begrudgingly got back on my bike and coasted the final mile of trail. And then when we turned onto pavement I pedaled as little as possible to make it to the finish.

It took more than an hour for me to be able to walk again without feeling like I would pass out. I alternated between laying on the ground and sitting while the nicest humans on the face of the earth brought me (hot) pickle juice shots and ice towels. Although it was such a relief to be done, and a shock that I had stuck it out, the pain in my body held on long enough that I feared I wouldn't ever leave my spot laying on the ground.
And since this is already the longest recap of any race I'm going to stop here for now. I have more thoughts and feelings about Tatanka, I think I may have learned some things that are worth sharing, but right now I'm going to be smart and prioritize recovery. It's time to squeeze my legs (again, thank you Elevated legs, I've been addicted to squeezing my legs this weekend) and take a nap.