Smiling More (I know, I know, is it possible?!) AKA High Cascades Recap

You know what I love about ultra endurance racing?! No matter who you are, no matter how you place, everyone who FINISHES the race is a rock star bad ass who just accomplished something amazing! And I think this was the coolest thing about High Cascades100, the race really focused on celebrating everyone's accomplishment, even the people who crossed the finish line at 7pm during the awards ceremony 13.5 hours after the start. 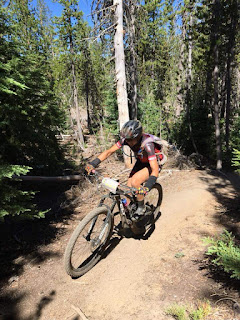 My legs and body felt awesome when we turned off the pavement at the start of the first of two long climbs on the course though, and I just kinda went with a 'race your own race' mindset where I made an effort to pace myself, but allowed the good feelings in my legs to carry me through the first half of the day. I ended up having one of those magical mystery races, where my legs and heart felt light and powerful all day, a sensation I wish I knew the explanation for, so I could get those sensations every time I race! (although I'm sure this time coming down from 10,000ft to 3,000 may have had something to do with it) We climbed a thousand switchbacks and ripped down Twidlywinks trail, before trudging up the sandy freeway underpass climb, and then crusing up another long stretch of beautiful winding singletrack with glaciated volcano views and dense evergreen forests. At one point I started to understand why some people believe in Bigfoot because the trail was climbing through a dense forest of massive trees which was equally tranquil and un-nerving. The second half of the race was mostly down hill, including another rip down Twidlywinks.

Aside from being quite confused about the course markings a few times, and waiting for the next person to confirm I was going the right way, plus a hard crash on a sandy fire road, the race was just a beautiful 8 hours of riding my favorite bike in a beautiful place.

At the end I got a bit paranoid that Carla, the super fast chick, was going to sneak up on me and finish super strong, (I did my research which informed me that she is really good at pushing the pace at the end of races, like Chase) but I continued to push myself and crossed the line in first still feeling pretty dang great! 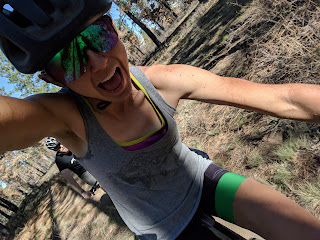 And the smiling thing. Well flying out to this race with some anxiety about racing so much every weekend with travel and only 6 days to recover from Breck I kinda had a reset moment. The anxiety, manifesting itself as a stabbing pain in my left shoulder blade was really starting to concern me. And sitting on the shuttle from the parking lot to the airport I realized 'I'm going somewhere new again, a giant hunk of steel is going to carry me to this cool new place, and I get to see good friends, race bikes all day and eat amazing food' WHAT is there to be anxious about?! So I just started smiling as I was walking through the airport, standing in security, and boarding the plane. And when I woke up Saturday morning my shoulder didn't hurt and my back felt great for the entire race! It's amazing what a little mindset shift can do, how the stories we tell ourselves and the things we think about can impact us in both good and negative ways. How just choosing to smile shifted my experience from stress to joy. And the best part is that looking UP, not at my phone, and smiling through the travel meant I actually SAW so many people, going places, which made the experience of traveling WAY more beautiful.

I am so unbelievably lucky to be living this great adventure this summer, to be away from home for 6 weeks of racing and riding and eating my way across the western half of the country. Thanks ShoAir Cycling Group for making this summer possible. I raced my heart out on Saturday, and can't stop smiling about the opportunities my bicycle has brought my way!

I also need to give a HUGE shout out to Sagebrush Cycles in Bend, OR for letting me come use a little shop space to work on my bike/helping me get those stubborn new brake pads in. You guys were RIDICULOUSLY helpful and nice, thank you so so much!!!!

A more traditional style recap of the race (more play by play action)...
By the time our rowdy group of crazies turned right onto forest rd 4130 to begin the first serious climb of the day my nerves had finally subsided enough that I could breathe. The massive cloud of dust engulfing us was a hilarious distraction from the fear sitting heavy in my mind that the 2017 NUE overall winner was in the MASSIVE women's field, that I didn't know if I had what it takes to beat her. Pretty quickly the survival mode that usually settles in much later in these long races kicked in, shifting my mindset from 'what's the strategy to win?' to 'race your own race and survive this ridiculous dust trail'. I found a nice rhythm, focused on staying with the duders in front of me, and soon enough we were at the mile 38 aid station where my husband (who I hadn't seen for a month) was waiting with a bottle and a smile. Seeing him was a huge boost in the joy factor, and I  powered on up the second long climb knowing I would get to see hubs again at mile 82. Somewhere on the climb to the high point of the course I ended up alone, very very alone. I started understanding why people believe in Bigfoot as the trail wound it's way through the massive trees, in a forest straight out of a fairy tale. After that climb I spent a LOT of time not sure if I was going the right way, so I waited a few times for the next dude to catch me and confirm I was on the course. A pretty severe side cramp prevented me from eating from mile 38- 85, less than ideal, but the pain made it impossible to reach in my pocket for food. I also crashed hard on the sandy fire road descent, which was funnier than it was painful. Why do I only crash on fire road?! During a quick stop at the hubby aid station, in which I inhaled a PB&J and an $8 whole foods energy bar (my husband doesn't look at prices... it's terrible) I was informed that Carla was only 20 minutes back the first time through. Knowing she finishes strong sent me into a panic, and I took off, hoping to stay in the lead just a little longer! A few dudes passed me in the next 15 miles, all of which I was CONVINCED were chicks when I saw them from a distance coming up on me, but was SO relieved to find to be men when they got close enough to pass. I rode my little brains out on Tiddlywinks, which was SO FREAKING fun even when I was tired, and then cruised into the finish with two random dudes somehow still in first! This was one of those freak races where I still felt alive at the end, no laying on the ground this time! In comparison to some of the recent 100 milers I have done this one was WAY less painful. Although my Garmin still registered 10,400ft ascent it never felt like we were climbing (too much) and the weather was so freaking perfect. One of the things I tell myself when I get anxious about racing is that 'I GET to ride my bike for 8+ hours today!' and this race really felt like GETTING to ride fun trails with cool people in an awesome new place! Thanks Mudslinger Events for putting on such a rad race!