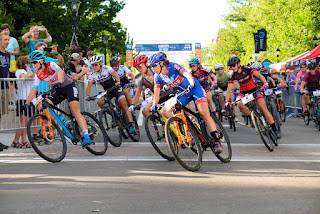 As I rolled into the Spooner Lake aid station at mile 20ish of the 52 mile Carson City Off Road on Sunday one of the crew members for another rider yelled 'What's the quadratic formula?' at me, and after a brief second of absolute panic that somehow I DID NOT KNOW the quadratic formula I burst out in song 'x equals negative b, plus or minus square root...' to the tune of pop goes the weasel. AND then for the remaining 32 miles that dang song was stuck in my head and I felt like one of my students studying for an algebra test.


Carson City was the third race in the Epic Rides series, on a course which took us up one massive 7,000ft climb to the top of the mountains on the east side of Lake Tahoe over the first 35 miles and then plummeted us back down again in one big 15 mile descent. It was freaking epic. Much of the 52 miles of the race saw us racing on trails etched into the sides of mountains with sweeping views of Carson City, Lake Tahoe, the Marlette/Tahoe double lake situation and endless forests of pine trees. It was ridiculously pretty, endlessly ridiculously pretty. Basically I was super pissed off most of the time because I borrowed Brendan's Camelbak, put my phone in a ziplock baggie in a zippered pouch (it rained on us some, so wanted it to be waterproof) and couldn't get to it to take pictures. This probably helped me a lot though, because had my phone been in my pocket I would have taken A LOT of mid-race pictures, despite all the flack I've gotten in the past for such antics :)
And here's how the race played out. The rain started as we made our way out of town. The group of us rolled though neighborhoods quietly as cold rain came down and when the pavement pitched up nastily I prepared myself for some agony. I expected the first half of the race to hurt as much as the first climb at GJ, but oddly it never really hurt that much. I sat behind Chloe, Evelyn and Katerina, waiting for it to hurt, and it never did. We pushed hard to the entrance of Ash to Kings trail (the hole shot that I wanted to have good position for) and as we dropped into the trail there were only three of us off the front, with a nice little gap to the next group. I was freaking ecstatic, but a little stressed that Chloe and Katerina didn't seem to be riding hard enough to keep the other girls away. Where I normally would have obsessed over the fact that we were getting caught by the next three riders I told myself to calm my mind, there was a long long race ahead of us, it was ok to have a group of 6. I kept a quiet, peaceful mind for the length of Ash to Kings, cautiously excited that I felt so good.

At the very end of the singletrack I tried to mini-jump a rocky section and kissed my rim on a rock instead. While I was running higher tire pressure than normal (since I was on the hardtail and heard there were a lot of rocks) I still managed to somehow poke a hole in my tire in the worst place, right near the rim. As we turned onto the fire road I asked the spectators if I had a flat, but soon knew by the squishy feeling below me that I did. After hesitating for a few minutes and continuing to ride the squishy tire I stopped and hit it with a C02, hoping the sealant would plug the hole. Sadly it couldn't reach the rim as I continued to pedal up the fire road, and I had to let 4, 5, 6 place go and stop again to actually fix the problem. Shaking the bike upside down and sideways didn't seem to get enough sealant in the hole to plug it, so after a second C02 with no luck I had to beg every rider who passed for a spare. Fortunately Megan Chalf was coming up the road at this point and she gladly stopped to lend me a C02! MY SAVIOR!!!! I pulled out my 'Samari Sword' barplug with a sticky tire plug loaded on it for quick flat fixes (hahahahaha, something Brendan bought me that I thought was kinda redic but actually worked so so so well!), shoved it in the hole and hit the tire with a third C02. This time IT HEALD!!!!! And I was back on my bike pedaling up the fire road as fast as my little legs could go.

A LOT of ladies passed me when I was stopped, so I kinda just let go of my expectations for the race and settled into a nice rythm of pedaling hard enough to reel in each rider I saw up the road. I was super bummed at first since I had felt SO dang good up until the flat, but I thought about all the pro riders who inspire me and what they do when they have mechanicals in races. If Jolanda or Emily Batty got a flat in a World cup they would still try to win, so I decided to give it a go and see what I could do with the less than ideal situation.

By the top of the fire road, as we rolled into the first aid station I had somehow caught all but the lead group of 4, and was shockingly 45 seconds behind the leaders. I was really really suprised, but very worried I had ridden too fast and caught them too soon, which might mean blowing up before the last 2,000ft climb to the high point of 8,600ft above sea level.

I didn't have to worry too long though because right about then is when the dude in the feed zone asked me what the quadratic formula was, which was both awesome and awful because it distracted me from being worried/stressed but it also got that DAMN SONG STUCK IN MY HEAD for the rest of the race! It's not like I didn't spend enough of the school year singing that dang song! Then I saw Brendan and was stoked to tell him I had made use of his barplugs!

Soon after the feedzone I caught a glimpse of the lead group of 4, and slowly reeled them in. How the actual heck did I catch the leaders after being stopped for so long?! This was a HUGE confidence boost, and I took a minute to freak out in my mind, and just as I finished silently celebrating Katerina attacked and her, Chloe and Evelyn rode away from me! The agony! All that work, what a tease!


So I continued to race my own race, conscious of the elevation and not wanting to go into the red before the last heinous pitch. When I got to the Flume trail there were no course markings, and having not pre-ridden I had NO idea which way to go. I had to stop and was about to pull out my phone to look at a map when I saw a dude with a number plate on the trail below me. Hoping I wasn't hallucinating I dropped into the trail. Flume trail provided another good 15 minutes of extreme frustration as I wanted so badly to take pictures, but couldn't get to my phone. Also not pre-riding that section meant I was a little freaked about hitting my bars on a rock and falling off a cliff to my death, so I went the safe route and didn't pin it.

The climb following Flume didn't hurt as much as I expected, I started cautiously hard and waited until I was pretty sure we were near the top to empty the tank (which looks like a sad sort of effort given the elevation). And then it was all pushing as hard as possible on trails I had never ridden screaming downhill to Carson City. Some of the fire road was crazy steep with ruts, so I was channeling Carl trying to ride the shoulders of the ruts as fast as possible. I almost died like 4 times, and am shocked that despite smacking my bars on trees, and clipping my pedals on rocks I stayed upright and made it to town in 4th place!
Overall it was one heck of a good weekend, complete with the most amazing meal at a farm to table restaurant in Carson City we stumbled into on accident, a result I'm super proud of because it came despite adversity, and plenty of time spent with good  friends and Roger. Thanks again to EpicRides for continuing to blow my mind with your outrageously fun, scenic races! I don't know how you do it, but every race is better than the last! 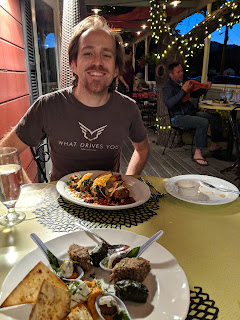 Any weekend spent in the van with this boy is a good weekend! From our accidental fancy date Friday night at Adele's in downtown Carson City
Posted by Ms Lariss at 8:07 AM