Traveling to new places under the power of my own legs is the number one reason I, as well as pretty much everyone else I know, loves bicycles so damn much. There's something special about using your body, the muscles and tendons and capillaries and synapses firing in your brain, to move oneself farther and farther away from home, to places new and exciting, remote, and rural.

One of the neatest aspects of my friendship with Carl is that not only does he share my almost desperate need to get out there, to ride as far as we can from life and responsibility to places beautiful, rugged, and undiscovered, but he also has a knack for creating routes that allow us to do just that along with the physical ability to actually complete these rides with me. Over the past 5 years we have ridden hundreds of miles through some of the coolest places in Southern California. And the best part is, as we are climbing that random dirt road in North East San Diego county we will look to the left and see ANOTHER dirt road, and wonder 'where does that one go?'

This is the story of 'that one dirt road, the one off Black Canyon rd'

I've started at it a few times, on a ride or two with Carl, and in both editions of BWR that I have completed. It's a fire road, it heads North West. We could never really tell if it was smooth or gnarly, road bike friendly or requiring more tread, if it was a dead end, or if it led somewhere amazing. But Carl and I have been plotting to get back out there to check it out, some day.

On Saturday morning I showed up in San Elijo unannounced for the Italian Sausage Ride. Finally having a weekend home meant I got to spend Saturday playing bikes on what I was promised would be one heck of a route, don't bring your road bike, 52% dirt, 130 miles with 12,500ft ascent.


Cliff organized this BWR style ride, and choose the delightfully masochistic loop which took us through Ramona to Julian by way of an epic climb and then back to San Elijo via that one dirt road I always wanted to explore.

Although I had been under the impression this was a friendly group thing with multiple stops for water etc, somehow the front end turned into a race the second my Kenda Flintridge tires touched dirt at lake Hodges. The two dudes on mountain bikes threw down the gauntlet and by the time we resurfaced on pavement there were only 5 of us left (of the 20 something who started). Of course I continued to lay the hammer down up highland drive, I was determined to drop the mountain bikes, and as a result we were down to three when we rolled into Ramona.

After a quick bottle refill Brent, Ryan and I rolled on towards the biggest climb of the day. We were soaking wet from the light rain that fell on us for the first 2 hours of the day, but super grateful that it wasn't 90 degrees. The sun poked through the clouds as we dropped into Swartz Canyon county park on a sweet dirt path which stole almost 1,000ft of elevation. When we hit the creek at the end of the path we were at the bottom of an incredible canyon and a 3,000+ft climb, one straight unpaved shot all the way to Julian.

The next 20 minutes are the reason Cliff said 'don't bring a road bike'. We scrambled up and over an endless pile of rocks for the first thousand ft of the climb on a relentlessly brutal but mind blowing trail with this stunning view of the canyon we had just crossed. Every time I thought to grab my phone to take a picture huge rock problems would pop up and it took all my strength/bike handling skills to stay upright. It was like cross bike monster truck riding, so much upper body English to lift the front tire then power over the rocks.

Frustratingly I got dropped by Ryan (who was riding 2.0 mtb tires) and Brent, so when the trail spat us onto a dirt road I had to chase hard to catch up. With 2,000ft of climbing left I settled into a leg numbing pace and I soon caught up, then dropped Ryan (hehe). I tried to drop Brent, but that guy is stupid strong, and my miscalculation of where the climb ended resulted in a poorly timed final dig the didn't pop Brent but did cause me to blow up. As the climb turned to rollers at the top I came unglued and let Brent ride away, cursing him in my mind. I was SOAKED, this time from sweat, when we reached Julian. 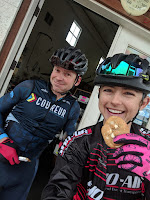 We weren't even halfway through the ride yet, but I scarfed down two cookies and half a sandwich, and loaded up on hydration before we rolled out, shivering because it was 40 degrees. Our next piece of dirt heaven was in Santa Ysabel Preserve, another chunk of land I have stared longingly at on rides that took me along Mesa Grande. The preserve was a wild mess of cow trails through super pretty oak woodlands, and thank God it was so pretty because some of the climbs were leg busting steep, and loose! More than once I found myself shouting 'HOW IS THIS REAL!?', basically existing in a space of mind blown euphoria the whole time we were in the preserve. The final descent out was a giggle inducing roller coaster of a joy ride that had me thinking 'well, t's kinda like I rode mountain bikes today!'

We turned right onto Mesa Grande out of the preserve, pedaled the pavement a little and then dropped into Black Canyon, a dirt road I've only ever gone up. Then, after a ripping fun descent, we turned right onto that road, the one I always wondered about. It was magic. There is something about heading into the unknown, no map on my computer, no idea where it would lead. The dirt was awesome and it took us across and then up, and up and up. I was struggling with my jacket when we started climbing (the temp was back up in the pleasant to warm range) and although the boys initially waited for me, they didn't wait really enough because I was instantly dropped, probably needed more food and then chasing on the down hill. At some point I was struggling between gaping in awe at another amazing view and trying to ride ridiculously fast down a rutty sandy descent when my front tire washed out. The mini crash really set me back, so I stopped to take a picture, it was too good to pass up.
The boys didn't wait for me this time, so when I got to the next intersection I had to ask some cowboys where the bikers had gone. After that I got lost a lot. At the next intersection I had to stop and upload the route on my Garmin, almost missed a crucial turn which would have meant missing the longest, most epic stretch of singletrack of the day. Fortunately mountain biker guy rolled up as I missed the turn and showed me the way. Then it was trails and views and mind blowing fun for miles and miles, in a place I never expected there to be epic trails. The best part was that this stretch of dirt helped us avoid an annoying paved descent with cars speeding by or getting frustrated when you take the lane. The dirt fun ended just up the road from Sandy Bandy, a dirt sector in BWR, so everything was familiar again as we rode around Lake Hodges. 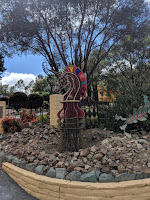 After the lake I got lost a few more times, every time mtb guy would roll up and show me the way, and then I would accidentally ride him off my wheel. But then he was in front of me and I got lost in the strangest place, where the 'correct route' was to scramble down this broken concrete thing, and it looked so wrong, but apparently that was the right way. I spent a good 20 minutes trying every other option without success before finally climbing down the concrete thing and realizing that was in fact correct.


And then I was heading up Questhaven on the last climb of the day almost back to the van. I took the picture of the horse art on Questhaven because heck, why not take more pictures? When I rolled into the parking lot where we had started 9 hours earlier my legs were good and tired, and mind full of amazement at all the open space, bike paths and natural beauty in San Diego county, and my heart full from a day spent exploring. 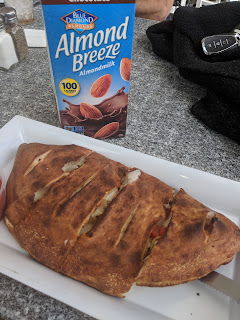 Thanks for an incredible route Cliff. That ride lived up to the hype for sure, especially in quality dirt crushed with cross bikes. One Calzone and half a gallon of chocolate almond milk later and I was a happy camper on the drive back to Orange County. Every ride I do in North county makes me wish I lived in SD a little more each time.