If you've been following along on social media you know that life has been a little rough in my neck of the woods lately. Between loosing my grandma, to crashing hard between intervals last Tuesday (resulting in a massive rash of most likely infected missing skin), plus flying out of state three weekends in a row for races and the funeral I knew full well going into this weekend that I may not have the legs or brain power to put together a stellar race. 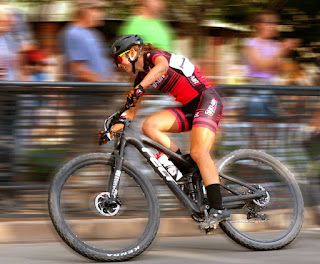 Nevertheless, I still freaking love racing bikes, and having bought the plane tickets and regged weeks ago, before I could anticipate all the things happening, I jumped into GJOR weekend full speed ahead.

The format of this race is a lot like the Whiskey 50, a fat tire crit around town on Friday night, followed by a 45 mile back country mountain bike race Sunday, but this time in the super rad college town of Grand Junction, Colorado, the biggest town in western CO. A side note, I've driven through GJ many times and never really thought much of it, but spending three days there really opened my eyes, not only is there phenominal mountain biking, but the town is rad as heck! I will never use it as a pit stop again. Best part? I heard locals saying the race doesn't even go on the most fun trails! HOW IS THAT POSSIBLE!? I thought those trails were AMAZING!!! Ok, back to race recapping :)

Having never ridden in Grand Junction Colorado before (HOW? HOW have I never ridden there?!) I wanted to see as much of the course before Sunday's race as possible. I was told that I needed to ride the first quarter of the race, a network of technical desert single track with some rock problems and option lines, as well as the descent that followed, a 6 mile black diamond rated trail deceivingly named butter knife (should have been named butcher knife if you ask me...). On Friday, before the crit I rode the first 10ish miles of the course, plus the pedal from my host house, plus the ride back to town, ended up being a 22 mile ride, in the heat of the desert, over the course of 3 hours because I stopped to talk to a lot of people. Not really the ideal prep for a short, fast crit in the evening. But skipping the fat tire crit earns you a 5 minute time penalty on Sunday, so I was at the start line, cracked but smiling at 6:15 anticipating a heave serving of agony.

And that's what I got. After 20 minutes of chasing with dull legs and searing lungs (yeah, 4,500ft is altitude to me) I decided it wasn't worth it to suffer anymore and pullled out with 5 laps to go. More on this decision in a future post, hopefully. Anyway, it hurt.

After another too long pre-ride Saturday (yeah, I know par for the course) Sunday's race FINALLY came around and I was excited to go ride bikes hard on fun trails. To be honest I was also quite nervous that the same issues I had at nationals would resurface, but more on that later as well.


The start of the back country race was fast, and after knocking bars and jostling for position with the lead group of 5 for a bit I decided to race my own race and back off a bit. The pace was high enough I was worried I was going to blow up, and I kinda thought the other girls chasing Katerina would too (unfortunately only one of them did).

My strategy seemed spot on when I caught the group on the Butterknife descent, and I was stoked to be rolling along the river in the chase group, only Katerina up the road.
But when the dreaded Windmill climb began (it's a 2,000ft climb that starts out gnarly steep and then just tortures you for an hour) I had to let Amy, Crystal and Evelyn go again, because their pace was going to murder me. At this point I was in 5th, and hoped I could make up time after the climb somehow.

Following Windmill, which seemed to take FOREVER, we got to descend this awesome jeep road which turned into 'please just stay alive' style fun. I hadn't seen this portion of the race yet, and I went off some surprise drops which was both crazy fun and terrifying. As I was trying to not die local shredder Alexis Skarda caught me and proceeded to pass me like I was standing still. I was both shocked and out of my mind stoked because I thought I was riding fast, but she just PLOWED through shit piles of rocks like it was nothing, leaving me with that 'one day I want to be that good' feeling. That was the highlight of the race for me. But then I was in 6th, poo, off the podium!

At the bottom of the descent though I caught Crystal and had a renewed hope! Until the course turned straight up the longest exposed slickrock climb I have ever seen! And as Crystal and Alexis rode up that damn rock away from me the possibility of standing on that podium pedaled away with them. My body wasn't into putting out power and going up hill fast. 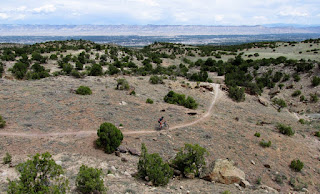 For the rest of the race I focused on having as much fun shredding gnarly rocky trails as possible, launched my bike off tons of drops and little jumps and living in the sheer fun of flying down new trails at break neck speed.

It got a little terrible at the end, when I thought it was 'all downhill' and it most definitely wasn't, but I crossed the line with so much mountain bike stoke  it didn't matter how much the race beat the living daylights out of my body, or that I didn't podium.

And this is the part where I say that I am incredibly stoked on my DT Swiss XRC 1200 wheels. I did a fair bit of blast plowing the rocks and they stood up to the test of my abuse perfectly. Credit also goes to the Kenda Saber tires that I rely on for dry races, they are clutch, and when they are filled with Orange Seal I know I don't need to worry about flats.
And thanks Taryn for lending me your ultra running camelbak. It was so light weight and rad and I would have DIED without it, all that technical single track meant it was hard to drink from my bottle! And extra thanks for the milkshake you brought me, I came back from the dead drinking that, sugar FTW!

And of course I have to end this post with a picture of the AMAZING tacos we ate at a restaurant called, wait for it, TACO PARTY! Awesome tacos, good friends, amazing mountain biking... yep, it was another best day. 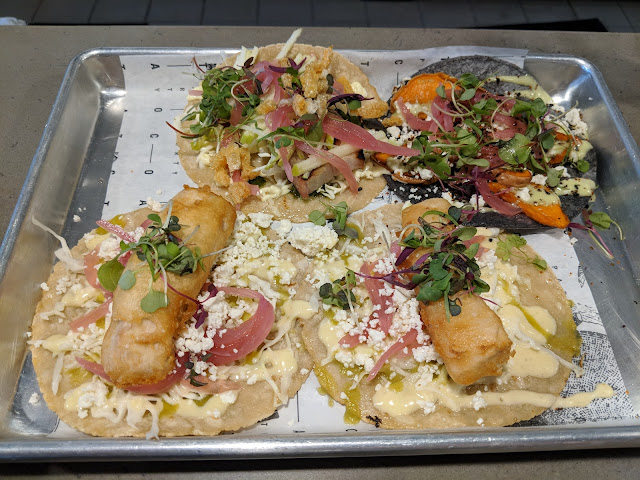