Life Lately (I wish I was a better blogger edition)

It's not that I don't want to sit down and shoot out quick updates about training/racing/life multiple times a week...

But I realized this week that we are just in a particularly busy season of life with bathroom remodel in full swing/running into our deadline, training, and work. I think it's important to step back and acknowledge sometimes that life is busy/stressful/tiring but that it's not always going to be like this. Just stopping to recognize this simple truth makes me feel so much better about everything. Like in yoga when you breathe in deep, and breath out the stale air, releasing the stress and negative thoughts, accepting that this is where I am, and all I can do is keep my head down, work hard, and eventually things will get easier.

Maybe I am also the type of person who tends to pack life full of things to do and places to be, so I bring this stress on myself. But I think the commitments, dreams, plans and goals that cause my life to get overwhelming sometimes also result in many #bestday moments and give me the opportunity to meet/work with so many amazing people, and to go to so many amazing places/do awesome things. I have to admit though that I have struggled with feeling like I am letting people down all the time this winter/spring. I have a hard time recognizing when I am over committed and say yes to things sometimes when I really should say 'I'm too busy already'. If you are one of the many people I said I would coach, help, plan riding route for, etc and then flaked, I am sorry. I'm learning to say no, sorry, too busy, but def not learning fast enough.

So on this unexpected 'rest day' Tuesday (I NEVER have Tuesday off the bike, I must have raced hard this past weekend!), when I finally had 20 minutes to nap after school and a few minutes to blog before doing more house work I am basking in the stress of this life and focusing on the glorious craziness of it all. And promising myself I will blog more soon, as soon as the bathroom is functional and not taking up every spare second of our time.

So here is a quick update on what I've been up to since blogging last.

Lots of riding bikes with these weirdos Monday, Wednesday and Fridays. High school mtb season is in full swing, and training the shredders on the Laguna Beach Interscholastic team has been crazy fun/gratifying this year. 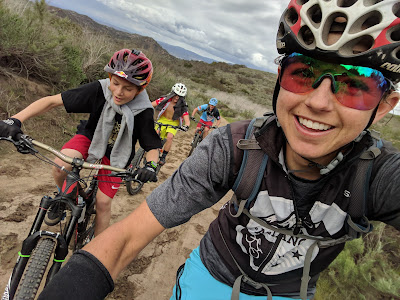 Lots and lots and lots of training, including some crazy challenging workouts that have pushed me to step up my mental game as well as tear my legs apart. Thankfully the pain is temporary and riding mtb in Orange County in the winter is pretty much the best thing ever, so as soon as the intervals are done the #bestday vibes continue. Extra bonus when the intervals take me up and over Harding Truck trail, resulting in epic views and a 10 mile descent to get home. 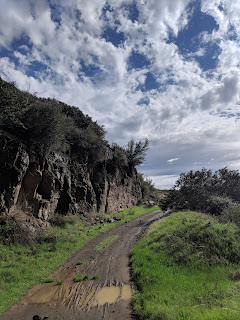 Two weeks ago I did a little local road race called Hunkr. the race consisted of 3 laps (60 miles) of the road I commute on every day. The fact that it was mass start with the dudes made it pretty freaking scary, but it was great seeing/racing with all the coolest roadies in Orange county!

Still making a little time for proper recovery between the construction and training on the weekends. 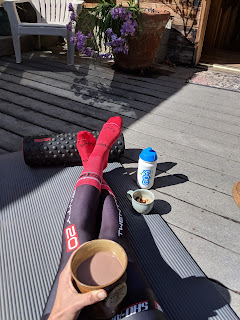 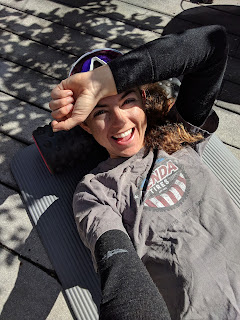 Lots and lots of this... 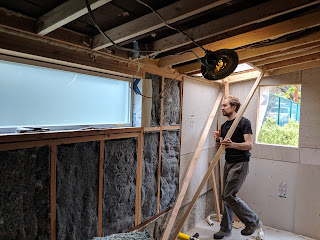 And of course lots of this view. This picture was a day when everyone was super engaged, the kind of day I dream about, when the lesson I planned goes as I expected, and every kid is into it, doing the work, interested in what they are doing, actively trying to get the data collected and graph graphed. 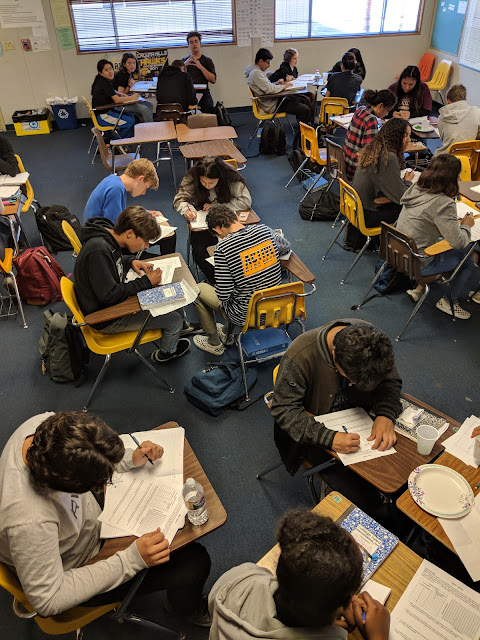 Oh yeah, and I'm trying to be consistent about going to yoga, you know for the balance, core and moving meditation. It's pretty great, and my body feels so happy every time I leave, even if it does make M, W, and F crazy long days. 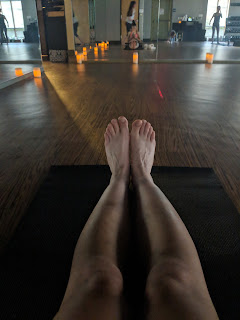 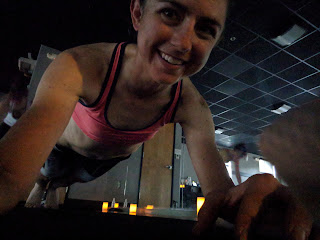 Ok, that's all. Spring break, so soon, then I will be a good kid and get down to business!

True Grit Epic: The Bestest Race I Ever Raced!

This race psyched me out so hard, first race of the season, no epic climb, endlessly technical desert terrain, lots of strong women coming out to kick off the NUE season, and most of all racing 100 miles in March seemed like a ridiculous thing to be doing. Having a wheel break during my pre-ride Friday morning was the best thing that could have happened to me though, because running around trying to figure out where I would get a wheel from took my mind completely off the nerves, distracting me from thinking about how to race bikes (I felt like I had no idea what to do... it was stressful).

I was still pretty psyched out when I woke up Saturday, But as soon as we rolled under the start banner I knew racing True Grit was exactly where I wanted to be. Every minute of the race was a blast, starting with chasing the lead men through the swoopy fire- road and up the gullys between canyons of rock in the first hour of the race.

My strategy was to go out hard, and then panic about being caught for the rest of the race, you know, like I did at every race last year. Again good luck was on my side, as I broke a spoke on the waterfall on lap 1, about 45 minutes into the race, and was pre-occupied with descending cautiously for the rest of the race because I was scared shitless of destroying another rear wheel, so the panic never really set in.

Although it was terribly frustrating to not get to smash rocks and bomb down Zen with reckless abandon the Edict still took care of business helping me fend off the other women and by the end of the techy stuff on lap 1 I was still in the lead. The second half of the lap had a long, peadable descent followed by an even longer false flat, smooth climb in the Bearclaw Poppy area. I had to shift my strategy from gaining time on the descents to throwing around watts on the long shallow climb, which seemed like a risky approach considering I knew how strong a climber Chase is, and had no idea where the strengths of the other women layed.
I got lucky enough to catch up to some dudes, including a single speeder who knew where Silverado is (!) so I had company for the long back side of the course, and continued to pick off more of the pro men on the last two techy bits of the first lap which was super motivating.

Heading into the second lap I was surprised my mind and body felt so good, and I listened to the dudes trying to stick to my wheel complain about their hands hurting with a smirk on my face.

Knowing I may blow up later in the second lap I tried hard to pace myself on the way out to Zen the second time, and before I knew it I was at the top of the waterfall, through the feed zone and again climbing the gloriously rocky zig zag ascent on Zen. And then I was at the feed zone again, and then climbing the fire road to Bear Claw Poppy (which obviously made me want to eat bear claws EVERY TIME!). The second time through the long gradual Stucki climb I pushed harder, trying to gradually empty my tank, motivated by all the 50 milers on the course whom I would target, sneak up on and pass one by one. I had no idea how much of a lead I had on 2nd place, so I rode like she was just seconds behind me, surprised I still had watts to give and limited discomfort in my body.

Somehow the 88 miles (yeah, they say 100 but it's only like 88) flew by, and before I could get sick of riding my bike I was cresting the top of Barrel Roll and headed back in the direction of the finish! yeah, my hands and arms hurt (this is why friends don't let friends skip arm day), but I really never felt that sense of despair and dread I usually feel in ultra races when you realize you have ___ miles left. The very end of the race was made humorous when Dirtwire.tv's Thom parsons caught me running up a rock problem (hey, it was late in the race! My legs weren't fresh anymore!) and then he chased me first on foot and then by bike down Barrell Roll. It was comical how slow I was riding to try and preserve my bike, but also thinking any minute 2nd place would catch me, but we chatted about ice cream and passed about 65 armatures doing the 50 mile race, all the while screaming 'Hello, it's me, I was wondering if after all these years you'd like to meet'. Then Thom told me about the Lobster guards in New England, and almost killed Kimmi Runner (sorry Kimmi!), yeah, good times.

No joke, in all honesty every damn minute of that race was a blast. All the way until I crossed the finish line and was told there was no ice cream at the venue (the idea of ice cream got me through the last 15 miles damn it!).  I was able to descend just fast enough, and climb just hard enough to keep 2nd place out of sight/mind, and I focused on hunting down the pro men one by one like a lioness hunting wounded deer, until I was in the top 10. From the ripping start following, and sketching out the Pro men, to throwing around watts climbing Stuccki Springs, to singing Adele to the armatures I passed, the whole thing went by so fast I didn't even have time to feel like I wanted to quit bikes!  Despite not getting to let 'er loose and smash rocks with reckless abandon though I loved it, every mile, rock, stupid hard climb and flowy ripping descent, Hands down the most fun race I've ever done.