Making Lemonade out of Lemons 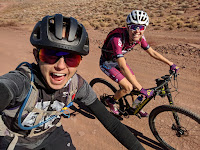 This past weekend Nikki Peterson and I were able to sneak away to St George for a few days to pre-ride the True Grit NUE course and have a little girls weekend in the desert. I looked forward to this trip for weeks, to the idea of riding my brains out on crazy fun, technical, rocky trails, drinking afternoon coffee sitting next to the van looking out at gorgeous views of red rocks, yoga in the warm sun, and maybe even sneaking in some reading.
Sadly both Nikki and I came down with the flu a week before we planned to leave, and even though we were both still coughing and blowing our noses, it was the only 3 day weekend I had to make the trek out to Utah before the race. We decided to still go, but focus on taking it easy/getting a lot of sleep all weekend. Although the weekend didn't go exactly how I envisioned, I'm pretty pumped to report that I did in fact take it easy (despite having so much time I COULD ride, if you know me at all, you know this is a big deal) and that I came home healthier than when we left! I'm oddly proud right now that I used so much self control, although it was very very very hard, and didn't ride myself into the ground.

Some highlights of the trip included: 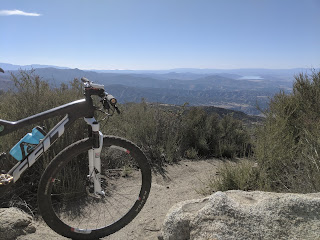 Getting to sneak in a 3 hour shred in Idylwild before picking up Nikki on Friday. If you live in SoCal the trails in Idylwild are totally worth the drive, plus there is a seemingly endless amount of riding there. On my ride I accidentally found the jump trail, got lost at least 3 times, saw approximately 0 other people (until I got back to the van) and was blown away yet again by how much fun the Edict is.


Friday night we slept in a Walmart parking lot in Mesquite, NV, you know because we are classy like that. One of my favorite aspects of #vanlife is being able to pull over and go to sleep on a whim, and since we were prioritizing sleep, Mesquite is where that happened! The cherry on top was being able to run in and grab almond milk in the morning for our coffee! 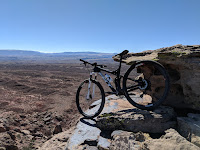 Saturday we got a late start, but still rode the first half of the race course together. There were TONS of other mountain bikers EVERYWHERE, mostly families with young kids which I thought was pretty much the best thing ever!

We stopped to session a lot of technical features, tricky lines and fun descents, so the 30 mile ride took more than 3 hours. When we got back to the van we basically sat right down in the dirt and inhaled peanut butter and jelly sandwiches. 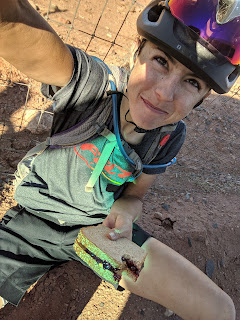 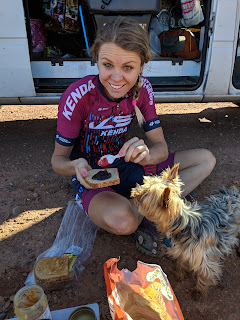 And then, since we didn't start the first ride until 11am, I basically had to jump right back on my bike to sneak in an afternoon ride before sunset. On my second ride of the day I hit the remainder of the course, plus a little extra credit, and flexed the self control muscle by NOT riding ALL THE TRAILS like I wanted to (It was hard, I mean come on, one was called 'suicidal tendencies', how could you NOT want to ride that!?
On my Sat afternoon ride I met the Utah state high school shredder Truman and his dad after we played a little cat and mouse on the last loop of the race course. It was super fun charging down Barrel Roll with Truman hot on my wheel, and then chatting with them after about racing, Leadville and True Grit. The next day Nikki and I got to meet Isabelle, Truman's sister who is a sophomore in high school and is also racing True Grit. I admire these kids so much, to have the drive to do something so challenging as high schoolers, that is pretty freaking cool! AND they are wicked fast XC racers too! 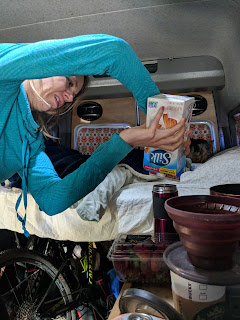 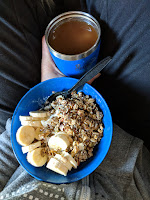 Sunday I got to have a little van life moment drinking Badsea coffee and eating previously frozen Greek yogurt with granola since the van fridge is too efficient and froze all the food we brought. It's the simple things, like good coffee, home made granola and a book in the early morning that make me happiest.

When Nikki woke up she had to 'milk' the frozen Almond mike carton... it was pretty funny, like squeezing milk from almonds.

We threw down another lap of Zen trail on Sunday morning to dial some lines, and then rode some more of the course down the back side of the zen trail area. When we were riding Zen we ran into quite a few cool people, and my suspicion was confirmed that people from Utah are the nicest.
And Sunday afternoon I snuck in another afternoon ride at Gooseberry Mesa, somewhere I've always wanted to ride but never had the chance to before. The trails around the mesa are amazing, so many tricky, sneaky lines with constant power moves to climb seemingly impossible rock faces that have sand paper grip.
There are endlessly awesome views from the mesa as well, so I had to stop like 20 timed to take it in and snap some pictures, especially of all the cliffs. The trails require you to follow white dots as most of the route is across, over, up and through huge rock slabs, and it was pretty cool how my bran figured out about an hour in that everywhere the white dots let was ride-able. I would look ahead, think 'no freaking way', try it and be surprised every time that my tires gripped the rock enough to make it work. Such a cool feeling, and another trail network I highly recommend riding if you are in Southern Utah.

And I may have gotten a bit carried away, tried to ride more than was possible given the number of hours of daylight, and had to hitch hike to town. I'm proud to say that I didn't push it past what was healthy though, getting in that car and admitting defeat was hard :) Thanks to the nice people who drove my bike and I to Hurricane to meet Nikki.

And instead of riding until my legs fell off I opted for hot chocolate with Nikki, a winter (errr, any time of year) bike trip requirement.

We woke up to snow on Monday morning, like flurries outside the van window, so after some hemming and hawing by me (since I was DYING to ride one more time in St George) we choose to be smart and start the drive home early.

I've been really lucky in the past four years of bike race related travel. Yeah, I've had a bike not show up in Brazil for a race, and I'e gotten sick on the road, but these little hiccups just make me more grateful for all the times everything has gone right, and I've gotten to ride to my heart's content. Stoked we still got to sneak away, ride some great trails, and focus on resting/getting healthy for the season to come. And super grateful for Nikki, who put up with my constant need/drive to ride more bikes, but who also helped keep me focused on rest and taking care of my body. We made the best out of what we had, and that was some pretty sweet lemonade!