There isn't much more inspiring in my book than watching a 13 year old turn himself inside out to climb a mountain as fast as he possibly can. Or to ride alongside a group of six 13-15 year olds as they absolutely gut themselves in a team time trial, leaving every drop of energy they have out on a mock race course. And most of all, to have a 12 year old girl ask if she can ride extra with you after she has already ridden 60 miles and has 15 more to go to get back to the hotel. I often find that when I show up to help out, mentor, or coach kids teams I end up feeling like I benefit from the situation more than the kids, and this weekend was no exception!
It's become a little tradition (only 2 years running so far) for me to head to Santa Maria on MLK weekend to ride with the juniors of Team VeloSport at their team camp, and this weekend I was incredibly inspired by the work ethic, dedication and awesome attitudes of all the rad kids on this award winning development team. 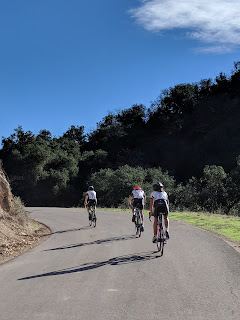 This year I believe there were 55 kids from the team in attendance at camp, ranging in ages from 8 - 18 plus a huge group of super cool parents/mentors. For the kids, the weekend consisted of an individual time trail Saturday followed by skills drills in a park and seminars in the evening, and a TTT Sunday followed by a stout ride up and over Tepusquet mtn.


Highlights from the weekend included:

-Rolling through Santa Maria out to the ITT and TTT with a MASSIVE group of super fun, enthusiastic juniors 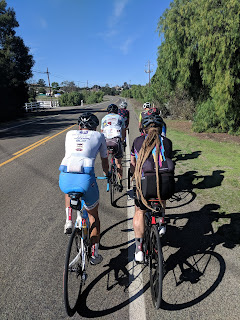 -An 'em' paced adult ride to Avila Beach on Saturday afternoon that turned into a very NOT em paced suffer fest in which we may have ended up dropping some riders, talking about stopping for coffee/ice cream and never actually doing it, checking out the butterflies in Grover Beach, and HAMMERING the final stretch to Santa Maria (I'm not really sure why, but heck, it hurt so good). Also I'm pretty sure I reinforced my reputation as a terrible ride leader for not only accidentally lying about the pace, but under-estimating the length of the ride... 100 miles later... oops.


- Discovering the most amazing Mexican grocery store ever and  spending half an hour there Saturday night talking on the phone with Brendan while nomming on delicious cookies :)

- Getting to mentor a co-ed TTT team of crushers who did such a great job of putting it all out there in their team time trial. They worked so hard there was almost a crash near the end because the kids were going cross eyed. Not many people are able to push themselves that hard, let alone 13-15 year olds!
- Riding with the 'intermediates' (juniors anywhere from 12-16 years old) up Tepusquet mtn, then down the backside, which ended up being one of the most amazing roads I've even ridden down, think perfectly banked turns, amazing views and butter smooth pavement. The kids worked SO hard on the way up the front, it was super impressive (esp after they did the TTT that morning!), then the coaches/mentors dropped the hammer on the way up the backside... oops :) 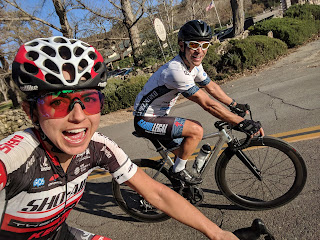 -And another post kid ride, this time just with crusher triathlete Adam Harita, which AGAIN was supposed to be EM paced and ended up being a shred sesh due to limited day light, consisted of 100% amazing scenery/roads (how is it SO dang pretty in the Los Olivos area!?!), included a jaunt on 101 North (apparently I can't get enough hwy 101), and this time DID involve a coffee and pastry stop. The chocolate almond croissant was pretty necessary to get us back to Santa Maria as I once again underestimated the distance and we ended up with 118 miles on the day...oops... again. Rolling into the hotel parking lot after dark to eye rolling was the ridiculous icing on the cake :) Thanks Adam for playing bikes with me until past sunset, that was an AWESOME bonus ride! 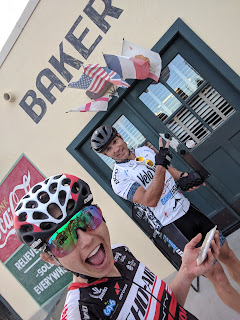 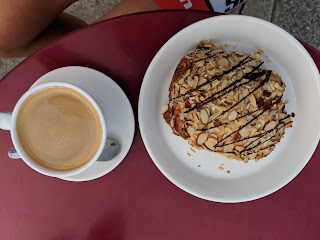 And thanks team Velosport for letting me come play bikes with you guys and gals all weekend! It was an honor to be part of such an incredible organization for the weekend. The coaches, parents, team directors and volunteers who make this team/camp possible for the kids do an outstanding job. One day maybe I'll have a little shredder to race for the Velosport jr development team... I can only hope :)