I wish I had pictures from Thursday night. Pictures to show how cracked I was, how utterly tired and defeated I felt, pictures of the babbling nonsense I uttered to Brendan as he wiped down my chain, lubed it and put my bike in the van. It was probably not a pretty sight. I went to sleep in the van thinking I was done. We had parked basically exactly where Brendan met me at the end of Day 1 with the In-n-out, and I was asleep almost as soon as my head hit the pillow.

Before going to sleep, somehow Brendan talked me into setting an alarm for 5am the next day, in case I woke up and wanted to ride. Miraculously, when the alarm went off I was on my feet throwing on a clean kit, the same leg warmers and Brendan's dry vest as if day 1 had never happened! Somehow I was going through the motions to start day 2 despite being so thoroughly convinced the night before that it was over and I had no desire to pedal anymore.

Soon I was rolling through Atascadero and Santa Margarita, and then into San Luis Obispo. Since the detour took me inland the route now consisted of random side streets and some hwy 101. In the dark early morning hours it was a little sketchy to be dodging tire shreds and glass alongside 65mph traffic, but when the sun came up I didn't mind the hwy riding so much. 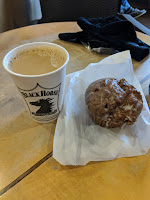 In SLO I had decided to drink a real cup of coffee, since the detour and wind had already made so much of the trip miserable, I figured 'who cares how fast I do it now?' and a 10 minute stop to suck down a small cup and inhale a blueberry lemon muffin seemed like a good idea. Double bonus was the fact that my favorite coffee shop in SLO happened to be on the route and I didn't even need to look at a map, it just appeared like an omen not at all where I thought it would be.
The coffee and snack were possibly the best part of the ride (besides the scenery in Big Sur of course), and once I was rolling again everything was rainbows and butterflies and magic, just like any best day I love my bike kind of bike ride. I felt fantastic all the way to Buelton where Brendan was waiting with snacks, chain lube and water. Much of the route to Buelton was in heavy, wet fog or on Hwy 1, and the bike was starting to get filthy and squeaky. My rear brake wasn't working anymore and Brendan had to do emergency surgery on the front brake to stop it from rubbing. Once I was fed and had chargers/lights ready to go we made a plan to meet in Ventura (where I expected to be at sunset) and I was back on 101 finally headed back to the coast. 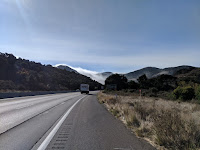 Returning to the coast meant dropping back into the fog, so sadly I didn't get the sweeping views of rugged coastline I was looking forward to as I pushed down hwy 1 towards SB. Fortunately there was only a very very light headwind, so progress was much quicker than the day before and in no time I was in Santa Barbara, basking in the glory of only having 100 miles to go. You know you have a screw loose when you think ONLY 100 miles to go! 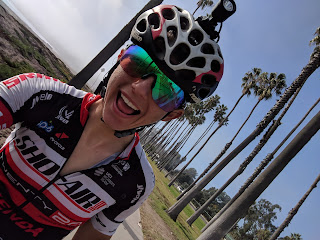 Somehow I still felt good as I rolled along State street and then the palm tree lined bike path on the beach. My knees hurt a little, and I couldn't go fast anymore, but turning the pedals wasn't the worst thing, and again, quitting no longer seemed tempting. Santa Barbara has some great bike paths and lanes, and being in town with things to look at helped a lot, and so did the chocolate mint waffle I snacked on :) 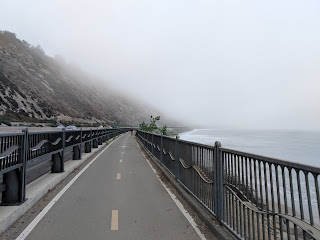 South of SB I hopped on the bike path along the freeway, cruised to Ventura and met up with Brendan one final time, ah hour ahead of what I expected, to devour croissants filled with ham and cheese, and sugar cookies from a tin Brendan's mom gave us (I think on this ride I ate upwards of 50 cookies... they are small, but still). I figured I would get to Point Mugu at dusk and Brendan wanted to shadow me as I rode in the dark from Malibu to Santa Monica, but with the way Hwy 1 works it didn't really work out so well, and Brendan ended up driving to the Pier where I was going to finish to wait.

Of all 478 miles of this trip the traffic and roads felt safe and comfortable until the very last 15 miles. As the light left the sky, with TWO tail lights on my bike, cars on hwy 1 buzzed me over and over, as if they didn't have enough room in their TWO lanes to give me a comfortable berth. It was a little un-nerving and frustrating, but being super super tired has a way of making one not really care about anything in particular, so I kinda just tolerated the rude drivers. 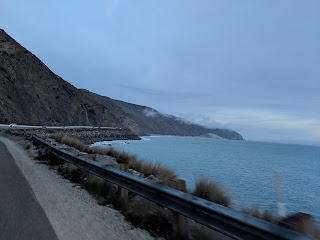 Past Malibu about 8 miles from the finish I started to get emotional and reflect back on the ride. I didn't really want it to end because, then what? 10 miles felt like an eternity as well as the shortest distance ever, and how the hell did I go all this way, so much of which was on freeway, without a flat?! Well, right as I thought that I felt a squishy feeling in my rear tire. At first the timing seemed too coincidental so I figured it was in my head, but a couple seconds later I felt rim on pavement and knew that yes, after all this time, I did indeed have a flat, so close, but so far from the end.
I stopped on the side of the road (under a street light thank God) and proceeded to complete the world's slowest flat change. I'm pretty sure I was sitting on the ground at some point because squatting to access my saddlebag hurt my quads too much.
\
Eventually the tire had a new tube in it, and I was rolling again. Soon I hopped onto the Santa Monica beach bike path, which was pretty spooky in the foggy dark, with absolutely no one in sight. The real mystery of the ride turned up in the last 3 miles, what the hell are all those scooters doing on that bike path with no owners?!? I passed maybe 10 unattended scooters, some in the sand, others standing at attention on the path. I felt like a crazy person, but I'm pretty sure I wasn't hallucinating!

Anyway, I'm going to end this in the least exciting way possible. At mile 229 on day 2 I rolled up to Brendan on the Santa Monica pier and lifted my grimy, filthy Felt F1 over my head in victory (kinda) and disbelief. After so much desire to quit, so much misery, so much doubt and frustration it was kinda unreal to sand there at the end of the longest ride of my life, more than 2 double centuries in a row, alive and finished. It was bizarre. The world moved on around us as Brendan and I gushed for a few minutes about the whole ordeal, and then we were back in the van, eating more cookies and laughing at the hilarious texts from friends that had been pouring in all day (unbeknownst to me as I was riding and not looking at my phone). 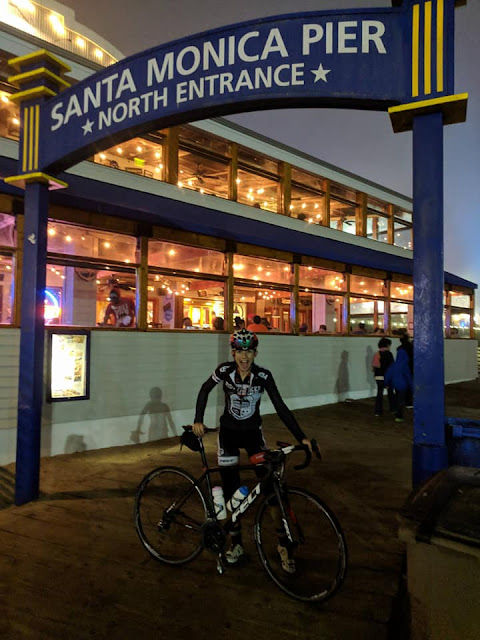 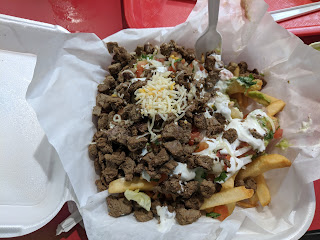 And then we drove to the heart of LA, ate the most amazing steak fries of my life, and inhaled horchata before making the final push to Silverado.

Now I don't know how to end this, and I need to go make dinner. Over the next day or two, while I am at work teaching, or coaching the Laguna kiddos, I know some sort of resolution will come to me, but for now I'm still feeling full and happy, and incredulous. It's done. What next?