The Most Ridiculous Day

Remember that crazy 200 mile ride I did 6 weeks ago, the solo death march from Orange County to Palomar mtn and then up through Temecula to Santiago Peak? The reason I did that ride was because SuperDave, a local legend and employee of 3T made it a goal to ride both Palomar and Santiago peaks in one day back in Sept, and the date of his attempt became sort of a big event in Orange County.

Dec 9 was the date set aside for the ride, and despite concern about the route, a ridiculous backwards version of what I did complete with unreasonable amounts of super rough dirt roads on cross bikes, i threw caution to the wind and jumped on my bike Saturday morning to join the shenanigans.

Dave's ride started from 3T, but I rolled from home to get a few more minutes of sleep and avoid doing my bike commute on a weekend day. I met the crowd at Tucker Wildlife sanctuary in Modjeska canyon and soon the group of about 30 was climbing Harding truck trail towards Santiago peak.
I've done this first climb on a Felt VR before (that's the adventure ready road bike I raced BWR on, remember) so the first climb at least was NBD. Sadly I am a slow learner, and despite Brendan telling me over and over that low tire pressure is better, I had aired up my tires to the upper limit the sidewall info indicated was acceptable, which was much too high for the mtb rims I was riding. My logic was that I would be on the road en route TO Harding, but I never let air out of the tires and 2/3 of the way up Harding my rear tire rolled off the rim. I was super bummed to have to put a tube in my rear tire (although in retrospect there was plenty of Orange Seal in there, I could prob have shot it with C02 and re-seated the tire), and came to grips with the fact that I was going to have to ride super conservative to not pinch flat now.
Not long after we turned onto Main Divide to finish the ascent to Santiago Peak I felt that dreaded squish under me, looked down and realized that I have ANOTHER rear flat. Fortunately the Spandex Stampede guy was there and let me use his tube instead of digging through my saddlebag for the very hard to get second tube I had. I promised I would hit him with a fresh tube at the lunch stop, threw in tube #2 and we were off again. I was super bummed to be the girl getting all the flats, and started wondering if it was a sign I should bail and avoid getting 1,000 more flats and becoming a hassle. 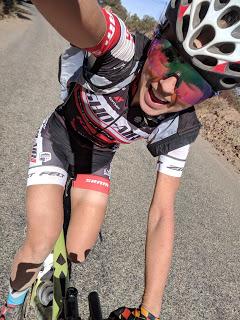 Alone, on MD, loving life.
When I reached the peak the group was taking pictures and what not, but I rolled through without stopping to get a head start, fearing I needed to be crazy conservative to avoid more flats. I spent the next hour-ish alone, expecting to get caught, literally reminding myself out loud NOT to ride fast on every downhill, which was so so so frustrating, I just wanted to bomb down the chunky, rocky roads I know so well. By the time I reached the end of the dirt I still hadn't gotten caught, and started to fear the group was ahead of me, or that they had decided to turn somewhere and take a different route. I didn't have much choice though, but to keep going, and was relieved to meet up with Collin, the SAG vehicle driver at Ortega HWY and hear that no one else had been through.
I sat down and ate some snacks, chatted with Collin, ate more snacks, and waited. I waited so long I was able to patch the flat tube fro earlier (a thorn, not a pinch flat like we thought). After eating MORE snacks I decided to ride the route backwards to find the group. I figured sitting around was a waste of time and it was a beautiful day. About a mile back up the road I ran into the group, who apparently had so many flats they had run out of tubes and C02 and had resorted to patching tubes as more flats occurred. Although I was relieved that i wasn't the only one to get so many flats, the delay set us back more than an hour behind schedule, and over lunch the decision was made to descend Ortega and ride Grand Ave to Temecula, which is ore similar to my previous route than what had been planned. &nbsp.
The following 3 hours were pretty uneventful. The 6 of us who continued towards Palomar took turns pulling at what was to me a pretty hard pace. We Made short work of Grand Ave though, amazing how much faster it was with a group, and soon we were in Temecula headed to Hwy 79. We picked up some fresh meat in Temecula, Richard, who helped out with the pulling as our group was starting to fade. I continued to eat more calories than I was burning, and felt stoked to feel strong, fresh despite the savage pace across Grand and 7,000 ft we had already climbed.
Hwy 79 was sketchy as heck, like expected, but we had the car behind us, alerting other vehicles that we were there, so it was a bit safer than when I rode it alone in the other direction, and we only got 1 middle finger!
By the time we got to the base of our ascent up Palomar it was 3pm, and half the group was cracked. I ate some more un-necessary snacks and then Eno, Sean and I promptly rode away from the others up the steep, sandy climb. I knew how heinous the next 2 hours would be, so I settled into my own pace and was suprised overall that the whole thing was much less terrible than I imagined climbing it would be the two times I had descended it. The wind had stripped much of the sand off the fire road, and at a moderate pace it was hard, but not the worst thing ever, until the last mile! On the way up we were treated to an amazing sunset over the desert, and we reached the top as a bright pink/orange blaze lit the western horizon through the pine trees that crown Palomar. 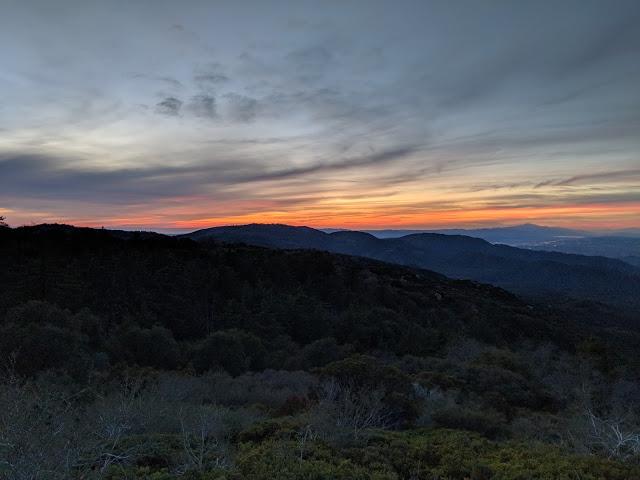 In the last mile Sean fell apart and ended up walking, but Richard caught up and joined Eno and I for the short traverse to the pavement. Our little group kept moving as it was getting colder and colder, and the sun had completely set before we got off the dirt. Since I was familiar with the route we had no trouble navigating turns and what not, and we figured the others would see our deep, narrow tire tracks (and honestly I thought these hooligans would have a map of some sort, since, you know, I didn't commit to doing this ride until the night before!), so we didn't wait at intersections. The three of us arrived at Mother's Kitchen, a little restaurant at the false summit of Palomar at 5:30ish, and were so so glad to be welcomed inside by locals setting up for their holiday party. We sat and chatted and waited and waited and waited. We discussed descending to tacos at the base of the mountain, but kept deciding to wait just a bit longer for the rest of our group. At one point Richard drove off with a nice mountain woman who offered to take him to her house where there is cell service so he could phone his wife, and we figured he was getting kidnapped and wasn't coming back.
Eventually, after what felt like an hour, Dave and Dan showed up, and then the question was, where is Sean? Sean from Michigan who didn't have a light nor winter clothes nor a map... Sean had been between our two groups so his absence definitely meant he took a wrong turn. This development meant we had to send out a search party, which meant loading the group in cars and the thought of finishing the ride basically died at that point. At this point in the evening, with nice mountain lady off with Richard, the other local folk turned on us and kicked us out of their 'private event' forcing us to go stand outside in the cold. It was also getting more and more frigid by the minute, Palomar is above 5,000ft, so like almost real elevation, and none of us were dressed appropriately. As we struggled to load bikes and people on the two cars we had to go find him, miracle of all miracle, Sean rolled in! Somehow he had found his way to Mothers by using his cell phone flash light and dumb luck for direction. And then, another Christmas miracle, Richard returned, not kidnapped after all!
No one had any interest in continuing to ride at this point, and despite being very bummed to have climbed so far and to not get to descend, I reluctantly agreed to drive back as well since riding in the cold and dark alone didn't seem too fun or safe. In the end though, I'm pretty pumped on that decision as the car was warm, and the dudes I had been riding with turned out to know all the guys I raced with in college, so we had a solid reminiscing sesh on the 1.5 hour drive back to Orange County.
Overall I only got 105 miles and 13,000ft elevation gain, but it was a fun and ridiculous and eventful day doing things a bit different than my usual hammer all the time, no stopping, solo pace. Not sure I want to do too many more big ridiculous group rides, but there is a second attempt planned for March... and I don't know if I can turn down a bad idea ride :) But maybe I'll just go do it alone instead, just to prove the thing is possible in both directions!