The path to a happy life is paved with good friends, endless adventure, challenges, lots of coffee and tacos. At least for me it is. I've lost track of how many best weekends in a row I've had this fall, which is a very good thing following a best summer ever.

This weekend's edition of adventure and pain centered around the Carmichael Training System Figueroa Mountain Gran Fondo, a 97 mile ride with a very challenging 10 mile KOM/QOM mountain climb in the first 20 miles.
As my school observed Veteran's day on Friday Nikki, her bf Nic and I were able to leave town Friday afternoon and kick off the weekend with the most perfect recovery paced spin along the ocean in Ventura. Then we sat in ALL THE TRAFFIC heading into Santa Barbara en route to dinner with friends in Solvang.

Saturday morning we were up early, downed coffee and oats, and rolled out to the ride in a chilly central coast morning fog. 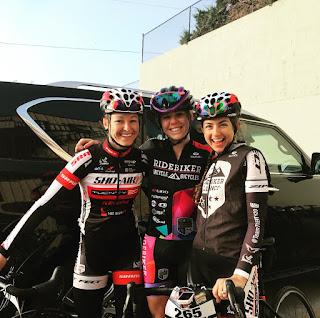 The CTS office in Santa Ynez (where the fondo began and ended) always feels like home as everyone there treats you like family, and it was fun to run around saying hi to all the familiar faces before we headed to the start line. I think this is one of my favorite things about CTS as a coaching company, I feel like part of a big happy team, everyone cares about each other, coaches and athletes, it's pretty special.

All 600 of us riders rolled out of Santa Ynez at 8am, heading east towards Figueroa. The 'neutral' start meant us competitive types got a chance to chat with each other on the way to the impending suffering. I got to catch up with Alison Tetric, miss Gravel Queen herself, as well as a bunch of dudes who I don't remember their names (hahaha, sorry dudes, you all look alike in your kits and stuff!)

Around mile 10 we rode over some timing mats and the 'race' was on. I had never ascended Fig before so the whole climb was a mystery, one of those daunting challenges which you hear so much about, and build up a respect/fear of until the day comes that you get to see it for yourself. Menso came along for the adventure with the plan of riding with me all day rather than trying for the KOM himself. spending part of the week on the couch after our Tribute ride last week left him exactly fast enough to stay with me (well probably faster, but yeah), and to warn me a few times that we were going way too hard in the first 15 minutes based on his power numbers. I however was feeling invencible, and had a hard time reigning it in even after I was told by several dudes that it was an hour + long climb.

Few people realize that Santa Barbara county has real mountains, and Fig is the most westerly and smallest of the peaks that are accessible by cross or mountain bike from the beautiful, sleepy town. The route we took ascended for 3 miles, took us across some dirt and through three creek crossings and then shot us straight up the mountain side, to about 4,500ft in the remaining 5ish miles. The road wound around and through the mountainside, offering sweeping views to the left/west. but I saw none of it as I was solely focused on holding Menso's wheel/leaving every piece of my heart on the climb. As Menso put it, I wanted to be bleeding out my eyeballs from going so hard at the end. For most of the climb I could see Alison working hard to stay with us, about 30 seconds back. This obvi triggered my 'panic stricken' mode of racing, where I freaked out inside, talked myself out of getting to the top first and internally accepted loosing the QOM, all while continuing to gut myself to stay with the boys. Eventually Alison started to fade, and the gap got just big enough for me to relax a bit about 3km from the top, thank God because I thought I was going to puke from 10km to go all the way to the summit. 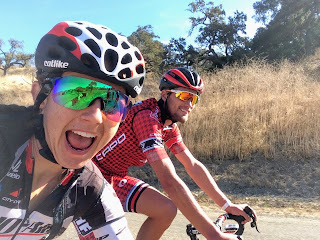 At the top I breathed a sigh of relief and rolled on towards the descent, not stopping for cookies or snacks at the aid station. We had been riding for about 2 hours but I couldn't stomach the idea of eating because I felt so sick from climbing, and maybe eating too much oatmeal before the ride. I was told that the only segment that mattered as a 'race' was the QOM, so I took my time descending, snapping a few pictures, and finally took in the incredible views of rolling central coast hills and ocean. It reminded me a lot of the views from King Ridge Road in Sonoma County, one of my favorite places in the world.

At the bottom of the descent Menso waited for me, and then we ran into my coach as we rolled into the teeny tiny wine tasting town of Los Olivos. I was told there were pastries at the rest stop, and although I didn't really want to stop, my calves were sore, and I knew I NEEDED food (even though I still didn't WANT any). Sadly we had mistaken 'pace groups' for pastries, a very very disappointing reality.

So we decided to wait until the next group was planning to roll out in order to have other riders to draft off of and work with for the 60 miles that remained of the day. Our group was decently large, about 15 guys and me, and eventually Menso got everyone to rotate and work together rather than attack the front over and over. I was already pretty shelled by the climb and the yo-yoing of the group, but because I didn't think the overall mattered I vacillated between doing work (rotating in the paceline with the guys), and sitting on the back recovering. 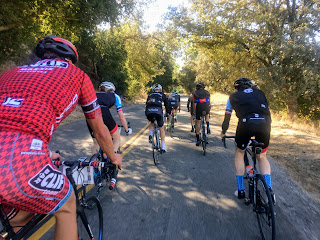 The cool thing about gran fondos is that average, non-racing cyclists get to ride alongside professionals, and I think that's part of why they are so popular in the US. It also means that you aren't necessarily always riding with people who a) know who you are, and b) know how to ride in a group. The consequence of a) was that a guy said something to the effect of 'nice work sweetie' to me, which I found very offensive, and b) I was destroying myself every time I went to the front because the goober who pulled off before me wouldn't fricken' slow down and drop back. So this situation made for an interesting 30 miles of flying through country roads under giant old oak trees and through beautiful vineyards.

At some point we picked up Alison who had passed us when we were all stopped looking for pastries. I was stoked because I had hoped to Fondo with her, but was mildly offended when she claimed she 'wasn't trying to get the QOM' on Fig... suuuurrrreeee. Anyway, that's just how us cyclists are, we can't always play our cards, ego and stuff gets in the way and you have to pretend you were sick, or on a recovery day, or had a loose cassette, haha. 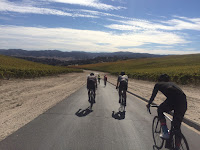 So all these randos, Alison, Menso and me rolled on and on, and at mile 65 a short, steep climb started which had all the dudes and Alison out of the saddle sprinting full boar up the hill. I didn't really understand what was going on, as I thought it wasn't a race anymore, and after a minute or two of thinking everyone would regroup I realized that I was going to get dropped by the group, and decided to try and stay with them. Sadly, it was too little too late, as I was never able to close the 20 second gap they all got on me and the back end of the group, and I rolled over the top both shell shocked and weary from having to try and close a gap I was dumb enough to let form. After that I just decided to keep my HR in check and finish the fondo at my own speed, not trying to stay with any yahoos or anything. I rode alone for a while until an aid station reunited me with the dudes I would finish the day with. At said aid station I forced down 1 pretzel and half a coke, and grabbed a bunch of gels for 'later' (but I was too dumb to actually eat them). 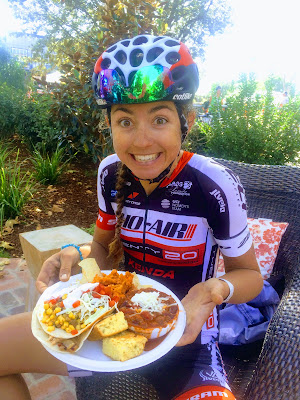 We rode and talked and climbed to the finish, in what I would call the most perfect Fondo pace ever. I took pictures, and looked around, and enjoyed the sensations of the warm sun on my back and sting in my legs as I climbed the final hills.

At the finish we made a bee line for the lunch, and devoured as much chili, tacos and corn bread as my stomach would allow. Apparently Menso burned north of 6,000 calories on the day, and my Strava said I knocked out 4,200, or about 20 tacos, haha :) The rest of the day was like a party, talking to other CTS athletes, some non-coached yahoos (Nic...) and coaches. There was indeed a podium, and I learned at the podium that there was an overall award after all (guess I shouldn't have started Fondo-ing) but I was happy to claim the QOM and two beers for my efforts. 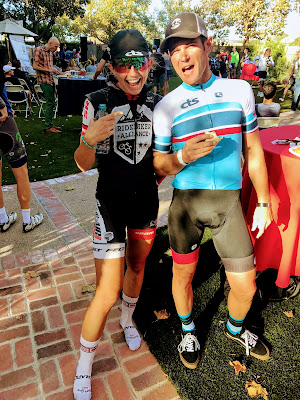 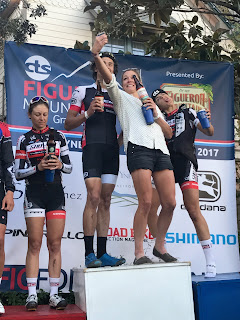 Overall it was an outstanding day. I can't say enough good things about my coach, CTS, and the Fig Fondo, all of which embodied the best of SoCal cycling to me. I am lucky, proud, stoked, and humbled to be part of this organization. I even got to meet Olympian and multi time Giro Rosa winner Mara Abbot after the ride, how freaking cool is that!?

This was the last 'event' I had on the calendar for 2017. Wouldn't have wanted such a fun filled, intense, long, challenging season to end in any other way. Thanks friends, for making it the best day full of laughs, and CTS for making me the athlete I am.


We rounded out the weekend with nonstop food, bikes and fun, Sat. night I ate the most amazing tacos and churros with Menso and his wife, followed by two intense games of Settlers of Catan (in which Menso did not win). 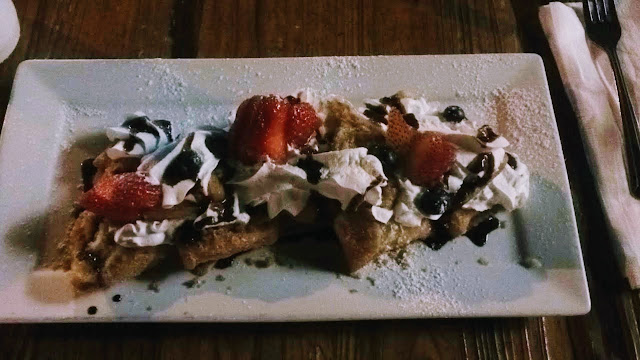 And Sunday some local pro-fondoers, gave me a road bike tour of fancy places which blew my mind, and in which I popped my first 'successful' road bike wheelie (haha, it lasted one pedal stroke... I got my wheel 2 inches off the ground). We followed that up with a coffee ride with Menso and Jacquline on the tandem + Nikki and Nic which resulted in more laugh-till-I-can't-pedal moments, and somehow more hunger than when the day stared. A final stop at a line-out-the-door Mexican place for MORE amazing tacos in SB, and Ancho Chili Mocahs in Ventura on the road capped off what surely was the best weekend of fall for me. I'm ready to do some hard core resting, and the memories made this year will keep me going until it's time to start training for sure. 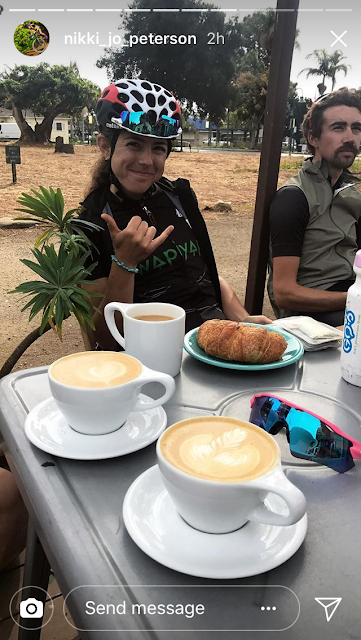