That Time We Failed

Laying in bed on Friday night, trying to fall asleep at 8:30pm but failing due to nerves I realized something: I'm addicted to that nervous feeling you get the night before a big race, when you don't know if you can do it, if your body can handle it. And when there is no big race, I get this feeling by planning bigger and bigger weekend rides, rides that I'm not sure my body can handle. I have joked a few times since school started and the race season began winding down that my ceiling has been raised this summer, as in the amount of riding I can do in one day, and the number of hours or miles it takes to wear me out is much higher than it used to be. So lately I've been searching for that bike ride high that comes from biting off something bigger than I can chew, and conquering it. Kinda like racing, but with no competitors, just my mind verses my body.

This weekend's epic ride definitely falls under the category of 'bigger than anything I've done before'. Our plan was to ride from Carl's house to the summit of Palomar Mtn, down the backside to Temecula, then to Corona where we would climb Indian Truck Trail to Santiago Peak, and then loop it back to Carl's. The planned route had about 200 miles and 17,000ft ascent. We borrowed VR2's from Felt to handle the road/fire road combo, and also for the comfort of tall headtubes, compliance to bumps and disc brakes.

Before I recap the ride I need to note that Carl is a freaking beast. Most people know this, but it's seriously impressive that he was even willing to try this ride with me. Carl does not race, does not have a coach and certainly does not train like I do, so the fact that he keeps up with me on most our adventure rides is freaking rad. I am stoked/lucky to have someone in SoCal as nutty as me to do these crazy rides with every weekend. Also Carl takes awesome pictures, almost all the pics below are courtesy of Carl's phone. 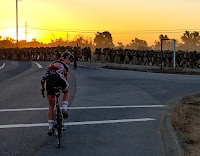 We started at 5:30 in Dana Point, and cruised along the moonlit ocean on Hwy 1 to Camp Penalton. It was already warm, and we both wore just a jersey and shorts despite the early start. In the military base we watched a beautiful sunrise and hit a 'Camp Penalton traffic jam' pictured to the right. We made it to Oceanside just after sunrise, and headed east on the bike path that parallels Hwy 76.

The ride out to Palomar was pretty uneventful, winding through beautiful northern San Diego county roads lined with avocado and pomegranate trees drooping under the weight of ripe fruit. I let Carl draft because we both knew my fitness was better after a season of endurance racing, and sooner than I expected we were at the taco shop at the base of Palomar. It helped that my Garmin was on 'battery saver' mode which means the screen was black all day, as in I have no idea how long it took to get there because I refused to look at it.

After a quick water bottle refill we started climbing. Here I left Carl to ride at his own pace and I soaked in the scenery which is pretty gratifying on Palomar since you are rewarded with better and better views as you ascend.

At the top we stopped for cokes and to eat the PB&J we had in our pockets. Here I looked at my Garmin for the first time, mile 85, 6,000ish feet of climbing. It was about 11:15am when we got to the Palomar General Store, and we had another 1,000ish feet to climb before we could descend the back side. We were mostly on time, but didn't know much about the dirt descent coming up.

After lunch we rode out to the observatory on Palomar mountain, and found our dirt road that would deliver us to the desert. The dirt was MUCH sandier than we expected, and after MORE climbing, in sand, we finally started to go down hill maybe an hour after leaving our lunch spot. This, and the fact that we had to check the map a lot, set us back a fair amount time wise. The views of the desert were phenomenal though, and we had to stop at one point for a picture. It's pretty rad descending from 6,000ft to the desert in one shot.

Unfortunately for us this weekend had some unseasonably high temps (well Saturday did at least), so the desert at the bottom of the mountain was pretty warm. My Garmin read 100 degrees for 2 hours of our time in the desert. I pulled us to Temecula as Carl slowly started to unravel. Every pitch on Hwy 79 caused him to fall off my wheel. After fixing the only flat tire of the day in the heat of the full sun 10 miles outside of Temecula, me running out of water and a little more trying to be a good draft we rolled into town and found a gas station for water re-fills and snacks. I think we were at mile 119 at this point and I realized all I'd eaten was 2 gels, a sandwich, cookie and coke, a package of Clifbloks and a nutbutter filled cliff bar. I went back inside to buy a granola bar and sour gummy worms. The good people of Temecula probably thought we were a bit strange for sitting down on the ground right outside the Quickmart to eat our snacks and inhale bottle after bottle of ice water.


When we started rolling again I calculated the time and distance to ITT and knew things would be dicy. We had to be at the base of Indian Truck Trail by 3:30 at the latest to make the summit of Santiago by sunset. Carl was slowing down more and more, so we finally had the discussion about splitting up. I know that at my own pace I could get to the top of at least ITT by dusk, but my light wasn't fully charged and I would still be riding for 2-3 more hours after getting off the peak. My ego flexed it's muscle a bit and I decided to push on, I felt really good, and I really really wanted to finish the whole ride. Carl was going to regroup and try to make it over Hwy 74 and then coast home.

Before I left Carl asked me what Brendan would say about trying to finish the ride alone. I dismissed the comment thinking Brendan would never think of attempting this ride in the first place, but as I got closer to ITT I started thinking more about the situation. It would be dark by the time I got to the summit, that much was pretty certain. Even if I made it to Santiago Peak at sunset I would have to descend Main Divide and Harding Truck Trail in darkness. My light had about 30 minutes of power, and then I would be alone, in the wilderness, with mountain lions and sharp rocks, without a light. I was on a glorified road bike, about to descend fire roads with very sharp rocks, which means the chances of getting a flat were pretty high. I would need to SEE to be safe, and I had no suspension as back up for hitting a rock wrong. I wanted so badly to just go for it, but the idea that something terrible happen, leaving me with no cell reception alone, started to outweigh the ego wanting to conquer the ride. I thought about how terrible it would be for Brendan to learn that I died on Harding truck trail while he is in Italy, and even worse, in a preventable situation.

So when I got to I-15, ALMOST to ITT, I pulled the plug, turned around, and rode back towards Hwy 74, sad, frustrated, but knowing in my gut it was the right decision. I climbed El Cariso fire road to get off the street for a while, since the cars were starting to annoy me, and then descended Ortega Hwy with a heavy heart wishing I was on ITT instead.

By the time I got to San Juan Capistrano I was happy though. On Ortega hwy, as I wound down to Orange County through a gorgeous canyon, I had realized that the ultimate goal of any weekend ride is to have fun, ride bikes and see pretty places. On all accounts Carl and I did exactly that. We rode a new route, conquered one heck of a ride despite not finishing the planned loop, saw some stunning scenery and we both ended up getting a good serving of suffering. And most importantly I think for the first time ever, I didn't let my ego get in the way of my well being, and I made a good decision that I can be proud of.

But that doesn't mean this route wont be haunting me, until one day we come back for it :)