It was still so cold out at 6:30am that I could see the breath of every rider around me as 1,400 of us rolled across the line on Saturday at the start of the Leadville trail 100. One of the things I like most about these ultra endurance races is that the start is always so early in the morning that my brain doesn't have time to process that it is a new day until I am 10 miles into the race. You wake up at 4, eat oatmeal with peanut butter and a banana, kit up, and roll to the line in a haze, and before you know it 10% of the race is behind you! The morning of Leadville was blissfully the same, a daze of sleepiness that drowned out nerves and anxiety.

The start was FAST though, and the cold woke me up, as did the small talk from two SoCal friends, Robert Freeman and Brian Gordon, who found me just before the start of the first climb. As we ascended St Kevin's it became apparent that maybe we would be the same pace all day (even though Robert had NO idea what he was doing and Brian destroyed me at Tahoe Trail 100k). At the top of Kevin's we were still together, and Robert was a saint to wait for me when I got gap-ed off the small group that formed descending the pavement as I struggled to eat a Clif Shot and aero tuck at the same time.
By the base of the second climb a gap had formed between the top 20ish men and my group, and I led the guys up Sugarloaf working hard to pace myself for the long day ahead. The start had been so fast and exciting that I was worried I had gone out too hard on the Kevin's climb. I had assumed the lead of the race early on in the first climb, but a sense of panic that it was just a matter of time before another woman caught and passed me, a panic that I wouldn't shake for the next 7 hours, set in as soon as I was in the lead. As we climbed Sugarloaf I repeated the words from an email that 3 time Olympic gold medalist Kristen Armstrong sent me friday (!!!), to race my own race, and control the controllables.
The descent after the second climb is well known for being the place where people crash and hurt themselves, but when we got there I was stoked out of my mind to be bombing down the rocky/rutted fire road. My Edict effortlessly floats over the rough stuff and I was giggling with joy as we tore down Powerline. I also may have been screaming with glee... a dude said he wanted to ride with me because I reminded him that mountain bike racing is fun :)

At the bottom Brian, Robert and I were still together with one or two other dudes, and once again, Robert was a hero to come back for me twice when the group rode away from me on the long flat road leading to the first aid station. I was freaked about being by myself on the road (everyone warned me to NOT be alone there) but also trying to pace myself because even the lowest parts of the course are at extreme elevation.


Soon we were at the first aid station, and then tearing down the only singletrack portion of the course, where Brian aired it out on anything that even slightly resembled a jump.

The boys stopped at the bottom of Columbine, the longest sustained climb of the race, and I took a bottle from Taryn, who is pretty much the best friend ever to hang out at an aid station all day just to hand me two bottles.

Columbine is about 3,000ft of consistent climbing, topping out around 12,500ft. I fell in love with it on Tuesday the week before the race and kept that positive association with the typically dreaded climb in my mind the whole way up. I also counted the feet I had left to go on my Garmin... I know it sounds lame, but I LOVE the idea that every few seconds you have a few feet less to go up, and if you just keep turning pedals the elevation ticks by and then you are suddenly at the top!
And that's how it went. At some point Robert caught back up, rode with me for a while, and then decided he was going to go for broke and rode away. It was hard to watch him go, but I was being as patient as possible with the pacing, and knowing how hard the top of the climb was meant saving something for the last 4 miles. I felt good the whole way up, and at the top the helicopter hovering over the mountain made me feel so cool... leading the 'race across the sky'. I kept my mind in check though, it's a long race and anything can happen.

On my way back down, pretty close to the top I saw basically all the women I was racing against all together and the panic resurfaced because they were closer than I wanted them to be. I turned the descending back up to 11 because I knew this was where I would gain time on my competition, and the Edict again made my day because I could take even the worst of lines and the bike turned them into rad rowdy fun.

I think the Columbine descent was my favorite part of the race because the entire way down I was passing a stream of people on their way up and it felt like a mountain bike party. I cheered, screamed, hooted and hollered my way down the fire road, thoroughly enjoying the fact that 1,400 people were all out on the same mountain, loving the heck out of the same sport I love. It was glorious. 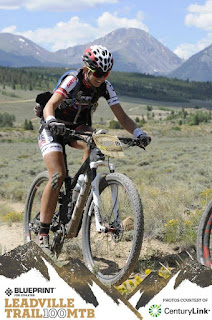 And then it was a matter of catching a few dudes and hanging on like glue as they pushed their way back to the pipeline aid station where Brendan was waiting for me with a feed. At some point I begged two super strong dudes in SRAM kits to not surge and drop me, apologizing profusely for not doing any of the work, and thankfully they were super gracious and agreed to not attack me/leave me for dead.


The hardest part of the race is probably the climb back up Powerline, a crazy steep mile of rutted out fire road at mile 75ish. Again, I focused on turning the pedals over, and divided the climb into little chunks, just make it to that tree, ok now that spectator. Near the top a dude dressed like a piece of pizza gave me a little push (he was pushing the dude ahead of me for a while and I was seething with jealousy!) and then it was just a matter of a few thousand more feet of climbing, two descents and an annoying flat/slightly uphill finish loop.

The last 4 miles contains a seemingly endless, straight, false flat climb on fire road and I started to come unraveled here, watching the Garmin, knowing I had 4 miles left, then 3.9, 3.8.... The last 4 miles took FOREVER. I got passed by 4 dudes, but I just kept thinking about Kristen's email, and telling myself that I could do it. When I was reasonably sure there were no women behind me I settled into a 'just get this done' pace, and finally I turned onto 6th street, crested the last rise and saw the finish line. 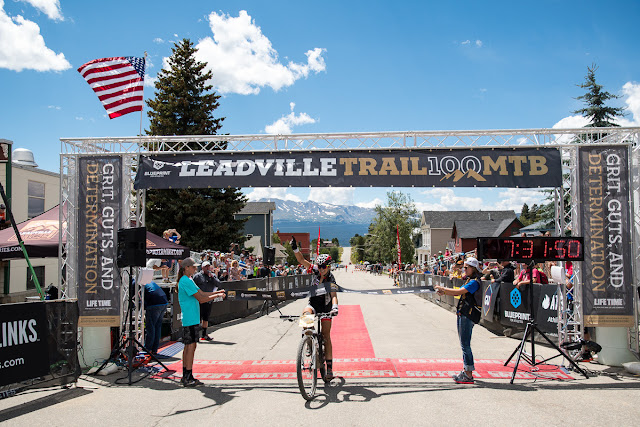 I wanted desperately to wheelie across the line, but when I got there my brain and body were too tired to put together the necessary steps to pull off said wheelie. I also could not have balanced with no hands on the bars for the life of me, haha, but I did drop down to hug my bike as soon as I crossed the line. This bike, I can't get over it.

It's hard to describe the feeling of crossing the finish line as the first woman. This was a goal I set back in March, a race I feared and respected so much that it just never seemed realistic to think I could win. Of course I always wanted to win, but it seemed too big, too important, too far out of the reach of my physical ability. Riding around the course all week, after my mindset shift to positivity I kept thinking about how grateful I am to have so many people supporting me, giving me encouraging messages and emails, and such great sponsors. As I approached the red carpet on the ground, and the tape stretched across the finish line I just kept thinking 'we did it'. This wasn't a thing I did, it was a thing that my whole community did, from Brendan designing the best xc race bike, to Matt coaching me through the shift from XC to endurance, to Nicola always getting me whatever I need to train and race well, Carl riding bikes with me all winter and spring, Erin lending me all her course knowledge and camper amenities, Taryn, Bill, and Brendan feeding me during the race, to all the people who have been there for me, have encouraged me, and who have believed in me.