I realize there hasn't been much in the way of a trip play by play this summer, and at first I wasn't really going to blog much about the whole ordeal. Then Brendan's brother sent the family a photo essay of his trip to Greenland (which I LOVED) and I realized that maybe family members would like to know where we/I've been and to see pictures. I've been taking pictures like nobody's business because I can't get over how pretty it is in CO, so here is a run down of how I got from Orange County to Leadville (part 1), and a photo essay of the trip so far. (Long post warning, this is mostly for my grandma, who I can't call because of no cell reception, and who I want to share these photos with. Love you Nana!!!)

On July 13 I drove from Silverado to Mono Lake, CA en route to Tahoe Trail 100(k). Of course I stopped to soak my legs in Convict Lake, and timed it to have dinner at the Tioga Pass Mobile, where you can get the world's best fish tacos. The Mobile was CRAZY busy (summer tourists coming out of Yosemite) but there was an AWESOME free concert on the back lawn which I stayed to listen to for a while, and an unbelievable sunset across Mono Lake. And then I pulled the van off the hwy still in view of the lake to sleep for the night on a little dirt road/pull out. 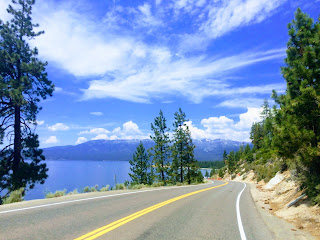 Friday I finished the drive to Tahoe, spun my legs out along the lake (which was stunning) and then somehow lucked into swimming at a private beach (the kiosk boy pretended I was a resident!). I parked the van in condo complex at Northstar where friends from SoCal were staying, a short pedal to the race. Saturday I raced the Tahoe trail 100, and then followed the race up with a nice ride with college friend Marcus who happens to live nearby! 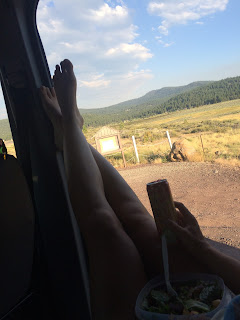 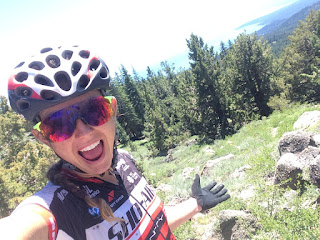 Dinner views from the van in Tahoe and a picture from the top of my post race ride with Marcus with a great view of Lake Tahoe and the surrounding Sierras. 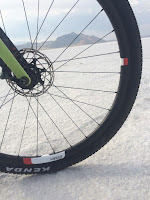 Saturday night I drove to Reno, NV to spend the night with college friend and room mate Amanda. We had a blast catching up, but it was short lived because I had to be on the road Sunday am to drive to Salt Lake City. Along the way I stopped at the Bonneville Salt Flats to spin out my legs. The Salt Flats are where people go to set land speed records, and it was WAY cooler than I expected it to be! It looked like a snow-scape, and I tasted the ground to confirm that it is indeed VERY salty! Ironically I went to the salt flats to ride as slow as possible, as it was a recovery day.


In Salt Lake City I met up with my travel buddy Lauren, and we spent the night with another good friend from college, Taryn and her boy Bill. On Monday Lauren and I met up with the coolest Iranian mountain biker I know, Sina, and I showed them my favorite ride in Park City, Mid mountain trail to Wasatch Crest. The wildflowers were outstanding, and the trails so flowy, fun and fast. After a quick McDonald's ice cream stop, I dropped Lauren off in SLC and rushed to the airport to pick up Brendan's parents, who, by an incredible stroke of good timing, flew into SLC that day to start a road trip with friends. We took a detour through little cottonwood canyon to look at wildflowers, saw my first wild moose, and then had an incredible Irish meal at Flanagan's in Park City where I learned the history of father Flanagan! The evening was complete with a high mountain thunder storm and another awesome sunset. 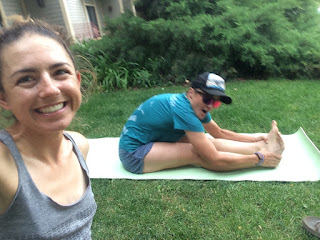 Tuesday Lauren and I hit the road for Colorado. We drove 7 hours to Durango, which took a little longer than expected because of tons of road work (the theme of our time driving together). When we arrived we immediately hit the yoga and stretching in a grassy patch by the river. Then we had a picnic dinner, and walked through the adorable but touristy town. We especially liked the train that runs from Silverton to Durango, complete with guy shoveling coal in the engine!!! Sadly I didn't take pictures of the tiny pull out we camped on Tues night, but we kinda just rolled in, slept and then rolled out. It rained all night though and I kept Lauren up all night with comments like 'I hope we don't roll off this cliff' hahahahah (we weren't actually that close to the cliff...) 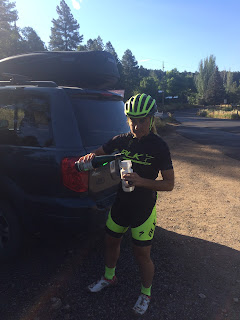 Wednesday we rode out and back on the Colorado trail, where both Lauren and I crashed multiple times because we were having so much fun swooping and dipping and weaving through the rocks and roots, and between aspen trees. Turns out Lauren cracked some ribs in her crash (we didn't know until literally yesterday, 2 weeks later) but we still had a ridiculously good time. Before the ride a super nice lady gave us some water from a wine bottle, making Lauren look like an alchy ;) The people we met everywhere we went were so so nice. We also took 20 minutes at the end to sit in the creek, which I called a river and was promptly corrected by a local that it was in fact WAY too small to be a river (socal perspective haha). 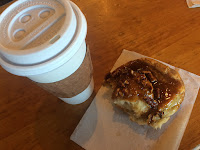 Tuesday night we camped on another dirt road above town, which I also failed to document because it wasn't particularly exciting (although the views driving back to town were amazing!) And Wednesday morning we parked at my favorite Durango Bakery, Bread, for cinnamon rolls and coffee before our rides.
Lauren and I split up for this one because she was sore from the crash and I had to do torture intervals. I followed a route my team mate Levi recommended and post hour of climbing intervals later I looked up to realized I was in the back country, alone, like really out there. At first the rugged back country nature of the trail was thrilling and I was wishing with all my being that Carl could be there to experience it. But then I realized I was ALONE in the BACK COUNTRY where bears most definitely live. At this point it was kinda too late to turn around, so I stayed extra alert, and prayed for no bear sightings, they are nocturnal, right?! Fortunately I was distracted by some incredibly fun, techy features on the trail, like rad dh rock gardens, and steep steep switchbacks with drops hiding around the corner. My bike ate up the tech, and once again I was thinking about how lucky I am to have ridden for years in Socal on steep, rocky trails, which made all this so so so fun. At the bottom of the back country loop I had to walk my bike over quite a few fallen trees and across several muddy water crossings, adding to the back country feel, but making me an hour later back to the car than I told Lauren. As soon as I got within cell reception I called to have her pick me up at the bottom (rather than ride 10 miles back to town) and the final stretch was a glorious, stupid fast, rocky single track descent called Halfin Creek, which had me squealing with delight. I highly recommend riding this trail if anyone reading this ever goes to Durango, it was incredible!
Lauren met me at the golf course at the bottom, and after another picnic lunch of PB&J we hit the road for Telluride.

The drive from Durango to Telluride is without a doubt the most beautiful drive I've ever experienced. We were oooh-ing and ahhhh-ing the whole way. We saw a marmot (my first ever), there was an epic rain storm when Lauren was driving the most sketchy/cliff-y portion of the drive, and we stopped a bunch to take pictures and to check out the town of Silverton (the town most race announcers mistakenly say I'm from). 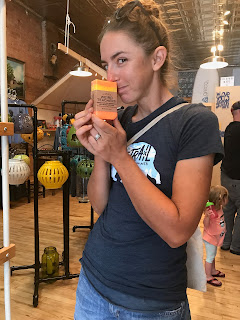 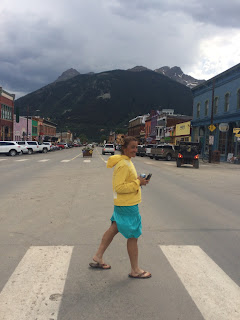 Found some great soap in Silverton, and grabbed a cup of coffee at the cutest ice cream parlor.


And since I already blogged about how amazing Telluride was I think this is a good place to stop for now. Soon I'll recap T-ride to Leadville, complete with 1,000 more pictures.