I'm just going to start by saying this is a race you shouldn't miss if you live in California (or a neighboring state!). The course was so fantastic, the organizers did an amazing job and the post ride meal was incredible. I was told for years that this race is all fire road and I went into it thinking that, but was surprised during the race to find myself on single track most of the day! For a 60 mile race it was a pretty awesome, fun experience, and I think it would be fun for anyone from a super competitive athlete to a beginning endurance racer.

I got super lucky with this race and it's worth thanking some people to start. To Rick Gravely, thanks for giving me your entry (sorry about your arm though!), Erin Machan, thanks for letting me use the bathroom in you condo and everyone from SoCal who was there, thanks for making me feel like a champion, haha :) It was pretty rad to travel so far for a race and feel like I was at home around so many familiar and friendly faces.

Overall I REALLY enjoyed this race, probably because everything went so smoothly, but that means it was pretty uneventful. Nevertheless, here is a quick play by play.

The race started with the organizers pulling the pro women up to the line with a call up and for pictures, and never even mentioned the dudes... that was pretty darn cool and meant that I got to start in the front. We rolled off the start behind the lead truck and began the 1,000ft climb up the ski resort.

It was easy to get swept up in the excitement and ride too hard but a nice man reminded me that everyone was going too hard and to remember about pacing myself, which helped me come back to earth and focus on the numbers/thinking long term. The lead group of 20ish men rode away from me as I dialed it back and I proceeded to spend the next 60 miles mostly alone, occasionally catching and passing a dude, but never really having company for long.

The first climb led us into a rad single track dh full of berms and little jumps, followed by a screaming fast fire road descent. After that, lap one was a blur of single track, beautiful mountain scenery, another crazy fast descent and some steep climbs that were painful until I reminded myself over and over to keep things in check and save something for lap 2.

I got a bit freaked out when I realized after 3 aid stations that there were no neutral bottle feeds (I had been told that there were but didn't do my due diligence to verify this) and being on track with hydration meant drinking both my bottle by hour 2 of a 4.5- 5 hour race. The worry faded to the back of my mind though when I dropped into the last descent of the race, dipping and weaving through sweet North Star single track. I was also stoked to realize that I was 12 minutes ahead of the time I needed to finish lap one to hit my goal time, leaving me with a nice buffer in case lap 2 was slower than lap 1.

Fortunately a super nice lady in the feed zone at the start of lap 2 handed me a bottle when I pleaded for water from the entire crowd of spectator gathered there, and I was on my way back up the mountain, still feeling good.

Lap 2 proceeded without much excitement, just me alone in the woods, loving the crap out of the course, trying to hold consistent power on the climbs and counting down the miles till the amazing single track at the end. I thought about my grandma a lot, but also spent a LOT of time going over the game plan in my mind, of eating, drinking, pacing... It seems sad that I need to concentrate so hard on such simple things, but when you break a race down to the bare basics, it's almost a blissful, mindful consciousness that clouds out mental hurdles like elevation or fatigue and stress. I ate and drank and begged for more bottles at every aid station (and was handed another one, with drink mix even!!). And then on the final climb, when I though the top was 'just around the corner' I started to slow down and feel the effects of racing 60 miles. It was a little hard to keep the motivation up with no one ahead or behind me, but eventually the last climb ended and it was all downhill to the finish.

Crossing the line in first (they even strung up the tape for me) was pretty special after so many races where I've struggled to put the pieces together, and it was even sweeter when I realized I set the course record (for the new Tahoe Trail 100 course that has been used for the last 3 years). 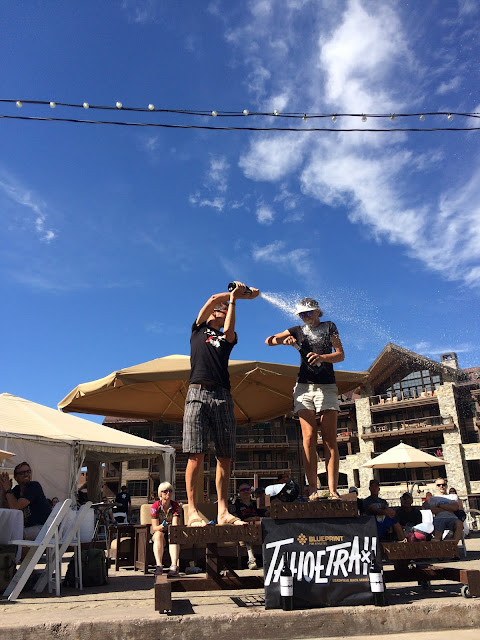 OH AND BEST PART... when I was called to the podium with the male winner, PETER STETINA (!!!!!) he said he knows my sister... PETER STETINA KNOWS MY SISTER?!?! haha, I thought that was really cool. Even cooler was the prosecco war we had on the podium that resulted in 2 empty prosecco bottles, of which not a drop was drank. Yes, I had prosecco in my hair on Sunday morning, and yes I was stoked to finally shower in champagne... the best kind of shower.

This week has been a bit nutty, I'm adjusting to life on the road/trying to fit in seeing all the people/doing all the things and remembering to take it easy so I'm not worn out at the end of this adventure. I wanted to write this blog on Sunday, then Monday... but I guess Tuesday night has to do. More on the trip and plan and making more Erythropoietin  later in the week :)
Posted by Ms Lariss at 8:20 PM