Apparently This is a Thing I Do Now

Lauren Mulwitz is a sneaky little bugger. Either she secretly got in my van two weeks ago plotting to get me to race two high altitude 100 miles races on back to back Saturdays, or she is just really good at helping me forget the trauma of each race in time to sign up for the next one. Either way, when we rolled out of Salt Lake City together on July 17th I had no intention of racing until Leadville. The plan was to drive around CO, ride sweet trails, sleep up high, grow red blood cells and support Lauren in the Breck 100.
Somehow I am finding myself sitting at the Crown in Breck sore and sniffly from racing for 10 hours in the rain on Saturday though. That sneaky Mulwitz, it's like I don't even know what hit me!

Anyway, as you probably guessed by now, on Saturday I raced the Breck 100, another 100 mile race with 13,000ft of climbing, all of which was above 9,500ft. Although the distance and elevation profile are similar, this race was much different than Telluride for a few reasons. First of all I was actually somewhat acclimated, having spent 2 full weeks in CO prior to the race, and I was more rested. However I did wake up in the middle of the night prior to the race with a wicked sore throat, and proceeded to not sleep until my alarm went off at 3:45am (yeah, ultra endurance racing means waking up really stupid early). I convinced myself it was allergies, and rolled to the start with Lauren, anxious about the threat of rain hanging in the sky.

The other difference between Telluride and Breck is that the course in Breckenridge was about 70% single track, very technical single track. After the first climb up Wheeler Pass we dropped into the sweetest steep, rocky trail, and the rest of the day proceeded much in the same way, suffer up a climb, rail an awesome trail back down.

I choose to bring a knife to the gun fight by racing my hardtail, a decision I knew would leave my arms exhausted by the end of the day, but after hearing stories from other racers at the end of the day it sounds like everyone was challenged by the rocky, rooty, technical trails.

The race was three loops, each with about 4,600ft of climbing, and the rain started halfway through lap 1 and continued until I was starting loop 3. For much of loop 2 I couldn't feel my hands, and had to shift with my whole fist, but I decided the hardtail might have been a good decision at that point because it has less moving parts to get destroyed by the sand, mud and rain.

Loop 2 included the dreaded French Gultch climb, a mile long climb up crazy loose shale that is just really hard to clean. Coming into French Gultch I was riding with a single speeder (that guy is WAY crazier than me!) and he asked how I wasn't hypothermic... a good question considering I was only wearing a vest and had my arm warmers pulled down. Loop 2 also included a section of the Colorado Trail Lauren kept calling the 'fun zone' all week. As I turned onto that portion of the course I was stoked about all the 'fun' but then spent an hour climbing a crazy rooty, hard ascent which had me cursing at Lauren by the end. The descent down was pretty epic though, the kind of trail that makes me wish I was wearing my GoPro so I can show Brendan what an amazing trail it was... wildflowers, sweet, smooth, fast, flowy single track, sweeping views, it was heaven!

Loop 3 was just more practice in the mind over matter department of endurance racing. I've found that 100 milers are as much mental as physical. You spend a lot of the day alone, you have to go into the race knowing you will be on the bike for 10ish hours, and the head games at mile 60-80 can be debilitating. I did see a moose on loop 3 though, near the top of Boreas pass the first time, and then really enjoyed the descent down Gold Dust trail to the town of Como. A surprise stretch of flat, ridiculously rocky single track at the bottom did a number on my psyche though. I struggled through the wet, slippery rocks for what felt like an eternity, alone, convinced I had missed a turn and a little frustrated. When I FINALLY turned onto the final climb though a dude caught me and assured me there were no other women around, and I set my mind to climbing the final ascent back to Boreas Pass. 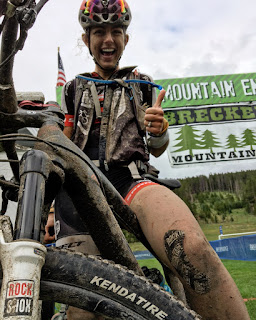 At the pass I learned from the volunteers that I had an hour gap on second place, so I stopped for a minute to eat everything in sight. About 5 granola bars, an almond butter sandwich and 3 energy drinks later I was rolling down Boreas, on the almost all down hill final 8 mile stretch of the race, STOKED and tired. There was one more out of this world good trail before the finish, Aspen Alley, and I very much enjoyed the flowy, purpose built trail through aspens, pushing into the turns with the little strength left in my arms.


I crossed the finish line 10 hours and 10 minutes after I started, exhausted but so happy. My sinuses and throat confirmed the head cold situation, but the previous 10 hours of riding world class trails was pretty worth it :)

This race was another last minute decision, mostly motivated by the idea that the course was harder than Leadville, so it would be great prep. Fortunately I had the best tires for the situation in my Kenda Honey Badgers, and although it was rough, the Felt Nine was actually a pretty great bike for the day. I got a bunch more practice eating as much Cliff product and drowning myself in GQ6, which I think is invaluable since hydration and nutrition play such a huge role in endurance racing. I especially love the range of snacks Cliff has provided me this year, because having variety in such a long race makes a huge difference for me. And of course I am so so grateful to my coach, who has done such a good job preparing me for these epic tests of fortitude and attrition. One of my major motivations for doing this race was to get out of doing intervals on Saturday (the same intervals I failed twice last week, and which made me cry), I am so lucky to have a coach who is flexible but keeps the long term goals in sight for me. And finally thanks a bunch to the volunteers and staff who put on the race. This was one of the raddest races I have even done, despite the rain and cold. I didn't get the chance to thank every volunteer when I was out there, but all that standing around in the rain/great course markings, and awesome snacks made the day that much better.

And I guess, to end this re-cap-y post the way I started, thanks Lauren, for convincing me to race my bike again... I'm stoked I sucked it up and went out there Sat, and even more stoked to have no races this weekend after 4 weekends in a row of some brutal suffering!