Lutsen 99er AKA The longest mudbath of my life AKA the least inspired race recap about a pretty ridiculous, muddy, long, crazy race.

I haven't traveled to a race in a while, and didn't really know what to expect in a mass start, mostly flat 99 mile MTB race in the midwest. The weather, ambiguity about feeds and lack of ability to re-ride left me unable to mentally prepare well, and that contributed to not sleeping at all the night before the Ludsen 99er on Saturday. If I've learned anything from the past 4 years of racing it's that you can only control so many of the variables though, so Saturday morning I focused on doing my best, and not stressing about the negative variables I was taking into the race.


Despite less than ideal preparation, at mile 35 I was cruising along in a group of about 8 dudes, in the top 20 overall, and feeling pretty good. My group formed after the 5 mile, 1,000ft climb up Caribou Trail Rd (the only sustained climb on the course), when the first dirt trail shattered the large lead pack. We weren't in the lead group, but I was happy to land with the group of dudes I was with because I could keep up on the ski trails and was greatly benefiting from the draft on the fireroads.

For the first 40 miles I did a great job eating gels and drinking from my filthy water bottle. I could push hard on the climbs and wasn't having trouble keeping up on the descents. The dudes reassured me that we were on pace for about a 6 hour finish, and I even had time to look around at the scenery a few times.

The 99er course took us through a Network of cross country ski trails and dirt roads. The roads were beautiful, hardpack, surrounded by lush green forest. The ski trails were deceiving cruel though, with watt sucking grass hiding slick wet rocks that could easily take you out if you didn't see one. I concentrated on picking good lines and said a few silent prayers of gratitude every time we turned back onto fire road. I also concentrated on not swearing or talking too much, as I wanted my group mates to let me take advantage of their manly speed and draft-ability. This was hard and strange to me, multiple times I wanted to make inappropriate jokes, but I bit my tongue, I'm learning... :)

Because we decided to interpret the printed race guidelines literally (over the few people who said bottle hand ups weren't allowed) Brendan was on course at miles 29 and 45 to hand me new bottles. The guys in my group either didn't read the guidebook or didn't have family/friends to feed them, so when we came to the rest stop with everyone's drop bags the second time my group all stopped to refill bottles etc... and I kept rolling, figuring they would catch me. This is where I started to feel the effects of riding too hard for the first 3 hours. Although I had been in a big enough group, I hadn't done a good job sitting in, and had to remind myself constantly to calm down and stop going to the front.

Around mile 50 I began to eat the only solid food I had brought with me, a chocolate almond butter filled cliff bar (something I was actually really looking forward to), and after one bite I hit a bump causing the rest of the bar bounced out of my hand on the ground. Rather than stop and pick it up like an intelligent human would, I kept rolling. About 15 miles later I was paying the price dearly for dropping that cliff bar, because that's when a few dudes in my group (who had caught me around mile 55) started attacking. I hadn't eaten in more than an hour, and doing too much work in the first 35 miles caught up to me fast. Around mile 65 I got dropped from my group completely and had to face the idea of finishing the race alone. Instead of eating like a smart person, I just kept pedaling, trying in vain to stay with the two other dudes who fell off the once perfect group. 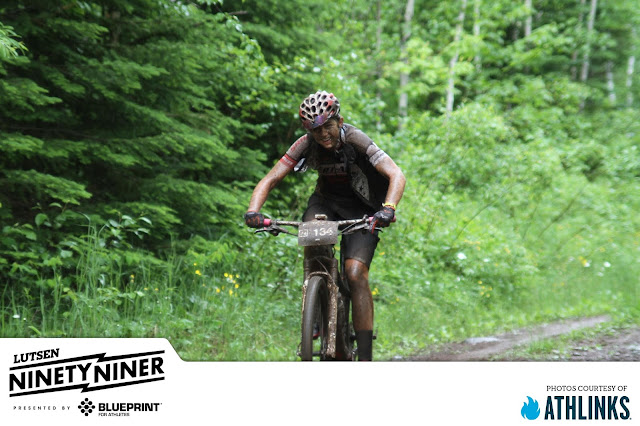 Between miles 70 and 90 the course basically just cruised along this always slightly uphill fireroad. You would crest a little rise to see another bigger rise ahead, and then another. There was no sustained downhill on which to rest, and the weather decided it wasn't hard enough to race 99 miles, so the sky opened up and rain turned the road into a squishy, inefficient, watt sucking death march.

I was reduced to counting down the miles, one one hundredth of a mile at a time. Seeing Brendan again at mile 80 was my carrot for a while but the 10 miles before the last feed zone felt like a lifetime.

I was pretty happy to see Brendan when we finally arrived at mile 80, but my relief was short lived as I had not prepared him to hand me solid food, and more bottles of drink mix didn't really do much for my severely bonked state. 5 miles later though I found a gel in my shorts pocket (I choose to wear baggies, Dirtbaggies to be exact, for the pockets and extra layer of warmth) sucked it down and almost immediately felt alive again. This was both exciting and frustrating, why was I so dumb that I didn't eat earlier?! 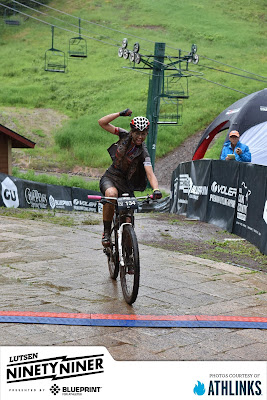 With newly fresh feeling legs and mind I enjoyed every second of the last 15 miles, bombing the ski-trail river of mud, sliding around of the 4 miles of new singletrack they routed us on and then slogging up the final 2 mile long climb to the ski resort finish. There was even small talk with the people I passed, hooting and hollering on the fun slippery hilariously wet singletrack and smiles at the finish.

Looking back it feels like I underestimated how long 99 miles is. Doing a bunch of long road bike rides in May left me overconfident about how hard this race would be and for about 2 hours on Saturday I paid the price dearly. Now, looking back, it's still hard to process the day because although I won the women's overall and came in 17th overall, I am pretty disappointed with my time, my overall finishing position (I wanted top 15) and the decisions I made which contributed to the bonking and resulting time. I finish in 6:23:47, 23 minutes slower than I wanted. The most important goal was to qualify for Leadville, but being an elite athlete can mean being really hard on yourself when your result doesn't match what you think is your potential.

This is a super uninspired race recap, to the point I feel like I need to delete it and start again, but my feelings about the race are still so confused I don't have any inspiration for an angle to make it different. The weekend ended up being about much much more than a bike race, so more on that soon. I also have some thoughts about the Leadville race organization that have been bothering me, but for now, I'm going to leave this here. Hope it isn't too boring :)
Posted by Ms Lariss at 2:10 PM