As much as I would like the idea that 'Larissa never gets tired' to be true... the reality that everyone has a limit hit me like a 20 pound brick this weekend and I have to come clean, I could barely move on Monday. Thank heavens for a day off to relax and recover from a month of excessive riding and a weekend of non-stop fun. I don't really know when 300+ miles a week started to seem normal, but I'm going to be a big girl and calm the heck down now because coach was right, it's not going to end well if I keep that up.

But I'm not going to say I regret riding 1,500 miles in the month of May, May is bike month after all.

Highlights of the month of excess include a few epic rides that we started calling 'Bad Decisions Rides' and which I never want to forget.

Bad decisions Santa Monica Hills Edition: Carl, Esther, Nikki and I rode all the miles with all the ocean views. We climbed until our legs almost fell off, laughed until I almost peed my chamois and drank cokes at the most ghetto gas station in the fanciest place. We had endless ocean views for the second half of the day and 125 miles with 13,000ft ascent to ponder just how many bottle of GQ6 and water are the right amount. Conclusion: 7 bottles, 2 with GQ-6 (all I had, but they had the endurance formula so that was rad!) 3 water (thanks rando man with the hose at the top of Mulholland) , 1 with Gatorade thanks to ghetto gas station and 1 with cucumber water from the ice cream shop I had free sample at. The ride concluded with me gorging on peanut butter stuffed pretzels while driving back to pick up poor shelled Nikki and Esther from the side of the road, followed by a meal at Peddler's Fork in Calabassas (and stem cell treatment for dessert?!). 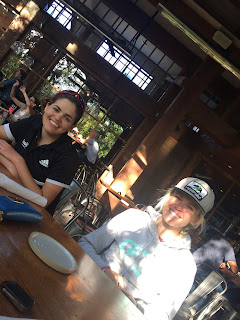 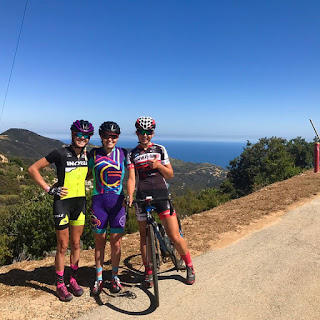 These girlies are so much fun to ride with (we missed you Lauren!!), and can we just talk about how Carl is the lone dude with three chicks... isn't it usually one girl with a group of guys in the cycling world?!

The weekend before that was an epic bad decision day, but you already read all about BWR and the suffering/drama that went along with that. Still a little shocked with how well the overall ride went and how high my HR was for the first 3 hours... that's gotta do some long term damage! 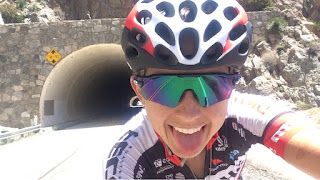 Bad Decisions ride San Gabriel Edition was the weekend before BWR. Carl and I wanted to ride the Search Brigade LA route so we convinced seasoned Search Brigade veteran Lauren Mulwitz to come make questionable decisions with us. We had to cut the SBLA route a little short since I was supposed to ride only 6 hours (which became 8 hrs), but we still ended up with 134 miles and 13,000 ft. We got to charge sandy dirt roads, ride through tunnels and started the tradition of Coke and Snickers pit stops on long rides. Because you know when you are doing something healthy like riding bikes you have to counter balance it with eating the least healthy things! Carl and Lauren had a grand old time until the bottom of Hwy 39, when both of them started to unravel. The push back to the car was an interesting traverse through all the -dales, and Lauren got lost and ended up on the side of the road only 3 miles from the car, but post ride burgers never tasted so good. 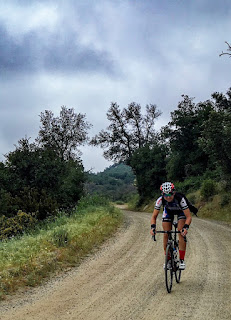 And the first Bad Decisions Ride of May was Carl and my attempt to ride the Dirty Devil route, also modified to fit my training restrictions but still 110 miles and 10,000 ft ascent. The forecast called for rain, but Carl and I threw caution to the wind and drove down to SD anyway and set out from Ramona with high hopes of staying dry. The absolute highlight of this ride for me was climbing Black Canyon rd, the most beautiful dirt road in all of Southern California. We started to get rained on about halfway through the ride and visibility was only 5 feet as we climbed back to Julian the second time so things got a bit dicey with the cars/danger factor but it was a glorious day none the less, complete with breakfast burritos from the most ghetto, I mean hole in the wall, Mexican restaurant in Escondido, plus hot chocolate for the drive home.


So as we begin the month of June, one I hope will be a month of self control and solid training, when I look back on May I'm super grateful for so many amazing rides, the bikes that took me to so many great places, and the friends who suffered through those rides with me.
And I am especially grateful for Carl, who is always up for almost any amount of suffering and who somehow continues to keep up despite being an 'old man' haha, jk Carl, you will never be old if you keep this up!