More than you wanted to know about the 2017 BWR

You know you're in trouble when 60 miles into a 130 mile 'race' you've already shelled yourself so entirely that you start counting down the miles to the finish. That's exactly the predicament I was in as I gutted myself on Mesa Grande to catch the group of guys ahead of me so I wound't have to ride the remaining 70 miles of the Belgium Waffle Ride solo on Sunday.

I've never done an event like BWR before, never raced such a long distance with so many unknowns. Is it ok that my tires aren't tubeless? Can I eat and drink enough to finish strong? How will I stack up against girls who thrive in long grueling races? And most importantly, do the pro's eat the waffles in the morning/ will there be enough waffles for me?

That tubeless tire question was the first of my worries to pose a real problem. About 30 seconds into the first dirt segment, the Cougar Pass descent, I felt the dreaded thudding of rim on rocks when my 'I'm a mountain biker so I'm going to bomb this descent' approach to the gravel grinder brought my Felt VR to an abrupt halt. Fortunately the Shimano support moto was within a few minutes of me, so after doing a little 'what should I do' dance and contemplating riding the rim until help arrived, the amazing Shimano bros saved the day and threw a new wheel on my bike.

The mechanical was a blessing and a curse. It definitely took away the pressure I had placed on myself, and I spent the next 10ish miles genuinely enjoying descending rad gravel roads and talking to all the random dudes. However I have no sense of patience or tactics, and when those random dudes and I hit Highland rd (the second of 3 timed climbs of the day), for some reason I felt it was a good idea to go all out to try and catch all the women who passed me during the flat tire debacle. It freaked me out beyond reason that I was an unknown distance from 1st and I felt I needed to bridge that gap, RIGHT NOW, immediately (despite the sound reasoning from Janell that 'we have 130 miles to catch them'). Thanks to the incredible VR, that bike is like a dream to climb on, I was able to regain the lead by the top of Highland and double bonus I found myself in a great group of about 8 dudes who were riding hard across the flatlands towards Ramona.
After stressing about all the red lights in Ramona, we surprisingly caught the lead bunch of about 30 guys at the turn onto Magnolia, and the massive draft gave me some time to relax, recover and reset. I was a bit giddy about the idea of riding with so many heavy hitting studly, strong dudes, and it may have caused me to get a little chatty, so it's no surprise that as soon as the road turned to dirt and pitched up the group started turning screws and most the dudes rode away from me. I climbed Black Canyon solo for the most part, trying to catch the small group ahead of me while trying to also enjoy the waterfalls and other scenery. At the top I was with one dude but he promptly rode away from me after we turned onto Mesa Grande. And so I found myself alone, on the one stretch everyone had warned me NOT TO BE ALONE!

Luck was on my side though because the expected headwind was nowhere to be felt, and after about 4 miles of looking up the road at that group of 8-10 guys who were 'just out of reach, why don't they wait for me?!' I decided I needed to either sit up and let someone catch me or dig deep and catch the group ahead. Since there was no one in sight behind me the only option was to turn myself inside out to catch the group ahead, and I spent almost every last match I had to make that happen.

By the time I caught the group I was too shelled/gutted to think straight and the next 30-50 miles is a blur of trying to drink/eat/get as much of a draft as possible.

Then, right when I was starting to see the light at the end of the tunnel, around mile 97, the really crappy dirt started. Dirt segments that had crazy deep sand, and rocks and the worst part was that the road was RIGHT THERE IN SIGHT parallel to the pock marked trail we were riding!!! I got dropped by my group who just hammered away across 'Sandy Bandy', my feet burned, and my pace dropped. When relief in the form of returning to the road finally came we went STRAIGHT up a massive hill. Fortunately for me this gave me the chance to catch back up to some of the group of dudes, but as soon as we hit dirt again I got dropped. And then the technical dirt started! I was trying to figure out how many more miles we could possibly suffer before the 'it's all down hill from here' point, obviously I didn't study the map well, and also praying the the other women were as shelled as I was. I spent the last 20 miles thinking every turn would take me to the final climb, and vacillating between thinking I could ease off the pace because everyone was tired and freaking out that they paced themselves better than me and were going to come tearing up the road behind me. The miles were ticking by so slowly, and when I finally saw the street sign for Double Peak rd I was incredibly relieved... until I saw how far up I had to go.
I crawled up Double Peak, fighting the feeling that I was going to barf (pretty sure I was starting to get heat stroke), tried to smile at the nice people cheering, got pushed by a man in a speedo, downed half a coke at the top (first time I stopped all day) and then limped back to the Lost Abby. 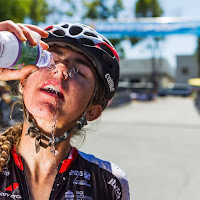 Crossing that finish line was the most relieving feeling, but the small fact that I didn't have to ride my bike anymore didn't take away from the agony. After a small adrenaline rush were I might have given some more embarrassing interview footage to add to the plethora of already existing footage on the interwebs, I promptly laid down and almost died for about half an hour. About an hour later I was back with the living, ate the amazing lunch provided by Gear Grinder Grill and completed the day with a waffle topped with ice cream, chocolate sauce, and whipped cream. 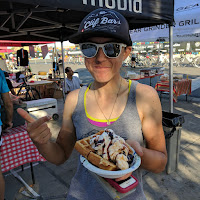 When it was all said and done I would say that BWR was pretty much the perfect day in the life of Larissa Connors: see how far into the depths of suffering you can go on the bike with cool people and then eat fries and ice cream. But honestly the memory of the pain is still too fresh to think about next year... that was something else. And I loved it. 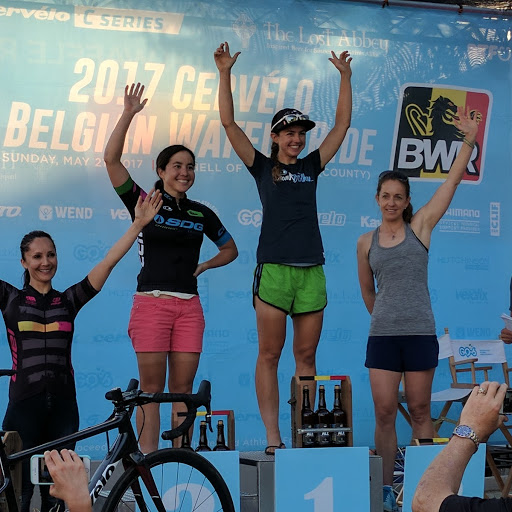 To all the people who put on this event, volunteered, manned the aid stations- Thanks for a pretty unique and fun gravel grinder/gran fondo/race experience. I would not have lived without all those bottle feeds and the whole weekend was so well put together.
To Gear Grinder Grill - Holy crap do you guys know how to make waffles and fries. I came for the food, let's be honest, and it did not disappoint.
To my Felt VR- thanks for being the perfect bike, fast on the road, compliant on the dirt, I was never uncomfortable because of the bike, and every time we started going uphill the VR encounraged me to push harder, to climb faster. I can't believe one bike could be so good at climbing AND dirt.
To waffles- thanks for being so delicious and letting me eat you twice in one day.
And to Carl- thanks for doing a bunch of long rides with me to 'prepare' for this. I enjoyed the training as much as I enjoyed BWR.