And on the final day in Moab, because I can't leave well enough alone and just relax a bit, I put the final nail in the I'm getting sick because I'm overdoing it coffin and rode twice. I couldn't just sit around while Nathan and Jeremiah rode Captain Ahab, and then I HAD to squeeze in Slickrock trail because I've never done it!

The second Ahab expedition was Much more enjoyable than the first because we took the advice of some randos I met on Saturday and climbed Hy Masa trail. That in itself was a great trail, never too steep, perfectly ledgy, just enough to make my broken down, sore body hurt just enough. Then Captain Ahab the second time was super fun. My hands suffered a bit, being sore from three days in a row of riding slickrock style ledgy trails. We talked about this on the way up, I had been trying to focus on having light hands and heavy feet, but it was super tough with so many step ups and 1 foot drops everywhere. We decided this was the one type of riding where you don't want to error on the side of light hands, and that it made sense that my hands hurt so much after riding so much Moab tech.

After the boys took off I devoured an avocado, hard boiled egg, and a free yogurt from the hotel breakfast and then drove over to the Slickrock trail parking area. When I got there I sat in the car a while, feeling worn out and debating if this was a smart thing to do. The morning's ride put me at 308 miles for the week, and this was another 10-12 miles (not super long...). BUUUUT I was already kitted up and I'm not often in Moab so the drive to ride it all won out and soon I was pedaling up the pavement to the trail head.

Once i started the 'practice loop' I was sure it was a good idea to have gotten back on my bike! All the other trails we rode had been a combo of dirt and rock, which meant lots and lots of lifting your front wheel to get up obstacles and using upper body strength to ride off drops. Slickrock was a totally different trail experience though. This trail was pretty much ALL on one HUGE (like really really really huge) rock and it was more or less smooth! I could sit and pedal the whole time, which my very tired body needed! It was ridiculously cool how the trail just wound and twisted around the rocks, going up and down their faces. Sometimes it was VERY steep up, or very steep down but the rock was grippy so it was pretty much all rideable. I would see the white dots on the rock that indicated where you should go off in the distance going STRAIGHT UP a rock face and I would get stressed but then when I got there it wasn't that bad.

I did fall over backwards once on a really steep part that I was just a little too tired to produce the power necessary to climb. I don't remember how I landed but ankle hurt a lot and I had to sit there for a minute to shake it off. Now, an entire week later my ankle is still super swollen, so that's less than ideal. BUT it was really really fun and I now agree with all the websites that put Slickrock trail in the top 10 Utah trails of all time. 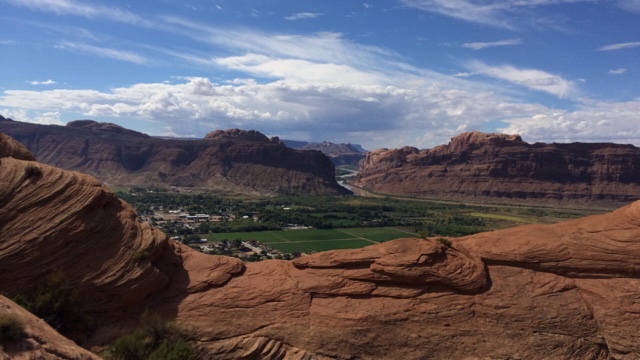 The only picture I got from the day is above. The rode was scenic, but mostly rock in all directions and I was just moseying along, but trying to keep moving so this 10 mile loop didn't take 3 hours :)

And then, as soon as I got back to the Van the heavens opened up and it rained like crazy for 2 hours. Pretty lucky to have squeezed in one last ride, and the rain was a great incentive to take off the riding clothes and be done with the trail gluttony for the week!
Posted by Ms Lariss at 8:34 AM