On our second day in Moab Brendan, co-workers Nathan and Jeremiah and I drove Van Diesel up to the top of the Mag 7 trail network and rode down a bunch a really cool slickrock, ledgy, turny stuff together.


We linked together Bull Run, Arth's Corner, and Great Escape before Jeremiah and I split from Brendan and Nathan. It was SUPER fun riding with Brendan and half the people attending Outerbike (another shuttle had dropped them off just before we got there). I get a kick out of being out on the trail with a bunch of other bike lovers, hooting and hollering, giggling in the fun parts, and chatting up randos each time we stopped to re-group. 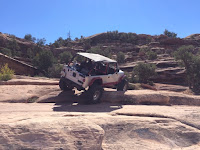 After that Jeremiah and I continued onto Gold Bar Rim, Golden Spike and ended by descending Portal trail. The whole ride took a lot longer than I expected, but the trails and views were spectacular, which I guess is par for the course in Moab. We did get lost a bit and ended up on Rusty Nail for a while, a jeep road with some super gnarly rock situations. It was frusty to have accidentally added some miles and climbing to the already slow progress of the day (sometimes slickrock riding can mean TONS of slow ledgy climbing where you are putting out a lot of watts and not going very far very fast) BUT we got to see a caravan of Jeeps drive through a section of road I had thought was impossible, so that was really really cool.

The theme of the weekend was bright blue sky lined with puffy crisp clouds. I think we were the luckiest kids to have gotten to ride Moab on a weekend with 75 degree days. It also rained while we were there, but never when we were riding (well, except for the hail storm when I was on WE on Fri).
Gold Bar Rim and Golden Spike trails basically took us along this awesome ledge for an hour. The geology in Moab is pretty mind blowing, I was stoked on views and cliffs the entire day!
To end the ride we descended Portal, which we were told is both the best trail in Moab and also the sketchiest because of the sheer drop off to the Colorado River. There were a few signs that told us to walk our bikes because it's too dangerous to ride (too narrow), but I absolutely LOVED the techy descent, and by this point in the weekend I was fully embracing the 'moab is magic' effect where you can attempt stuff that looks over your head because the rock is so grippy that it almost always works out. I may have also been screeching about how the Decree is the best bike ever each time I rode ridiculously hard, steep, rocky stuff and came out alive with both feet on the pedals. I kinda wished Carl was on my wheel the whole time because I rode some out of control stuff, and Carl would have been pretty stoked!

In the afternoon, after devouring a 1/2 off ham and cheese sandwich and nut butter filled Cliff bar I headed out for round 2, to conquer Captain Ahab. Sometimes when I travel I feel like a MTB project evangelist, spreading the word about how amazing that app is. This was the first time though that the app let me down. I choose to climb Jackson trail, because it looked great on MTBproject and it made a nice loop situation where I would get to hit a bit of Cliffhanger Jeep rd, and then Captain Ahab. Well Jackson trail was kinda awful, partly because it was washed away at the beginning, and partly because it was SOO steep at the end I had to hike with my bike for about a mile. To be honest it was also kinda not ideal because I was pretty freaking tired at this point in the week (by the end of the day I would have ridden 50 miles and the total for the week would by 296 miles). Anyway, being stubborn as I am, I kept putting one foot in front of the other even after I realized it wasn't the ideal way to get to the top of Ahab, and eventually I made it to Ahab. 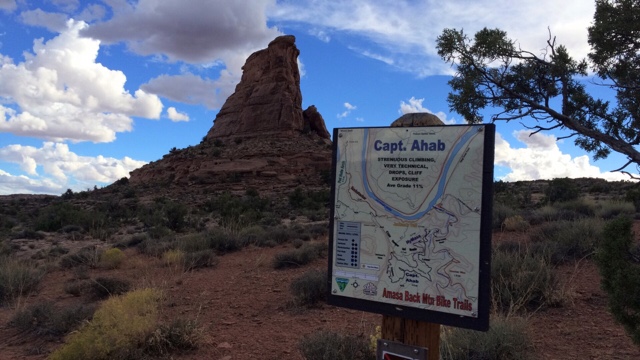 And then I had to do A TON more climbing, haha. Kidding, but the 300 or so feet of ascent on Ahab were kinda brutal because of how tired I was. The first half of the trail seemed to be all uphill, each time you started to point down the trail would turn violently and send you straight back up the slickrock, in a steep, mean, you have to stand to make it sort of way. BUT Lower Captain Ahab was a freaking blast, flying down long stretches of pure dh on slickrock goodness, where each little up was a smooth rock ladder which you could sail up using the momentum from the previous dh.

It's pretty lucky for Captain Ahab and me that the trail ended in such a fun way because my tired and starving self was very happy at the end. I rolled to the hotel the Felties were staying in with a grin on my face, and very very tired legs.

We ate at a Mexican restaurant with good Yelp reviews but the world's slowest service that night and taco salad never tasted so good.