Since I've never ridden in Moab, my plan for the weekend was to ride as many trails as possible while the boys worked. On Friday this meant taking the shuttle up into the La Sals to ride the Whole Enchilada, a trail that's been on my bucket list for a very long time.

Due to recent rain the shuttle driver wouldn't take us to the usual drop off point on Burro Pass, as he said the mud would cake to our tires and make our day miserable. I decided to pedal up the trail from the drop off point until the caking happened, in order to get more riding in because I was pretty bummed at the prospect of not getting to do the WHOLE Enchilada. 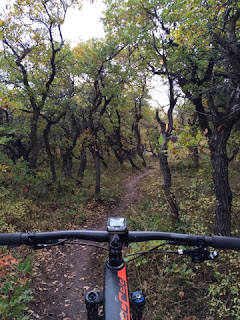 So we go dropped off at the top of Kokopelli trail, and I was immediately in heaven. The first trail I climbed was actually part of Billy Keen, a newish loop trail I heard was built to bypass the kinda boring Kokopelli. BK twisted, dipped and wove through oak trees, which were at first green and yellow, but higher up turned to a glorious bright flaming red. There was a big, moist low cloud making the solo climb feel a little like I was living in a dream, and the trail conditions couldn't have been better. The clay dirt was the perfect combination of tacky yet packed down by all the previous tires that had traversed it since the storm.

Eventually I popped out into a wide open cow pasture and found myself climbing a rad weaving trail with lots of rock pile type jumps built up on the side. This turned into more weaving through trees but this time it was bright yellow aspens, who had shed half their leaves on the trail like confetti. I couldn't help stopping to take pictures every 3 minutes, thinking I would get the picture taking out on the way up so I wouldn't have to stop on the way down (how wrong I was, the views on the way down were incredible in a whole different way). I even went so far as to take my right glove off permanently because unlocking my phone was easier with my bare thumb.
Soon I came to a parking lot and then climbed a fire road that was absolutely exploding with color. I completely lost it when I turned back onto singletrack and rode right by a lake surrounded by yellow aspens and dark green fir trees. 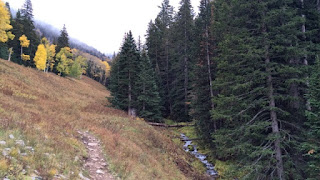 Then the trail really started to climb... a lot. I passed over a creek a few times, through a bright green mossy area that made me feel like I was in a fairy land, up a hillside next to an incredible scree field (yes Carl, you would have loved it!). Somewhere on the steep part, next to the creek, I ran into two rad dudes who were bike-packing from Durango to Moab. We chatted a bit and they let me know I was close to the top. This whole time I had been using MTBproject to know that I was on the right trail and to understand how much further I had to go. It took much much longer to get to the top than I though it would (prob from all the picture taking), although to be fair I had assumed I would only go as far as conditions were good. About 2 miles from the top I decided to just go all the way, conditions were still good and I figured I couldn't get this close without throwing everything I had at it. It was a little concerning that it took me almost 3 hours and there was still a lot of riding left, but I am incredibly stubborn and couldn't handle the idea of not making it.

So after a good mile of pushing my bike up the final ascent, which was VERY steep, I made it to Burro Pass! And then turned around and rode back down haha. I was pretty pleased with myself for deciding to ignore the shuttle driver's advice, and to commit to climbing to the top both because the trails above our drop off point were so so fantastic, but also because the scenery I got to see as a result of pedaling 2,500 ft was mind blowing. When you live in Orange County any ride with big fir trees and moss on the ground seems like absolute heaven.
The descent was wild fun. I am absolutely certain this is my new favorite trail, like of all the places I've ridden in my life, the Whole Enchilada is my #1 best ride. The 30 mile 'descent' includes everything from steep, loose gnar, to smooth bermed out twisty roller coaster, to jumps and flying fast real dirt trails through wide open meadows, all the way to ledgy  slickrock style, drop heavy tech at the end. And the entire time there was an out of this world view, first in the trees and across valleys to bright yellow aspens, and then over Moab with rock formations and big puffy clouds.
I did get lost a few times, my phone wigged out and I couldn't contact Brendan to tell him I was alright despite having been out for 5 hours, and my bike was making some terrible noises because the wet trails at the top, and a brief hail storm combined with super dry, sandy trails below wreaked havoc on my drive train... but it was one of my favorite days on the bike. No intervals, no time limits, amazing riding and endless stunning views.

And I finished the ride right as Brendan wrapped up his Outerbike demo-ing making it the perfect first day in Moab.
Posted by Ms Lariss at 4:34 PM