Getting My Life Back Together: Redemption Ride and Misc

A few weeks ago on a Wednesday, not long after I got home from NY, Carl and I attempted to do a big road bike loop from Dana Point, through Northern San Diego County and back. I guess when we've planned big rides in the past the idea is to have fun and see pretty places, but for that particular ride my motivation was a little darker, and may have included the desire to feel nothing but physical pain. Part of the healing process for me, perhaps.

The route headed down PCH, inland at Oceanside, out to Couser Canyon, through De Luz and then up the ridiculously steep Los Gatos rd before climbing South Main Divide and finally descending Ortega Hwy. The whole ride would be 150 miles and around 11,500ft ascent.

On that Wednesday, after a night of very little sleep, in a pretty fresh state of emotional turmoil, I didn't make it back to Dana Point. I didn't even really make it to Ortega Hwy, and when I did Carl determined it was unsafe to descend the hwy in the state I was in. Let's just say there was a long period of time where I laid in the road on South Main Divide "napping" because my body was just plain done. Brendan rescued me and I spent the following weeks wondering what could have been.

Well luckily enough for me, Carl's and my brains work a lot alike and this past Wednesday he agreed to re-attempt the ride with me (after a lot of begging to include the Couser climb/descent which he wanted to omit to guarantee we completed the loop).

And this time we turned up in Dana Point after 8.75 hours of pedaling victorious. Some highlights of the day include:

Cruising all the Lilac's (every road in North SD seems to be named Lilac) and soaking in the beautiful SD scenery because this time I felt good still when we left the flat coastal roads and headed inland.

Eating the best peanut butter and honey sandwich on home made bread at the Circle K in Fallbrook at mile 75ish. I didn't even need a coke pick me up in Fallbrook this time, and still felt great.

Enjoying the cruise through De Luz (not really sure why, but this area is kinda magical to me).

Although I still tacked like crazy climbing Los Gatos it was less a matter of mind over matter and more just a part of a bike ride this time. And the mesa/Tenaja were enjoyable. Last time I did some laying in the ground in Tenaja, and this time I had no desire to stop pedaling. I did eat a handful of sour watermelon purchased at the Circle K as my post Gatos reward though.
Most importantly I climbed all of South Main divide, only stopping once to fix a flat. I paid homage to the spot where I laid down and cried last time by rolling through the area and turning pedals like it was no big thing. As we climbed we saw rain pummeling the valley we had just been riding through, and Carl hoped for rain.

We stopped at the store at the top of Ortega Hwy and I was super happy to report to the very nice couple who own it that we had repeated the ride and were going to succeed this time! Last time I had limped to the store, spent about 20 minutes sitting in one of their chairs unable to make a complete sentence, and then devoured a whole family size bag of chips, a granola bar, a coke and a gatorade, before Brendan arrived to rescue us. This time I drank a coke, and ate a granola bar and some chocolate while we watched rain drench the hwy we were about to descend. We had gotten rained on at the end of South Main, and I was hoping it would stop before the already sketchy Ortega hwy.

And the part we missed out on last time, the Ortega hwy descent and pedal to Dana Point was as epic as it could get with a double header of driving rain with a searing hot head wind, which turned into just the hot wind when the rain stopped. Carl took the most massive pull when the hwy flattened out and the headwind was the strongest, and despite another flat we were back in civilization and the end of the loop before my back, arms and neck had too much time to get tired.

I've been making some questionable decision lately, fueled by pain, stress from uncertainty about the future, and maybe having a little too much free time on my hands, but this ride was not one of those bad decisions. This ride was really meaningful to me, that we went back to where I failed so miserably and conquered the route kinda felt like a step toward getting my life back together. I am still facing a lot of unknowns and am really torn about what the next few years will hold, but time is healing the hurt and every day, every ride brings me closer to a place of feeling like myself and of putting the past behind me.

AND right after we finished I jumped in Van Diesel, grabbed Brendan and a burrito bigger than my face and we drove just east of Vegas on our way to Outerbike! Brendan and his co-workers wanted to do some 'research' test riding some 2017 bikes from other manufacturers, and I got to tag along on this 'business trip' FINALLY headed out of town to just play bikes, not race them. And that's what we've been up to for the past 3 days. This post is already too long IMO so I'm saving the Moab recaps for tomorrow, BUT I'll end this with some pictures of our ride at Hurricane Rim, which we hit Thursday morning before completing the drive to Moab. 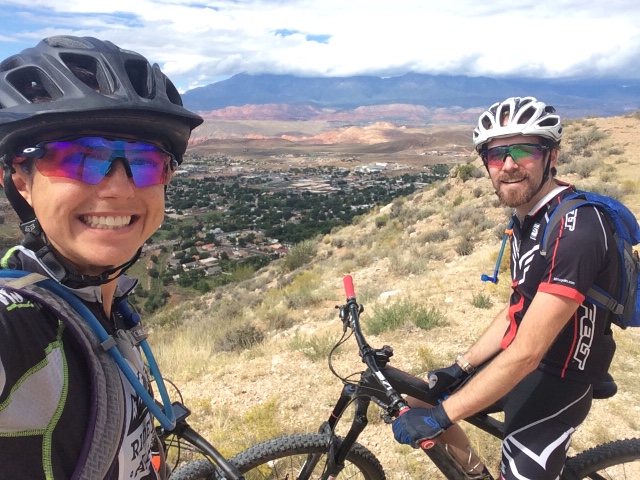 Riding bikes with this kid is pretty great. I thought riding 150 miles on Wednesday would make me ride Brendan speed on Thursday... almost worked :) We found the loop on MTBproject, my favorite app for traveling with bikes, and it was perfect until the very end when the bonking/'shouldn't we be there by now?' set in. We especially loved that it rained in the morning, forcing us to miss riding the Gooseberry Mesa loop as the road was a soupy mess, but compensating for the inconvenience with tacky perfect dirt! 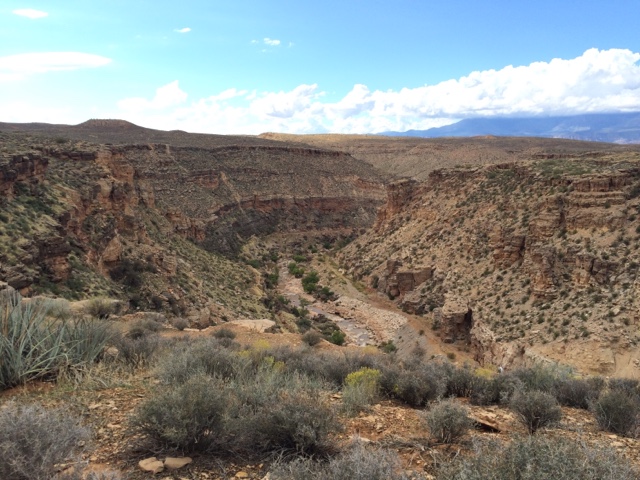 And the views were pretty spectacular. I didn't get a good picture of my favorite view because the cell phone couldn't do it justice, but there was a lot of Larissa freaking out over the vivid reds, greens and blues from the dirt, foliage and sky. Southern Utah has a special spot in my heart for sure, how is this state SO so so good?!? 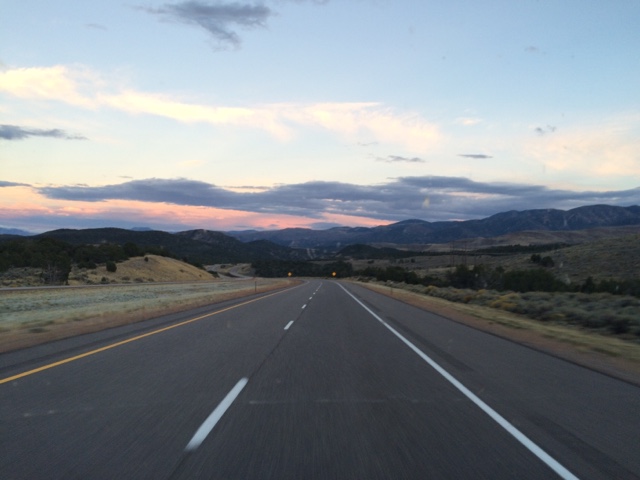 And then we drove and drove and drove, arriving in Moab at 11pm (which feels stupid late to us, another reminder we are getting older).
Posted by Ms Lariss at 3:06 PM