Yesterday I raced the World Cup in Mont Sainte Anne, Canada for the second time and I had SO much fun! The race was a blast from the start line to the finish, crashes, traffic, painful climbs and all!
Highlights included:
Sitting at the start line looking at all the photographers and realizing (again) that this is it, the top of the sport, kinda like the end of the line... It was sort of a 'how the heck did I end up here' feeling!
Going over the bars on the start lap, which was just a regular lap without the river gap in it, on a rock feature that was for some reason closed during practice on Saturday. The crash cost me a few spots, and my bars got twisted enough that I had to pull over a few minutes later to try and straighten them.
I proceeded to crash on every lap after that but in a different spot each time. Thankfully the second crash straightened out my bars, and somehow my bike stayed in one working piece despite landing front wheel first off a rock, and tumbling down Beatrice. Although I did have some good crashes this year, I crashed much less than last year, only once per lap, so I'm counting that as improvement!! Also I hear that Anneke Langvad fell down a lot too... So I'm in good company!
At the end of lap 2 I looked up at the start finish/leader board and saw I was in 26th place which was NUTTY because
I've NEVER BEEN IN THE 20's before!!!! I wanted real bad to maintain that position but loosing traction on two steep switchbacks (because my weight wasn't in the right place) and another crash cost me a few spots. It was still super motivating though because that's where I want to be and I tasted blood and want more!! :)
It started raining on is halfway through the race and I got scared the rocks would get slippery, but my Kenda Honey Badgers handled the slick roots and rocks super well and the brief rain didn't end up being a problem at all. Other than that we had phenomenal weather during our race, not hot and sunny like it was during my pre-rides!
And the best part of the race was the cheering from the crowds and Gerrin in the feed zone! So many people cheered with me (I was maybe vocalizing my excitement at having survived) after I cleaned each A-line, I think interacting with the fans is one of the most fun parts of racing!
Oh and did I mention that Gerrin, who was here as a DH mechanic, stood in the pits the whole race feeding me bottles and ready to fix my bike in case I broke it?! He is seriously the best! 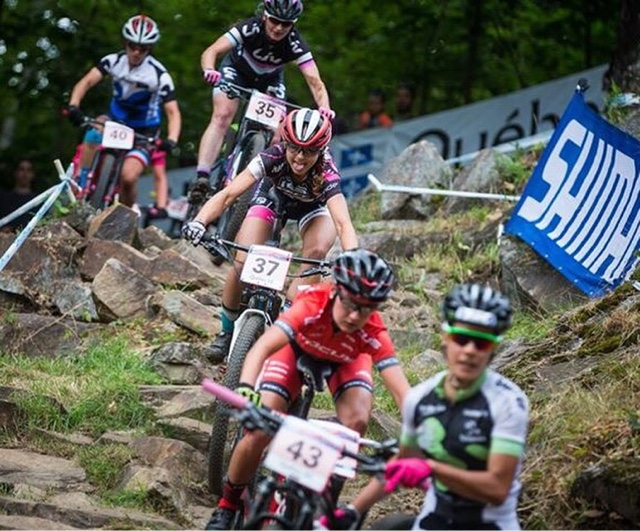 Writing this recap from the Stan's No Tubes van on the road to Vermont. We are headed in the general direction of Windham, NY but hopefully there will be riding in VT and maple creemees en route!!
Goodbye for now Canadia!! I loved you and your trails made me smile till my face hurt! So stoked to have had the opportunity to race Mont Sainte Anne again this year!
Posted by Ms Lariss at 10:11 AM