Haven't really been motivated to blog or communicate with the outside world in the past couple days. After we returned to Southern California from Mammoth I had three days off the bike, and it seemed like a good time to take a break from all the things, so I did. I also needed a bit of time to be calm and quiet and maybe wallow a bit, sometimes I think the wallowing is part of the process. I probably shouldn't admit this, but I was finding it a bit difficult to be super happy all the time, so I took a few days to just be, and it actually felt really really good.

Best part is that on the back side of the break I'm ready to face the world again, to get back into training and to be super enthusiastic about bikes and stuff!!! It's about 400 degrees here in Orange County though... so that's making the mountain biking a bit hard! 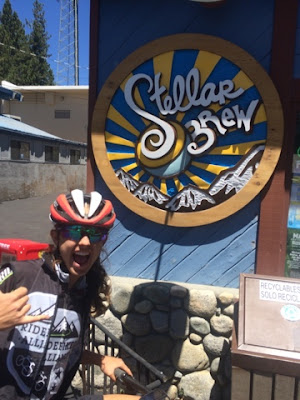 The funny part is that our #VanLife trip ended on a really good note, which was in total contrast to my Nats experience. Menso and I spent the entire day Sunday riding the lift access trails in Mammoth, and although I was dragging a bit we basically started when the lifts opened and didn't quit till they were closed with just a short break for lunch in the middle of the day. It was pretty much my ideal day of ride the lift up, rail a fun trail down, get right back on the lift, rinse, repeat. Over and over. For lunch we ate salmon wraps at my favorite coffee shop in Mammoth, Stellar Brew. It was bittersweet because this was my last meal there for the year, but the wraps were HUGE and delicious and I wanted to buy every pastry but somehow resisted the urge :)

When the enduro was over we got to ride the gnarly trails used in the race, and I had so much fun remembering how to hick and loft the Decree off the numerous ledges and rock drops on each run. That bike, it just knows what to do. Only downside to the day was riding into a pole at the bus stop in town IN FRONT OF A BUNCH OF PEOPLE and tearing my knee up, and ending the day with serious 'park claw' where your hands are stuck in braking position from too much shredding :)

AND THEN we drove to Lee Vining for the world's best fish tacos (which totally lived up to the hype) at a gas station! We happened to get there in time for a 60's cover band/hippy dance party, and with a view of Mono Lake in the background and the sun setting over Tioga Pass, it pretty much felt like heaven. 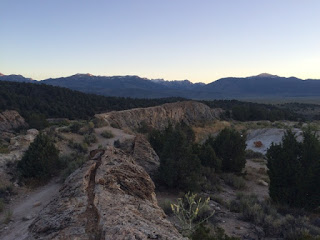 Post tacos we drove 20 more minutes north to Bridgeport and hiked down this gorgeous rocky trail to hit the world's best hot springs. It's kinda shocking I've been to mammoth so many times and never had Lee Vining fish tacos nor taken advantage of these free hot springs, but I'm so glad Menso suggested the detour. Its also kinda unreal to me that there are so many of these perfect hot tub temperature hot springs, just a pleasant walk from the road, with sweeping views of the Eastern Sierras IN THE NATURE!! After a weekend of racing and a day of riding park soaking in 103 degree water in this super pretty setting was pretty much the perfect end to the day. Bonus points for seeing a slew of colorful people at/around the different hot springs including my favorite, saggy underwear man... :)
We camped one last time on Sunday night in a campground on Tioga Pass rd outside of Yosemite National Park. It was again bittersweet, the last night in the van for the summer (for me at least, Brendan is going to camp in it in August). I loved being on the road, but I am realizing more now how tiring it was to always be on the move, everything is just a little more difficult when you are living out of a vehicle, and while it seemed loads cheaper and easier than flying everywhere, just finding a shower each day was a bit of a challenge... 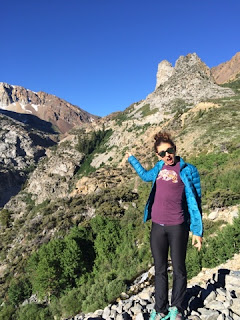 After our last campsite breakfast which was devoid of yogurt but complete with scouring maps (because that's what we do), Menso and I drove up and over Tioga pass into Yosemite. I'd only been to Yosemite once in my life, and had never been over Tioga pass so there was a lot of oooh and ahhhing from my side of the van, plus lots of other weird noises that mean I was blown away by the beauty of the rocks and trees and mountains and waterfalls and stuff... :) Menso was nice enough to drive the whole way to Santa Barbara mostly because if I drove us through Yosemite we surely would have crashed multiple times. How is it so pretty there? 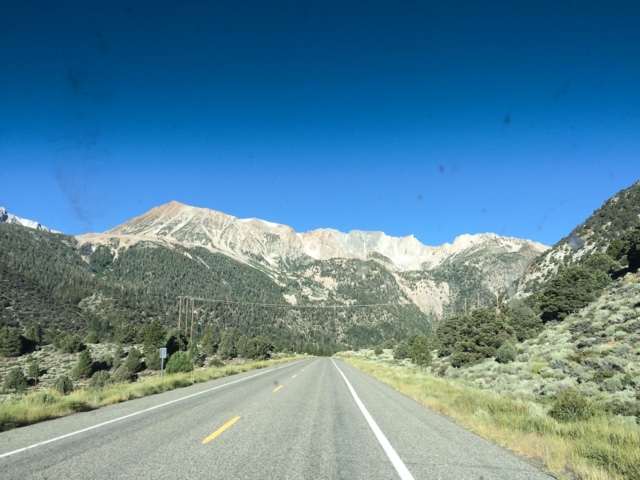 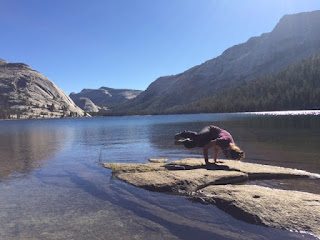 And because we couldn't help ourselves, we stopped one last time to hike around Tenaya lake, which I now want to name my second daughter after. We ended up hiking IN the lake as much of its south-western shore was knee deep a ways out. And then there was some lake yoga, and some feet dragging as getting back in the van meant leaving the Sierras and heading into the desert to get home. Fortunately there was still a lot of Yosemite to drive through, so a ton more weird noises, some quick view point stops, and a bit of tourist traffic helped ease the pain of leaving the mountains.

And then we were in the central valley...
And eventually on the coast in Santa Barbara!
After a quick dinner with Menso and his fiancee Jacqueline I headed to Orange County and my boy and my pup and my bed :)

And that's that! The second trip was 13 days long, we crammed 7 bikes and 2 people worth of camping gear in the van, ate about 7 large containers of yogurt and 4 boxes of fizzy water were consumed. We swam in 6 bodies of water, took 6 showers ate at Stellar Brew 5 times, and had a blast spending time with team mates and all the other amazing people who came to Mammoth for nationals. I wish I could wrap everyone up in my van and take them on our post Mammy adventures because the last two days really were the highlight of the trip for me.