I feel like there are a few loose ends on the World Champs fron that I want to jot down before leaving town again for the next race/adventure. Although there is a lot on my mind, especially in the mindset arena of racing, I only have 30 minutes till go time, so this is gonna have to be brief and not very deep!

I think I said this every day we were there, but the food at our hotel was amazing. I have never eaten so much meat in one week before, but each meal was so fresh and the meat was always crazy tender and delicious! Some of my favorite meals of the trip: 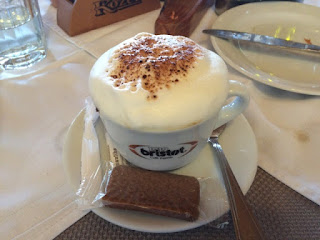 This cappuccino... oh man where did Pavel Jr learn to make foam? Because I want to go there and learn! It was soooooo dense it tasted like whipped cream. I also can't get over how ordering espresso drinks in Europe pretty much always means getting a free cookie!

The oatmeal was also so incredibly good, but probably so because it was made with heavy cream! They called it porridge which I thought was adorable the whole time :)


This meal: meat wrapped in meat stuffed with cheese! Pretty sure it was pork stuffed with bacon, either way how awesome is that?! Stuffing meat with meat?! We ate this Saturday night, so don't worry, I was done racing by then!
And then Sunday night they fed us THREE MEATS! Steak, pork and chicken in one meal! Again, hilarious and awesome! And also so tender and flavorful, I think that cow was alive Sunday morning...
After my race on Saturday post dinner the juniors and I headed back to the venue to check out the after party concert and staff race. In an effort to make the most of the experience we figured one cannot just miss every party in Nove Mesto. There was a concert/party each night and it kept me awake in my hotel room anyway, so why not be awake AT the concert instead of in bed!? We got there at 9pm when the first band was playing... 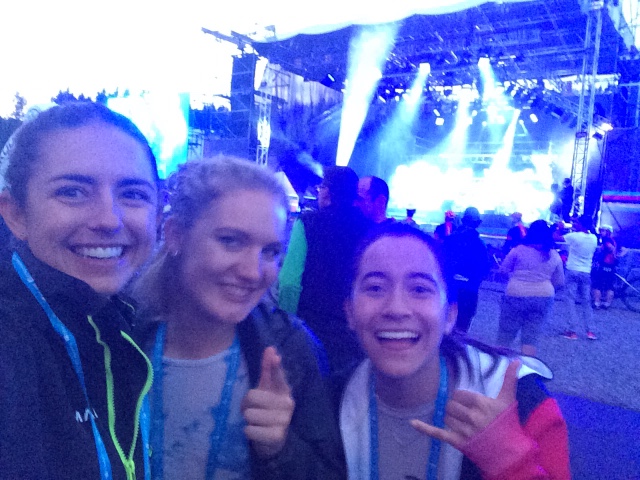 And then watched the ridiculous staff race which included a couple hundred racers ranging from serious all spandex types to dudes in Pterodactyl costumes made of trash bags. One dude did a wheelie for 90% of the race, one rode backwards the whole time, and another was on a fully rigid touring bike with panniers. In the 40 minute race the leaders lapped the field by lap 3 and it turned into a hilarious loop of people who pretty much all didn't know how to ride the ledges we were spectating at. I wish I had pictures but somehow I only took video of the mayhem. The coolest part was being in this throng of hundreds of people, none of whom spoke English, but all of whome spoke the love of bikes... it must be how football enthusiasts feel in Texas.
And of course we did some laps around the venue to check out the food vendors, where we found mountains of MEAT! hahaha Althouh we refrained from eating an entire turkey leg, we did split some poppy pastry that was incredibly good :) 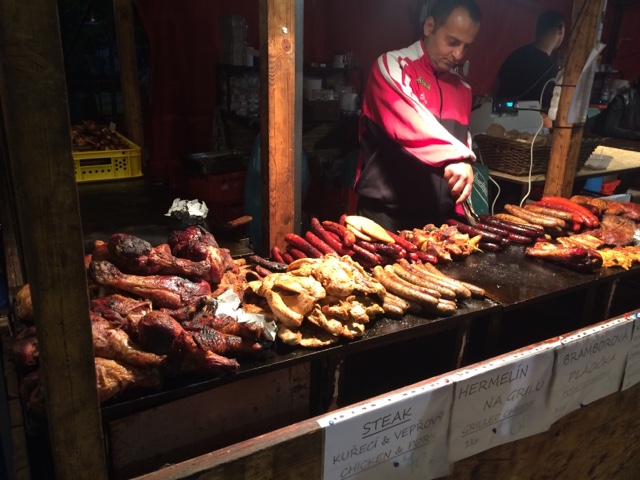 And to make the absolute most of the weekend the junior girls and I rode the sweet trails around the venue on Suday morning, and then spectated our guts out all afternoon.
The crowds on Sunday for the Elite Men's race were as nutty as everyone said they would be. There were THREE stadiums built in the woods for spectators, none of which we could get onto because they were PACKED. We ran all over the course cheering for the US men, and of course Yaro (the favorite Czech rider), which meant I was VERY sore on Monday! 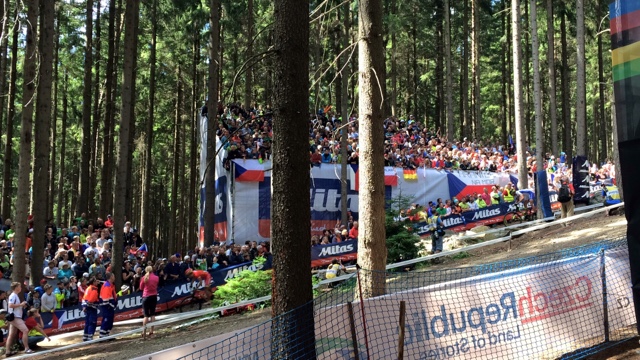 More crowds cheering during the men's race. There was also beer, meats and pastries for sale all over the woods. How funny is that, to be eating sausage and drinking beer while cheering for super skinny guys racing their bikes... haha 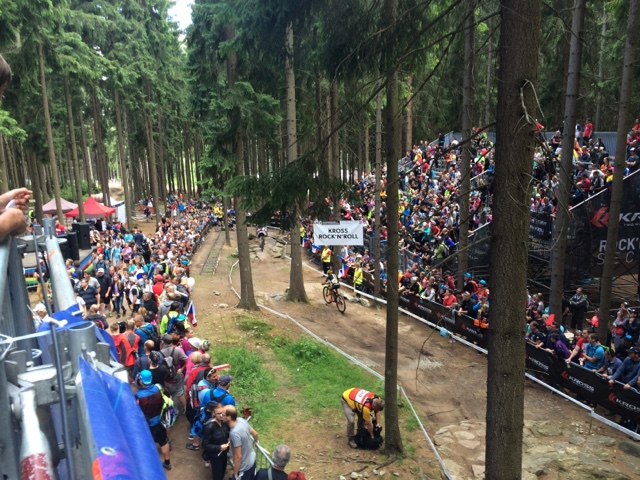 And the stands at the finish were CRAZY packed! We got there just in time to see Nino take the win and Yaro claim silver in front of his home country! 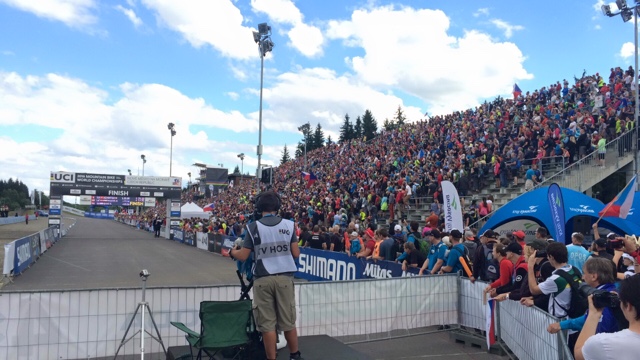 ANd then I did the sketchiest travel move I have ever done, flew home on the 4th of July. The plane from JFK to LAX was particularly nerve wracking because we landed jut after sunset which meant the whole city of LA was exploding with fire works below us. I couldn't help being nervous about terrorist attacks the whole time, thankfully the country was safe across the board!

In 15 minutes I'm off to altitude to prepare for Nationals. It was actually really nice to spend 36 hours at home with Brendan :) Although I love life on the road, I am also already looking forward to coming home again in 2 weeks!
Posted by Ms Lariss at 10:18 AM