Oh man, what can I even say about the nationals XC race yesterday? It’s hard to talk about hard races, and even harder when I feel like my season has been perforated with bad races. Worse still, this one was arguably the most important race of the season and it happened to be the worst feeling race of my career so far.


Last year I don’t remember races ever feeling like this. I was sick all summer and it sucked to race with a mucusy cough and restricted ability to breathe, but it never hurt like this. I don’t really know what’s wrong with me yet, some people are saying it’s the 6 weekends in a row of racing, or the international travel, or being on the road so long. It’s hard to think that doing what I love too much is spoiling it, that I should have skipped a race or stayed home more, because I love being on the road and racing every weekend… it’s just hard. 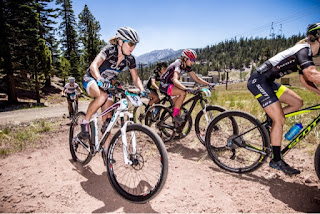 Anyway, the race sucked. My start was great just like at Worlds, I was up in the lead group on lap 1, made the selection of top 5, and then it hit me like a punch in the face. Everything just hurt unbearably bad, my heart hurt like crazy, I couldn’t breathe, I couldn’t keep riding at race pace. From that point on I just wanted to get off my bike. I wanted to crawl in a hole and hide from the world and never again have to go that hard on my bike. I even wanted to get a flat so I could have an excuse to not continue in 5th place trying to maintain a pace I absolutely could not maintain.

It’s hard to admit that this is how I felt, and some people may think I should be keeping this stuff in my head, but I have to be honest about how things go because I feel like a farce just talking about the great races and podium finishes. This isn’t the first crappy race I’ve had this year, and it won’t be my last, so I’m going to suck it up and talk about it. 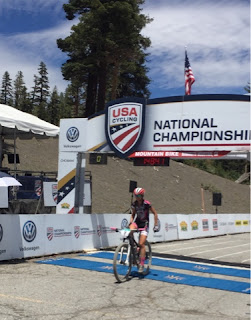 Laps 2-5 were a struggle. I climbed as hard as I could, which wasn’t very hard, and just didn’t touch the brakes on the descent because it was really the only part of the course I knew I could do well on. Each lap I prayed for a flat on the descent, and at the bottom of Shotgun trail each time I cursed my bad luck at making it down in one piece because then I had to go up again. On lap 4 Evelyn and Amy caught me, and I stayed with Evelyn through the bottom of the last lap. Then she attacked me on the last climb and I let her ride away, sealing my fate of 7th place.

I don’t think I’ve ever cried tears of disappointment after a race before. I kinda had to ride away and find a hiding place to cry my eyes out, and then cried again every time someone asked me how my race went all afternoon.

It’s so so hard to keep perspective, to remember that it’s just a race and there will be more races in the future (one in an hour in fact!) But the hardest part if investing so much of my life into acclimating to altitude, visualizing success and feeling so good early in the week just to had a shitty result. To have so many people telling me they think I can win, and rooting for me, and to feel like a disappointment. To have such incredible people working for team Ridebiker who did so much for me in the last two years, but also specifically at this race and to feel like I didn’t perform despite their hard work. That is the most soul crushing part of it all. BUT I know they all still care about me and are not going to leave me because I placed 7th instead of top 3… so perspective.

There are times when this 'job' seems so clear cut and simple. I train, I eat well, I rest when I'm supposed to, and then on race day I go out and give it everything I have. Then there are times when it seems so incredibly complicated. When I don't understand why I felt so bad during a race, when my mind screams no but I have 4 more laps and I have to somehow survive to the end. When I question everything I do, every decision leading up to a specific race because it just doesn't make sense why I felt so bad. This was one of those races. I think it's been a specifically confusing year because I expected everything to come together, and instead I'm facing all these confusing results and horrible sensations. These are the times I think I need to focus on the other aspects of the 'job' outside of specific results, so that's where I'm trying to go. Maybe now its time to focus on resilience and gratitude and cheering on others. And the good news is, that can be just as fulfilling as winning a race.

And now I’m going to leave this pity party behind, I’m going to stop crying every time I think about yesterday, I’m going to put the smile back on my face and do my best to have a blast racing short track. At the end of the day it’s still riding bikes, and riding bikes should always be fun :)
Posted by Ms Lariss at 3:08 PM