Day 3 of World Championships week, Wednesday June 29, was the first day I was able to get out on course. Rose, my room mate at the hotel, and I accidently slept in till 10am (take that jet lag!) so we got a much later start than anticipated. It worked out will though to choke down a quick breakfast of banana and toast, and then spin over for 2 mellow laps.

The course starts in a stadium, which is wicked cool because it means there are going to be a TON of spectators at the finish! Have I mentioned they sold out of tickets for spectators a while ago, at 50,000 tickets!
Course map, it's a crazy maze so spectators can see tons of action on foot in the woods! All the green sections are crazy cool, but between them is always rooty and rough so it's pretty much always good!

Not just one big climb followed by one big descent like usual!

Then the track immediately drops you into some ledges which are quite rough with suspension locked out (haha) and then into two jumps, the first of which is pumpable, but WAY faster if you can jump it, and the second is a table top. Immediately after that there is a man made rock garden of the ‘we dug a 100ft long pit and filled it with big rocks’ variety. Don’t worry, it’s not hard, just funny/fun. 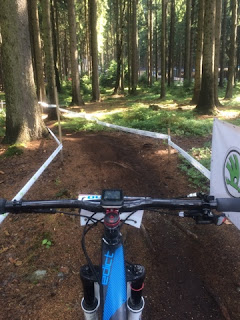 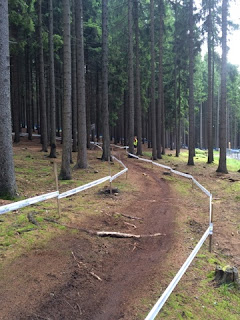 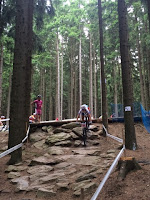 After that there is a freeway wide climb, followed by some pavement, and then a (seemingly) never ending combination of rooty, techy, challenging climbs alternating with rooty, jumpy, challenging descents. It’s seriously the most fun course I’ve ever ridden because each climb is short enough you just think about the crazy fun descent on the other side and before you know it, you’re there! 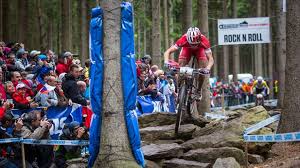 Obvi. not a picture of me, but this section is crazy fun!!

The climbs aren’t just put the hammer down and charge kind of climbs. They are steep, and rooty, and you have to have at least a little finness to get up and over some of the rocks and roots while you’re already climbing on crazy steep sections. The descents alternate between man made rock challenges to rooty fun natural sections. Some of the challenging parts have names, like ‘Midas Choice’ where there are two lines, both through some sharp, tricky rock drops, and ‘Rock and Roll’ where there are three man made rock obstacles that look really intimidating. The natural sections are crazy fun too, and the more I ride the track, the more jumpy I feel on the roots, which makes it smoother and EVEN MORE fun! I wish I had a go-pro to shoot a whole lap because it’s seriously the most ridiculous/fun course I’ve ever ridden.

The best part is that I somehow had the confidence and guts to blindly ride all the A-lines on the first lap I did, and was able to clean all of them! Compared to my experience at the last two world cups, this was a huge confidence booster!
Post pre-riding on Wednesday, there was a massage, amazing dinner (every meal here has been amazing) and then the opening ceremony, which included team presentations, a light show and a crazy dance performance! We left before the opening ceremony was over because it started at 10pm (!) and we could hear it from the hotel until 12am!! 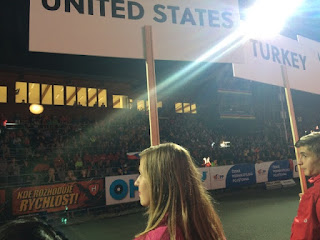 
Day 4, Thursday (the day before the day before) has been all about more pre-riding, resting and tonight we will go watch the team relay. The relay will involve 1 junior, 1 U23 rider, and a male and female elite rider all doing one lap each. I’m pretty excited to be a spectator, and to hit the fan shop, yeah, there is a fan shop here!! I had planned to walk to town and drink some coffee at a local shop/buy some post cards this afternoon, but an epic rain/thunder storm prevented me from being on my feet that much, which is probably a very good thing :) Instead I’m writing in the hotel resturaunt, snacking on a banana, almonds and some honey, and sucking down hotel coffee. Yeah, life is pretty darn good!