The epic bike racing road trip of 2016 got a rough start yesterday, when the stereo died on my way into town to pick up some prescriptions and deliver lunch to Brendan. My planned departure time of 1pm became 2:45 because the ever hard-working and caring Brendan COULD NOT handle the idea of letting me drive 11 hours to SLC without music. So he spent his lunch break troubleshooting and rewiring the stereo, and he fortunately got it going again! As a result I listened to 6 hours of terrible top hits on the radio on the drive to St George, and it was awesome! What was NOT awesome was the 2 hours of traffic I sat in just to get out of SoCal. Seriously, more than 2 hours to get out of San Bernardino. So what should have been a 5ish hour drive was really more like 6.5-7 hours.

BUT what WAS awesome was the hour spin I did during the last hour of daylight in the Mojave Desert. It was so hot out that my planned stop in Barstow didn't seem like such a good idea when I rolled through around 5:30, so I pulled over on a random road at 6pm, jumped on my road bike and was treated to the most pleasant, straightest ever road shrouded with Joshua Trees.  AND THEN THE SUN SET :) It was way more magical through my Oakley Prizm sunnies, as most sunsets are, but I still took about 50 pictures, none of which turned out :) 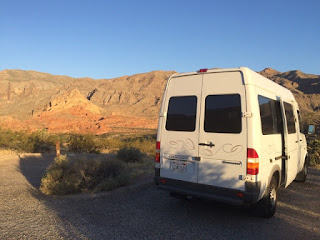 Fast forward to waking up at this accidentally beautiful camp spot this morning at the AZ/Utah border. Turns out whatever fuse is broken in the stereo situation also means the ceiling fan, which worked on Wednesday, also doesn't work now, so it was a little sweaty last night, but I still managed to sleep like a rock in the van. Maybe having windows that crack open in the back would be nice. Extra bonus not having to set up a tent OR go outside to make breakfast/get on the road!

And before getting back on I-15 to finish the drive to SLC I hopped on my Edict and hit the Zen trail. It was a 6 mile loop of perfect desert goodness, complete with lots of step ups, drops, techy but grippy climbing and super fun-rocky-fast descending. I got lost a few times, but LOVED it! 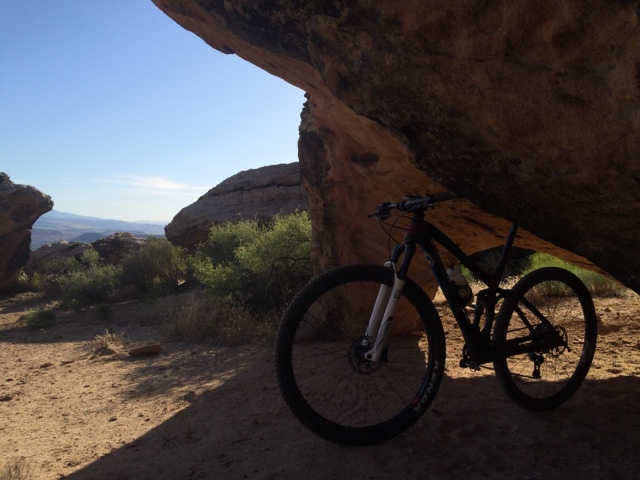 Also, these wheels... have I mentioned how much I LOVE them?! The super wide rims + Edict goodness were a match made in heaven in the desert. I just freaking love this bike!


The trail I rode climbed up along this rad cliff to an overlook of a big old brown desert valley. I rode pretty early to beat the heat and the shadows were long, the sunlight was bright and the wildlife was still out. A cute little desert fox even graced me with his presence on the trail!

Of course I used MTB Project to figure out where to go. I can't stress enough how great this app is on the road. I have used it all over the US to find trials when I'm traveling, and it has NEVER let me down!

Now I'm off to find a tortilla to build a burrito with my beans, rice and avocado before finishing the drive to SLC!