So I mentioned a while ago that Brendan finally found the Sprinter Van of his dreams, and since then we've gotten a lot of questions about the van life :) We are full bore in van conversion mode, so here are some deets about the van and what we plan to do with it!
The van is a 2003 Dodge Sprinter and it came with 105,000 miles on it. Considering these bad boys usually have 300,000 + miles on them, we feel pretty lucky to have found one in such great shape with such low mileage. It is a passenger van, so all windows and bench seats were in tact when we bought it.
First of all Brendan was looking for a van for months and months before he found the right one. Every night I would find him on sprinter van forums and car sales sites, obsessing over the vans on the market, and since we purchased the van he spends every waking moment on forums about van conversions. We looked at a lot of vans too, lots of clapped out crappy broken down vans! Eventually we realized you have to spend around $15,000 or more if you want a van that isn't rusted out with broken windows and a falling apart engine. We spent about that much. Since I am frugal to no end, and we don't really do anything besides work and race bikes, Brendan had saved a considerable sum of his earnings to buy a van. To be honest, it did and still does make me uncomfortable making such a large purchase, but on the flip side I will be living out of the van in June and July while traveling to races in the mid-west, plus this is Brendan's hobby/obsession, so I shouldn't complain :)
The first thing we did with Van Diesel (ok, i know that is a terribly lame pun, but until we have a better name...) was to drive it to Sea Otter with 5 bikes and a huge bike box in the back. No amount of tetrising could have fit that much stuff in the Prius, so the van was already proving itself useful! I was pretty happy with how comfortable it was to drive and to be a passenger in, especially on the drive home, when I sat in the back seat with my legs sprawled out across the bench seat! Brendan was very unhappy with the noise level though, so the next course of action was to research the crap out of reducing noise while driving the van. 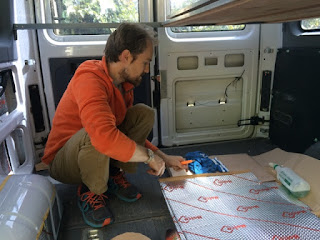 And that's the stage we are in now. The van has been gutted of all interior panels and what not, and we spent the weekend installing sound deadening material. The foil stuff to the left and below helps damp the vibrations of the sides of the van as we drive. Brendan also plans to put in this poofy looking white fluffy stuff to absorb sound, and also a layer of thick vinyl to block sound. He likes to go overboard :) 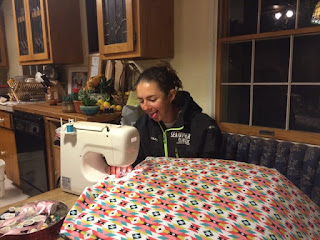 Along side operation 'make the van super quiet' is operation stealth. Since I will be driving the van to a few races, and sleeping in the back along the way, we needed to make window covers so I can park the thing anywhere and sleep without interruption from randos or whatever. Also, windows are not great insulators, so we came up with window treatments that would help keep warmth in, and weirdos out. These consist of a layer of felt, some foil insulating stuff that looks like bubble wrap, some of that fluffy white batting stuff in and a final layer of pretty fabric. I spent a lot of time sewing these over the past two weeks (and realized I sew like a drunk person) and this week we will install magnets into the window wells to help them lock into place.

Future van conversion plans include purchasing some solar panels, batteries and an inverter (is that the right word?) so we can make electrons to power a fridge! This prob wont happen until after I drive around to Utah and Co and Montana... so it's going to be the cooler life plus a mini camping stove for me :) We are also going to instal a stove and a composting toilet (you all know we have experience in that dept!) and a shower, plus make the bed foldable or something so it's not always in the way. We are knee deep in the argue about everything phase, I want it to be all about living space and comfort while Brendan is interested in maintaining the ability to use it as a utility van, but that's half the fun of a project like this. What did I miss? Any other questions about our van and how we are JUST LIKE EVERYONE ELSE not unique at all but loving it?! haha. I will post more when phase one is done and I'm ready to roll to Utah, until then, back to sewing window covers!!