From the Mud Filled Trenches of Le Bresse


I went to bed Saturday night already completely satisfied with my experience in Europe, the race Sunday would just be the icing on the cake. I learned so much about myself and bike racing over the past two weeks I felt I’d ‘gotten my money’s worth’ from the trip.
\


But as we lay in bed the heavens opened up and the most magnificent/scary thunder and lightening storm rolled through the valley, complete with a deluge of rain. My biggest fear for the race came true: a wet, slick, muddy course. Conditions I am the least familiar with, and which I didn’t get to practice because from thursday through Saturday the course was drying out and getting better and better.

But as the French say, c’est la vie. I rolled out the door Sunday morning to warm up scared but still feeling good about the trip and the day.

My good result in Albstadt only earned me a call up 7 spots better at Le Bresse, but the race began with a long paved climb that didn’t funnel into singletrack for almost a kilometer, so I wasn’t crazy nervous about it. The first climb was a complete mess though, as soon as we hit the dirt there was pushing and elbowing and I got shoved off the trail into uneven/slick grass multiple times. Then we were all off our bikes running up a particularly wet and rocky steep section. I followed Georgia Gould’s lead and tried to pass on the run by going up the rocky side of the trail, but didn’t make much progress. 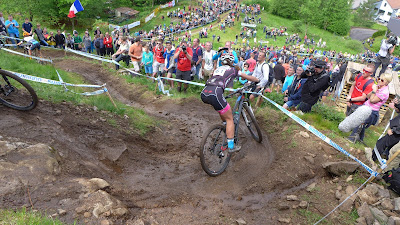 The first descent was crazy too, having never ridden the rocks and roots in slick conditions I wasn’t sure how it would be, but it turned out the short/steep climbs were trickier than the scary rocky A-lines! I hit every A-line because they were fun, even launching things I rolled in training, but slid out on many of the climbs and did A LOT of running. I also did a fair amount of crashing and getting ‘stuck’  as the race progressed, because the person in front would hold me up enough that my pedal strokes would be off from what I had been doing in training, resulting in striking rocks/getting stuck in rocks/just plain falling over… There was one section near the bottom where I took the A-line option on every lap, but ended up ON MY ASS in the mud sliding down it rather than riding EVERY SINGLE TIME (except lap 5 when I finally had the sense to STOP TRYING TO MAKE IT WORK)! It was just so slick there was NO staying upright, I heard even Yolanda, the race winner and gutsiest of all of us, crashed there.


So laps 2-5 were a pretty fun loop of suffering like a dog on the climb, trying my hardest to leave nothing on the course in the portion I could control, and fighting to stay upright on the descent. I would pass multiple girls on the climb each time, and then get overtaken by one or two on the descent for various reasons. The highlights of these was getting passed on the descent on a drop by Pauline Ferrand Prevot, who launched herself off a ledge to my right passing me IN THE AIR! It was equally terrifying and incredible. I also spent a few laps with Julie Bresset, a very accomplished French rider who had EVERYONE on the course cheering their brains out for her, so that was pretty cool.


But all good things must come to an end, and after about an hour and a half of bathing in mud and suffering on the climb, I crossed the finish line somewhere in the low 40’s (still better than my start position I might add). I can honestly say I had an amazingly good time racing, despite not finishing as well as I wanted, but what can you do when multiple times you find yourself with your pedal stuck in a rock and you CANNOT get it out for the life of you, or your shoe stuck in course tape and wood stakes and you’re off the back of the saddle and the slope in front of you is wicked steep and slick, and your foot is just stuck there… yeah, I wasted a lot of time stuck or crashing… I’m going to work on that :) Evelyn Dong told me once that your first season racing in Europe is a test of whether you are made of the stuff that compels someone to gut themselves to finish 35 instead of 36, and that was very much my experience in Le Bresse. Like I had to pin it to the line because there was a girl on my wheel when we entered the finish area. Don’t worry, I beat her. 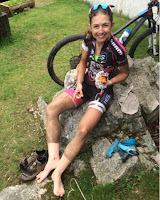 And then we washed bikes and rolled up the hill to pack because Colin’s flight was Sunday night. The highlight of Sunday afternoon, besides watching the men’s race with binoculars from our rental house while we packed, was eating an incredible pastry Colin procured for me that I had been eyeing all week but abstaining from eating because ‘race weight’. It wasn’t anything like I thought it would be, but the fluffy, incredible panettone goodness was a pretty fantastic way to end the trip. Oh, and the drive through Munster, France to get back to Stuttgart, Germany was out of control pretty too!


So I am still feeling overwhelmed with gratitude for being able to make this trip, and there are so many people I want to thank for making it happen, but it’s hard to incorporate that in a blog post that’s already this long. So for now I’m just going to say that I am so so grateful for Brendan. He took all his vacation time to come to Europe with me, to be the chauffeur, tech zone guy, photographer, and general go to guy to make stuff happen. He rode with me, went to bed early with me, cleaned and wrenched on my bikes and basically spent 2 weeks in Europe not sight seeing but working an unpaid position as my support crew. I am so so lucky to have such a dedicated and selfless husband. I will repay him with waiting to have babies until he is ready ;)

Oh and the pictures suck because I am waiting on a certain someone... ah hem, Colin, to send me his super rad action shots from the race!! Thanks Colin!!!