The course in Albstadt is amazing. It has some wicked steep climbs and equally if not more wicked steep descents. The first day I rode it, on Thursday on a bike that was a size too big with high tire pressure (there were tubes in the tires) I was terrified. It had just rained that morning, there was an insane amount of mud on the track and I basically just slid around on the descents, completely out of control. I was pretty freaked about the race and how I was going to hold it together for 6 + laps.
Then the sun came out and each day the track has dried up a bit, making it more and more fun. Don't get me wrong though, it still feels like someone dumped a ton of oil on the descents, making them slippery as heck. Even Brendan mentioned while helping me clean my bike that the mud was greasy.

The course consists of two main climbs and two steep descents. The first climb starts off with a manicured, not too terrible grade, followed by some swoopy turns (a mini descent) and then a grunt of an ascent to the top. After that there is a super terrifying left hand turn called Devils corner. It's got all kinds of slick roots in it, it's super steep and completely terrifying. I have yet to clean it! Don't worry though, there is a B-line around it :)
From Devil's corner the course continues down a crazy steep out of control free fall, through super mucky, wet mud, and then over the Albstadt Drop, a small drop that was WAY scarier when it was wet, but is now fun. Immediately after the drop it's steep and slippery and I can't not laugh like a crazy person every time. It's crazy fun in that, HEY I'm still upright! kinda way.

Then the course passes through the feed zone at the bottom before winding back up another manicured climb. The second climb has a few steep as crap switchbacks, but nothing Holy Jim, San Juan Trail and Laguna haven't prepared me for :). And the last descent is steep, slippery and basically all switchbacks with slick rocks in them. After the second descent I'm also always laughing out loud, I just can't help it. It took me about 4 laps to nail the second descent without dabbing (putting a foot down) but I think I have it at this point, just don't touch the rear break and you're fine. One little tap of the rear brake and your rear tire is immediately next to you and you're crashing! No pictures of the second descent because Brendan and Colin didn't know where it was :)

Oh yeah, and after that there is a rad wall ride, well two of them! I've never ridden a wall ride before and I hit it on every lap yesterday and today! It's not THAT big, but pretty exciting for me!

And just picking up my number was pretty freaking exciting for me. I still can't believe I'm racing in Germany tomorrow!! This is seriously such a huge dream come true for me. Being here alone is blowing my mind!!! 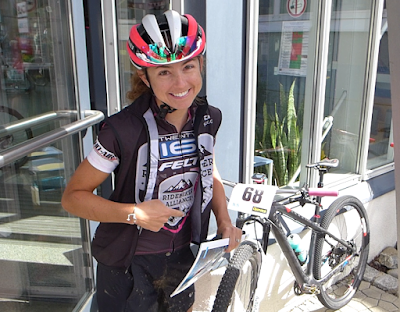 You can watch the action at redbull.tv at 11am German time, but let's be realistic, they focus on the leaders and I'm starting pretty far back, so it'll be a miricle if you see me at all! Haha, but it's still exciting, so watch it!