Sea Otter is always one heck of an epic fun/exciting/exhausting weekend. There are so many people to see and thank and hang out with, there is racing to do and there are always shenannigans to top off each 'successful' day surviving the madness. This year was maybe the most eventful for me, and the event deserves it's own recap, but for now a quick recap of Saturday's HC cross country race. 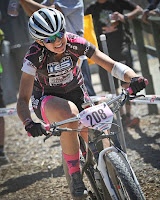 This race was the second of the US Cup series, and the third in a three weekend long block of races for me. Following my Fontana success, crash, and struggles at Bonelli #2 I wasn't really sure what to expect, but I knew there were almost 60 women in our field including many national champions from all over the globe. Fortunately the elbow/hip wounds took a dramatic turn for the better Friday night (which I actually slept through completely for the first time since I crashed) so that gave me some hope.
The start was fast, as to be expected, but the course took us up the pavement from the line all the way to the top of the Laguna Seca race track before spitting us onto the crazy short, physically challenging HC level course. This was great for me, and by lap 2 I was sitting in the lead group of 8ish riders, relaxing on the climb and doing what I had to do to stay with the group on the descents. Every corner was incredibly dry, loose and off camber, so I had some issues in the middle of each lap (I'm pretty sure I should have worked on these more pre-riding, so that's something I'll do different in the future) but had good enough legs to bridge back up on the flats/climbs.
On lap 3 of 6 I was starting to think about strategy. The group I was in was big, and all the girls around me looked like they felt great. I was struggling on the descent-y stuff, so I was going to have to work the climb to chisel down our group or I would end up 7th-ish at the finish. The end of the course was a techy obstacle course through some random bridges/woodchips and tight turns which meant positioning was going to be HUGE coming into the final sprint. Positioning is something I'm still working on, so I didn't want it to come down to that.

Then I got incredibly lucky, and one by one girls in my group started having mechanical issues. We went from 8 strong to 4 by lap 5 and on lap 6, even though I got gapped off the lead group of 4 Luna Chix riders, I was feeling comfortable about not getting caught and was able to concentrate on maintaining and finishing strong rather than stressing about strategy.

And that's how it played out. I held my position, crossed the line in 4th and a HUGE wave of appreciation for my mechanic and equipment washed over me :) Although I felt a little guilty standing on the podium when there were so many deserving girls in the race who suffered mechanical difficulties, I know that this bike racing thing is a team effort and the team behind me delivered me to a podium finish on Saturday. I appreciate Derek's hard work every weekend (esp last week when he washed all our muddy bikes) but I feel like this one made me especially grateful to be on such a solid team working with such incredible people.

We have to hit the road to drive home soon (after a quick ride in heaven aka Santa Cruz), but I have much more on my mind about this past weekend. I'll leave it at this: bike people are hands down THE BEST!