I've been experiencing a lot of firsts lately, which has been super rad, but super weird to me. This is my third full year racing the Pro XCT circuit, as well as many of the other major races in the US, so I kinda figured everything would go the way it always goes. The weather would be how it always is and I would eat the same pastries at the same bakeries I always do... wait, pastries, what!?

Last year was very much same same everywhere I went, and I was a little worried it would be less exciting the third time around. Vail lake, Bonelli #1, Fontana, Bonelli #2, Keyesville, Sea Otter... same same. But the Gods have been conspiring to make this year one to remember, and even though we are just getting started really, SO much has been new, exciting, challenging and different this time around!

Here is what I'm talking about...

Saturday, March 12: First ever random pee test at a bike race. I waited SO long for this day and it did not disappoint. It took me 2.5 hours to pee the right amount and now I know why everyone else complains about those things :) Either way, that was pretty much a #bestday

Saturday, April 2: First ever UCI race win at Fontana City National. Not much more to say here except that I didn't really expect this to happen... EVER, so it was pretty cool. I could replay that feeling of wrapping up the last lap with a 2 minute lead over and over and never get bored of it, but I guess what would be better would be to do it again :) 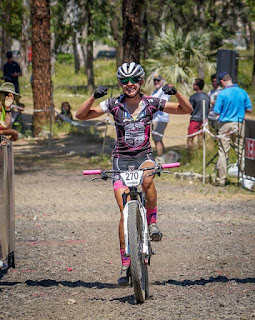 Wednesday, April 6: First big-ish mid season crash ever which led to a pretty rocky week of uncertainty about whether I should race or let my body recover. I've never been more torn before between doing the obviously smart thing in resting vs the potentially reckless but may result in lots of points decision to race. That was a week of pro/con lists in my head I'll never forget! I'm pretty lucky to be surrounded by so many smart, caring people who helped me make the decision to race Bonelli #2 which ended up being the best decision! 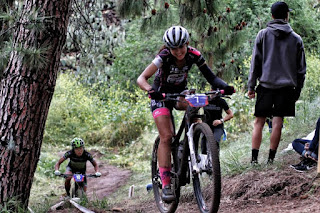 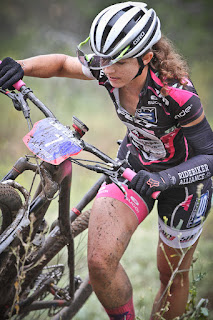 Saturday, April 9: First time I've toed the line with the injuries. Now let's be honest, I'm a bit of a wimp when it comes to road rash type pain, prob anyone else would have been all 'NBD' and never thought twice about whether or not they should race. BUT my elbow hurt like a beezy and the bumpiness of the course was pretty unpleasant resulting in my first 'I sucked it up and raced anyway' accomplishment :) Again, prob not that big of a deal to some people, but I was damn proud of myself for sucking it up and hanging tough!

Oh! Another first for this race was the weather. I've raced in the rain once before, but never in such slick, sticky, gnarly conditions, and it was CRAY! It kinda added to the epicness of the weekend that we were covered in mud, and freezing cold at the end and slipping around/falling off our bikes/running a bunch in the race!

Saturday, April 16: First ever US Cup podium!!! Also first podium at a HC race which basically means there was crazy strong competition and LOTS of points on the line. This was also the first race where I crossed the line feeling unbelievably grateful for my mechanical support from Brendan and Derek. I'm always grateful for their hard work, but this podium was 100% due to their hard work and flawless bike tuning :) I can't accurately describe the sense of pride I felt not for my own performance but that of the team. I love that I get all these different feels at the end of races (and during and before and after...). Riding for Team Ridebiker is THE BEST! 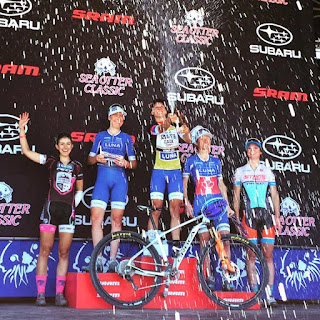 Soooo yeah, so far same races, vastly different experiences. I know there will be many more firsts in the future, some good and some bad, and the hope is I will accept them/deal with them with grace and composure, haha. This is a whole other post for a whole other time, but one of the biggest life lessons I've learned from racing bikes (both before I was pro and now) is that there will be highs and lows, and how you deal with them is way more important than the actual thing you are dealing with. But the point of this post is that this season has surprised me in many ways so far, and I think that's kinda cool! I'm learning and growing as an athlete and a person and that's all you can really ask for in the long run, right?!