There are two stories to be told here.

The long story of the race: Not sure if I'm the only one, but no matter how long I race bikes, I still get pretty psyched out before the first race of the season. This year I am super lucky to have some crazy fast competition at the Kenda cup races, two local ladies Nikki and Jane, who have been FLYING up the ranks, and are now racing pro for the first time this year. It's great to have competition (last year I was THE ONLY FEMALE PRO at some of the Kenda Cup races), but I was also pretty nervous about racing these shredders who I know are way strong, and super good technical riders. 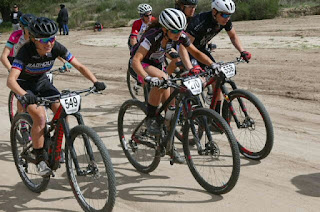 The race started with pro men/women combined and the three of us settled in behind the pro men briefly, before passing a few of them and splitting up a bit. Each lap was 7.6 miles, and consisted of basically 3 loops which took riders up a fire road with a roaring headwind, and then down some great single track with a ripping tail wind. I was solo for all the fire road headwind sections, which made the race super physically and mentally challenging. The dirt was perfect from the morning's rain though, so I had a great time descending, and was stoked with the tire selection we made for this race. I went with Kenda's 2.05 width Honey Badgers, mostly because I thought it would be muddy, but they turned out to grip the damp sand perfectly, and I was able to corner harder than normal/push myself descending.

So the race was basically 1.5 hours of suffering like a dog in the headwind by myself, freaking out about the potential for Jane in 2nd place to draft a group of cat 1 men and catch me without having to work too hard, and ripping the descents to guarantee I didn't loose any time while recovering as much as possible. I admit I was pretty much a head case for the first two laps, but the third lap rolled around and I started to enjoy racing a bike a little more, got to cheer for a rad HS shredder Jenny, and ALMOST took a beer hand up (but decided not to waste the beer because it was not just a PBR, it was a real, fancy beer). Also, I'm trying to act more professional and stuff... there is a time and place to be a spaz :) working on dialing the spaz down when I'm racing. The spectators were incredible at this race, including a kid yelling from the side of a descent that his girlfriend love me (??) and tons of stoke from everyone there.

And then, after what felt like a lifetime but also the blink of an eye, it was over and the first race of the season was in the books with a win! 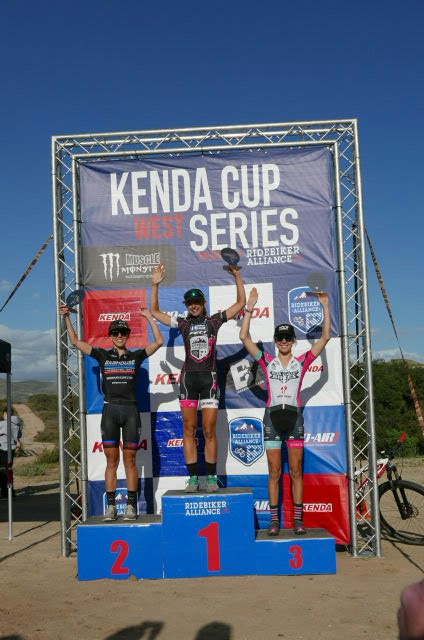 The thing that stands out in my mind the most about this race (along with the realization that I have won it 3 years in a row!!) is how much successful bike racing takes a team of people on the riders side and on the race organizers side. I am so lucky to have an incredible support network behind me, from everyone at Ridebiker, sponsors like Roger from Kenda helping me out at the race, and Brendan who sacrificed his whole Sunday to be my mechanic/feed/photographer. I'm so excited to head into the season working with these dedicated people 'behind the scenes' making the real magic happen. Thanks guys! You make the suffering part of bike racing so much easier!