Ok, I know, I'm going kinda overboard on the Bonelli race recaps and stuff. I just want to jot some stuff down about this short track because it was actually kinda interesting and I learned some stuff from it.

I usually don't give short track much thought, it comes the day after we tear each other apart in XC, I never considered it a discipline I was good at, I'm not a sprinter, and I usually just do it for practicing my starts, sprinting and 'pack handling' skills. This attitude means I'm usually more relaxed before short track then XC and I am willing to try stuff I wouldn't try otherwise, like attacking. At this weekend's STXC I did just that, and it resulted in a $50 prime and Brendan said I did a smart thing at the end... so I'm calling it a success! 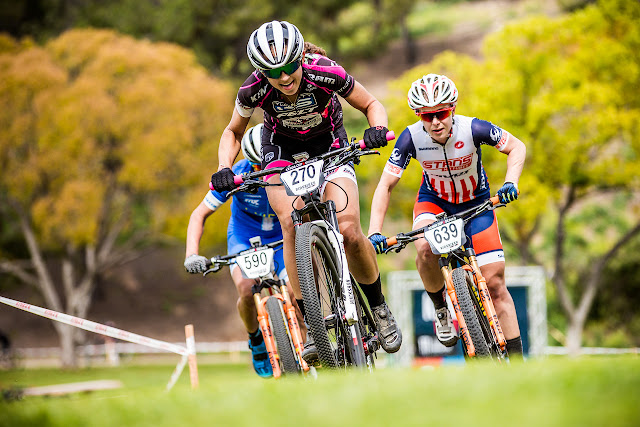 Short track, for those who don't race bikes, is a short race, this time 15 minutes plus 3 laps (each lap was a little over a minute long). Because it's so short, you are going REALLY hard the whole time, and there are typically a few prime laps, where the announcer calls out a cash prize for the first person to cross the line at the end of a particular lap.

As expected our race started out very fast, and the first three/four laps were a blur of fighting for position as we flew down the pavement, up a little dirt hill and then twisted through the turns on the grass to the finish. Around lap 4 I settled into the top 7, and was able to relax enough to make an assessment of who was feeling good/near the front, the usual suspects plus two random girls I've never seen before. Around that time Colt yelled out about the first prime, and the pace quickened with Georgia gapping us all off enough to take the first $50. A few laps later another prime was announced, and as we cruised down the pavement I decided to attack hard, off the front. I was on the front anyway, on accident, and I knew the little hill was a good place for me to get separation. I also figured as long as I was very near the front by the end of the lap, even if I didn't get the prime, it would be more likely that I would be in the break and it was close enough to the end of the race I could land a podium spot. So I dug deep, gave it everything I had, and somehow held onto the lead through the end of the lap, earning the second $50! AND extra bonus, Georgia and I were up the road from everyone else. I dug, Georgia took a turn on the front,  I put in another effort, but the group behind us was close enough the we ended up sitting up and letting them catch us (maybe because Georgia figured it wasn't worth working with me when she knew her team mate Katerina could beat me in a sprint). So we ended up with 6 off the front, meaning I had to beat at least one of the girls in our group to podium.
On the final lap Chloe attacked from the front, when I was in the back of our group, right before the hill, and I couldn't make it around everyone to go after her. She soloed to the win, and I was able to cross the line in 5th (after accidentally coming into the last right hand turn on the wrong side of the girl in front of me and having to waste time repositioning myself to make the turn cleanly, which cost me the sprint).
Anyway, this recap is longer than the race, but I was stoked that my attack from the front was a 'good move' according to Brendan, that hungover I was able to race so well, and that I got the prime! It was pretty fun considering short track is typically the most painful 15-20 minutes of one's week. I have a lot to learn about bike racing still, but the progression from complete newbie, to where I am now is crazy exciting, you know, like those corny sayings, it's the journey, not the destination... or something like that!

Now it's back to the grind of training/core/training/rolling/trying to not eat ALL THE COOKIES... you know the usue :) Can't wait to do it all again this weekend at Keyesville!!!