So this year the first Bonelli Park race was the second round of the Kenda Cup West series and the first PRO XCT of 2016. Despite extreme anxiety over not living up to my expectations of myself, I was pretty calm the morning of, and at the start line for the cross country race on Sat. That doesn't mean I didn't go to extreme measures to make sure everything was the same as last year to try to ensure a similar result (we had the same meal for dinner the night before as last year, I ate the same breakfast in 2 waves, with the same timing...I'm not superstitious... :).

I had a front row call up, a clean start, and was able to settle into a top 10 position on the start loop. After the short start loop, I did a little work to ensure I was close enough to the front to not get held up on the descent and then settled in around who I predicted would be the race leaders, Gould, Nash, Huck, Grant and Woodruff. 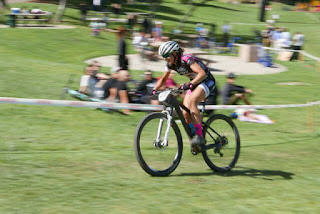 The next two laps were an exercise in both being assertive to hold position and self control to keep calm and not go to the front and destroy myself. We raced 6 full 3-mile laps, and although the pace seemed easy at times in the beginning of the race, I knew the last two laps would not be easy, so saving something was important. I focused on staying glued to the wheel in front of me on the descents (which was AWESOME because I didn't get dropped descending like last year, even when I was on Nash's wheel!!) and on watching the others, trying to figure out their strategies and weaknesses.
As the race progressed our group of 6 got some separation from the rest of the field, and Chloe started attacking at the bottom of the descents as well as on a few climbs. I tried to stay calm, cover attacks, sit third wheel as much as possible. The one time I would go to the front was leading into the final descent, to guarantee I didn't get dropped because there were a few turns I didn't feel super confident about. This resulted in a bit of flack when we passed through the start finish because Brendan and everyone cheering though I was sitting on the front for the whole race... and I probably should have come off the front on the pavement, but feeling comfortable/having the chance to eat and drink without worrying about an attack worked well for me.
Around lap 4 Erin and Chloe's increased pace on the climbs allowed our group to shed the other three, although I could still see Nash pretty close behind us. I was still comfortable though, which meant a fast final lap would probably put the nail in the coffin, and place Chloe, Erin and I on the podium. On the first climb of the last lap a was a little too anxious about not getting dropped by the other two and rubbed Chloe's wheel from behind, hard enough to make me loose my balance and have to throw out a foot. I was able to rejoin Chloe but, mentally settled for third, and just sat on her wheel through the first half the lap. She eventually got a small gap on me on a descent, which I tried really hard to close, but I ended up crossing the finish line 7 seconds behind her for third. 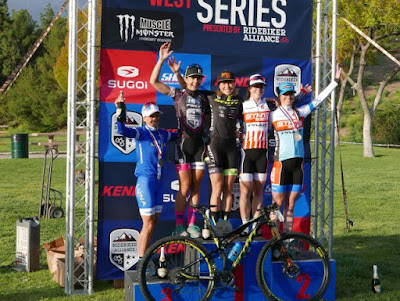 The fascinating thing about this race for me was that I was able to do so much thinking and work on positioning myself rather than just doing everything in my power to keep up like last year. I didn't pull aside to let the others descend in front of me, I noticed who was getting gapped in descents, to know not to be behind them if possible, and I kept my cool/was able to anticipate the outcome of parts of the race based on observation. I was stoked with my fitness (being able to stay in the lead group all the way to the end), and really just had a blast racing my bike even though I had placed so much pressure on myself to do well. Oh, and I ATE DURING A BIKE RACE! 2 gels and 1 whole bottle with of drink mix!

I had some weird thoughts during the race as well, when we hit off camber descents I focused on the fact that my tires were up for the job to keep myself from braking, and instead of thinking 'only 3 more laps to go' I was thinking 'I only get to do this section 3 more times' which was pretty awesome. Every climb and every descent felt way shorter ad less terrible than last year, and the Nine was the perfect bike even in the rough rock garden.

Obviously there are a lot of people responsible for the successes in this race. Brendan stayed up crazy late on Thursday night building my hard tail (Nine FRD) and some of the parts he took off his own personal bike. He gave up his entire weekend to support me in the race, tolerated my spazy stress in the morning wanting to drive out to Bonelli an hour too early just to be safe, and did an excellent job in the feed zone. Kappius Components send me extra wheels in the nick of time so I could pre-ride both the Edict and Nine and make a decision on tire set up and bike choice on Friday, and Crank Brothers also stepped up in an unconventional way when asked for some extra help last month. The whole team Ridebiker crew worked their tails off to make race day as easy as possible for all of us who raced, I am overwhelmed with gratitude for everything they do on a daily basis to make cross country mountain bike racing exciting, and relevant, and accessible to us here in North America.

And I have to mention that after I was done being pee tested (I was randomly selected by USADA, and then it took me 2.5 hours to be able to pee the requisite amount) I may have cried for a few minutes in the RV by myself after reading all the tweets from everyone at home watching the race, excited to see how I was doing and cheering for me. I don't think I will ever get used to the feeling of being so supported by so many friends/fans/family. Racing bikes is fun, but you guys make it something really special, I am really grateful to know all of you and to have your support!

Short short track recap coming when I have pics (I never really think twice about short track, but this one was particularly interesting).