The stoke for this upcoming mtb race season could not be higher right now! Team camp just wrapped up for team Ridebiker here in Orange County and the anticipation of a great season racing with awesome team mates, supported by incredible sponsors is buzzing around us like electricity.
A quick recap of team camp MTB style! 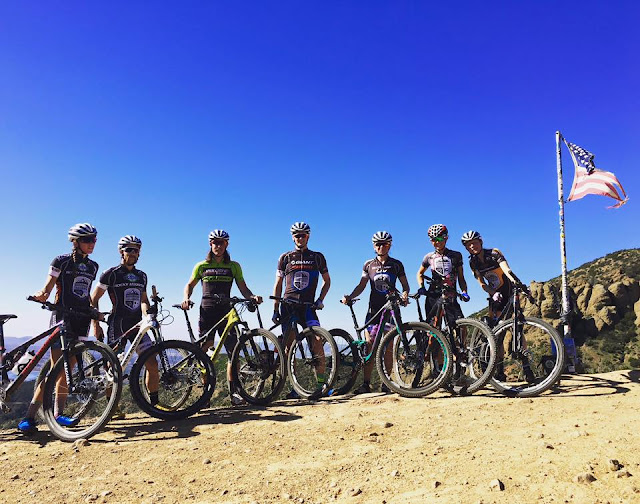 Day 1 started on Thursday for me, leading a little team ride with the Ridebikers who arrived early. We hit Whiting Ranch and the Luge, and then pedaled through the canyons back to their hotel in Orange for some extra credit asphalt time. It was pretty toasty out, but the feeling of dirt under knobby rubber after a week on the road was pretty special. I think the team liked the Luge, and it was funny to hear how many of them didn't realize we had real climbing here in SoCal! Post ride I had to book it to Felt to finish building my 2016 race machine, then to yoga to get some core work in, and finally to dinner with the team and the man with the plan Scott Tedro. In the mix I got to experience SoCal traffic during rush hour for the first time (never needed to get somewhere by a certain time and been screwed by traffic so bad before) so it was a bit stressful, BUT dinner was pretty special. It kinda hit me again how lucky I am to be surrounded by such incredible people who have accomplished some pretty amazing things. I have an inspiring group of mentors/advocates/management and team mates. 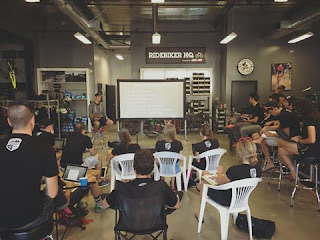 Day 2 started with a ripping shred every trail in Santiago Oaks ride. I had so much fun following some crazy fast dudes around, slaying each downhill and showing off the goods in the Oaks. The ride was followed by some foam rolling/stretching (I'm trying to be a good kid!) and a marathon classroom session of Ridebiker education. Colt, Adam and Rory did a great job explaining to us all the nuts and bolts of the team, the season, and the responsibilities that come with being on the team, which left me a bit overwhelmed (I know it's mostly long term stuff, but I could use a lot of improvement in the 'giving back to sponsors' area, I always feel like I'm not doing enough), but also left us feeling inspired and excited! After that I was lame and went home while everyone else headed to downtown Disney. A bunch of the kids on the team are in their 20's... so I'm using the excuse that us older folks need more downtime/rest :) 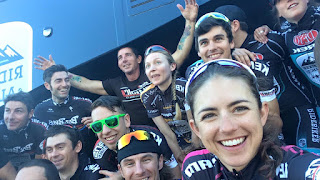 Day 3 was photo day ALL day. We started bright and early with headshots at the hotel, and then moved the crew to the Oaks for riding shots. It was a lot of work, and tons of time in the sun riding back and forth, BUT great team bonding time as well. I got to do some serious wheelie practice with Ellen, had a blast goofing off with all the girls on the team, and snuck in 15 minutes of actually riding my bike. Photos didn't wrap up until about 4pm, and then we had a calm little team dinner/campfire with the world's best s'mores.
And day 4 we hit all my favorites in Laguna for a solid 3.5 hour play day. I was a bit stressed about the amount of fire road we ended up riding, but it was still an awesome ride that concluded with heart shaped pizza, and amazing cookies thanks to Debbie.

I was a boob all weekend and took very few pictures (my dang phone has SO little memory and I am struggling with the process of getting pictures off my phone onto my comp), which I kinda really regret. The grass was fluffy green, the sun low and bright, and the team kits with all their individual colors and sponsors looked so cool winding up the climbs or down the twisty descents we hit. Anyway, it was a great weekend that completely flew by and now it's a race against the clock to get ready for the start of the season. Although the kit is ready, one bike is built and the races are choosen, there is still A LOT to do! But first, some recovery from a packed weekend of work!