Yesterday was the third and final day of the 2016 Chico Stage Race, a double day with both a TT and criterium. With two stages we had an earlier start than normal, and I don't know about everyone else, but I had that dull headache from having already raced two days in a row. The girls on the team are masters of hydration, and I'm learning from them, so there was a lot of water drinking to get rid of the headache. Can you tell we LOVE our Mobots?!

I haven't raced a TT since the UC Davis days, back when Brendan was trying to woo me with home made time trial bikes :) and it's still kinda surreal to hop on a Felt TT bike because HE WORKS THERE NOW!!! Although Brendan doesn't engineer TT bikes... it's still blowing my mind how all these cool things have come together (thanks Nicola!!!!!!)

Anyway, coach gave me a serious warm up (I mean, it prob wasn't THAT hard, but it felt hard after Friday and Saturday's efforts), and I cracked down and got it done, mostly. Racing bikes is pretty much the best, but even better is being supported by such an incredible group of people from our team managment to the incredible mechanics who helped facilitate warming up on my road bike/swapping over to the TT bike... all I had to do was be dressed, fed, hydrated and execute the warm up. It's amazing how much easier it is to focus/suffer with such a great team of people around you.
So the TT was a 10 mile, mostly flat course, with 2 right hand turns. For the first 3 miles I had a really hard time getting comfortable on the bike because I'm SO not used to the TT bike thing, but when Allison Tetrick passed me and gave me a carrot to chase I was able to distract myself from the pain and focus on not letting her ride away from me. Six miles in Allie Dragoo (my amazing team mate) passed me and then it was just a blur of snot, sweat and burning quads to the finish. To be clear, two of the fastest women on TT bikes in the US started 30 second and 60 seconds after me... so getting passed sucked, but at least I knew those two were absolute cannons. I didn't really have ANY idea how I did, but I'm pretty sure I left it all out there on the road. I was in the aero bars for 90% of the race, but HAD to come up for air a few times because the position is so different and I was really struggling to breath. Anyway, I ended up placing 9th, so that isn't too sucky in a field of 50! More importantly though, Allie won and Leah placed 2nd. The girls on this team blow my mind with their strength! 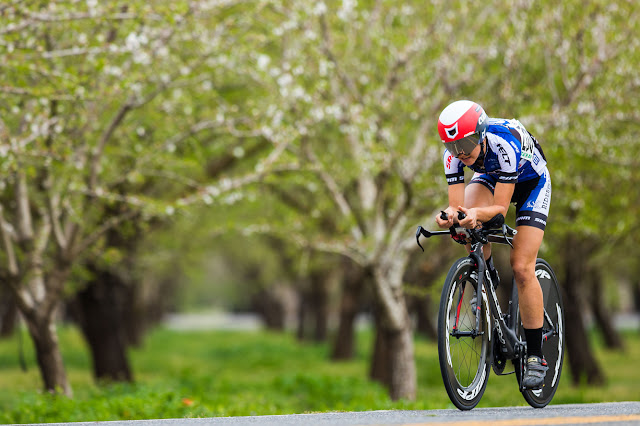 The above picture is what TT position looks like (although in my mind when I was racing I thought I was WAY more hunched down, haha) and why it was so painful :) Being aero man, it hurts!

Lastly we had an L shaped crit in downtown Chico, announced by my all time favorite announcer Dave Towle (the fact that he was there made my day). I also haven't raced a crit since college, and was CRAZY anxious about it, but I followed my team mates lead in being calm and collected going into it. It also helped that I was CRAZY tired from all the racing, too tired to be wound up. The 55 minute drag race started fast, continued to be fast and ended fast in a blur of PEDAL REALLY HARD, CORNER REALLY HARD, PEDAL REALLY HARD on repeat about 400 times. I have absolutely no idea how many laps we did because I was concentrating SOOOOOO hard on following wheels through the 12 thousand corners, and also trying so so hard to move up (but not succeeding most the time). By the end of the race I was crazy more comfortable riding in such a tight group, going so fast and cornering a bunch, so even though I didn't really contribute much to the team's efforts, I got a lot out of the experience, and I didn't get dropped or crash! My team killed it, especially Holly who somehow had the legs to slay and Allie who was off the front... watching them work was such a cool experience!

In the end our team finished with 1st and 2nd in the GC (general classification, which is like overall score) and the team win. I placed 10th in the GC, which doesn't really matter in the grand scheme of things, but is a little cool.

Whew, this is a long recap. I still have A TON more thoughts on the weekend, but have to get some work done, so this wont be the last time you hear about Chico Stage Race :) haha, unless you're sick of it and never read my blog again! It was just such an eventful, amazing experience, filled with a few pretty low points and some cool highs, surrounded by absolutely incredible people... I don't feel like my words have done it justice :)