Today marked my return to road racing in a fun, fast, exciting way: stage 1 of the Chico Stage Race! We raced for about 75 minutes on the Thunderbird raceway race track (for cars) this afternoon and although I was pretty nervous before the start, I had a blast!
The day started off will espresso, lots of espresso since the house we are staying in has an espresso machine! Then a team meeting where I learned a bunch about tactics from the incredibly decorated and crazy smart Mari Holden (It's cool in itself that I am on a team directed by her!). My job was to not get dropped, communicate with my team mates, cover stuff (that means don't let any other teams get their riders up the road away from the main group) if my team mates tell me to and generally just learn a bunch.
We had fun in the team van en-route to the race. These teammates make it super easy to stay calm and collected pre-race! I was pretty nervous, but they are so positive and encouraging and seasoned that by the time we got there my crazy head was pretty calm and it was just down to business.
I got in a decent warm up, and lined up with the team, stoked and still a little anxious about how the race would go down. Once we started though, it was like riding a bike, the racing thing, it kinda came back to me. 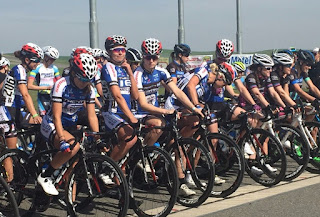 The course was 8 laps of a 3 mile loop with a bunch of smooth turns and 2 small hills, one of which had a pinch point in it. The first lap was fast, but not too fast. I got shuffled to the back pretty quickly, but remembered what Phil Mooney told me, and worked my tail off to move up and be near my team mates. There was a crash at the top of the first little hill on the second lap, and I managed to be right behind it, but was able to move around it. The thing that surprised me the most was how much everyone moved in on the corners, like start wide, crowd the inside and then go wide again. I was a little freaked out by it for the first three laps, but settled into the mindset that everything from my ears back didn't matter, so if I just kept moving forward it would all be good. Every even numbered lap was a sprint points lap, so the first three to cross the line on laps 2, 4, 6, and 8 got points towards the sprinters jersey. On lap 6 I accidently got off the front because I may have attacked the hill a little too hard and the group didn't really chase me down (the other teams prob thought I couldn't manage to stay away in the wind all the way to the finish). I kept looking back to see where the group was and it became apparent at some point that I could stay away through the line. I wasn't really sure if I should be going for the points because we had already decided pre-race which team mate would go for the sprinters jersey and it wasn't me, thus I would essentially be taking points away from that team mate. Anyway, I got the three points, and it turned out ok because the girl we set up to win the sprinters jersey had the points to win it. I was pretty gassed after the attack/solo effort, so I sat in and recovered a bit, then did some stupid moves thinking I was helping when I really was not. In the end my team mate AJ won the final sprint, and Sofia placed second and got the sprinters jersey.


I already learned a ton just from this 75 minute race. I learned that I need to communicate a TON more with my team mates during the race, specifically letting them know when I am near them. I need to work on not being stressed about missing a move and actually draft off people, not sit to the side of them in the wind. I learned that there is useful sitting on the front, and wasteful sitting on the front of the race, but I'm still not sure which is which and how to tell the difference. I was reminded that position is everything in the end of the a race, and that I need to keep my cadence high in general, so those are all the things I will be working on this year. 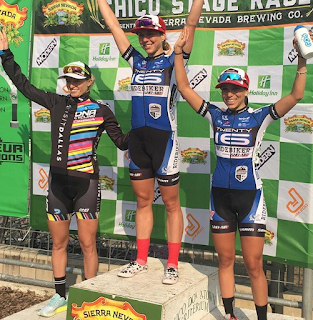 Overall I had a blast racing road bikes. The Felt F1 (my race bike which I rode for the first time today) was CRAZY fast, and the thrill/terrifying feeling of flying around that track with 57 stupid strong women is pretty special. And the best part is I get to do it again with this awesome team tomorrow, and again the next day!