Team Camp is A Wrap 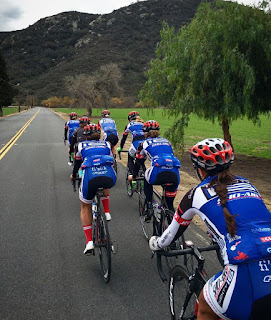 BUT I'm not going to sugar coat it, this week was tough. The physical part wasn't too bad, in part because I got a psuedo day off on Sat helping out with a clinic while the team was suffering it out on the Swami's group ride. The hard part was the mental/emotional aspect of throwing myself into something new and I'll be honest, a bit over my head.       Racing road bikes on a pro team used to be my end all be all of cycling dreams. In college I would have given my left leg for this opportunity. But after we moved south and I started racing mountain bikes, that dream faded quite a bit. I had pretty much resigned myself to not ever racing on the road again when this opportunity arose, and I jumped at it because that old flame was fanned a bit. I think I underestimated how much work it would be to get back into the road racing swing of things though, and this week was an eye opener as to how much work I need to do.
All that being said, and despite feeling a bit overwhelmed at times, and worrying that I wasn't good enough to race with these super fast, super professional ladies, I am more motivated than ever coming out of this week to learn as much as I can and to be as much of an asset to the team as possible. I want to embrace this opportunity to grow as a cyclist, and to try to tackle something new and hard. I keep thinking about what my sister told me last year, if it's scary, it's probably worth it :) So, in the words of Taylor Swift 'So it's going to be forever, or it's gonna go down in flames, you can tell me when it's over, if the high was worth the pain' haha

Tomorrow I'll post a recap of the rides from Friday and Sunday at camp, but now it's time to go put some rubber on dirt for the first time in a week... I'm dying with excitement! NOBEL CANYON HERE I COME!