One of the most exciting things about this year (besides the final season of Downton Abby) is that I get to race on the most incredible machines made by the most passionate people based right here in Orange County!

That's right, I get to race for Felt Bicycles.

Even cooler, I get to race Felt bikes on both the road and the mountain, so I'm 100% part of the Felt family!
This past Monday my road teamie Alison and I got to tour Felt HQ, ask lots of questions and stick our heads in guillotines (for testing forks of course). We learned a ton about the carbon used on the bikes we will race this year, about the struggle between making things light but also stiff, how Felt achieves both better than any other bike company, AND we got to meet some of the office dogs! There is some pretty rad stuff coming from Felt in the near future, in terms of high end frames, as well as the mid range stuff. Felt is one of the only bicycle designers to put an emphasis on making their mid price range bikes super light, sometimes lighter than the high end bikes from the competitors. 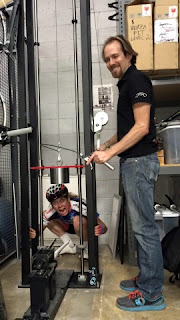 It's always fun listening to the enginerds talk about the process of designing the fastest bikes in the world, how they obsess over the most minute details and how the company has a huge emphasis on innovation, which has resulted in many Ironman World championship winning time trials bikes. I know from personal experience, being married to a Felt engineer, that they work tirelessly to produce the best frames imaginable, which often means Brendan doesn't come home till late at night because he gets super wrapped up in projects and doesn't want to stop working. Sometimes I get upset because I want to hang out with him, but how can you be mad at a boy who loves engineering bikes so much?!

So the bikes I'll be racing include the Nine 29er hardtail, and Edict for mountain, and the F1 for road. All three bikes have the same super sweet Textreme finish, that super chunky checkerboard carbon weave that makes the frames stiff but light. The Nine is probably the lightest mass production 29er hardtail on the market, and the Edict uses the same FAST suspension system as the Decree I've been raving about and is tuned to be super efficient when pedaling.
Hopefully I'll be building up the Edict and Nine this weekend, so look for LOTS of sweet pictures of sick Felt mountain bikes coming soon!

Thanks Felt for providing the best possible equipment for me to shred this year. Training like a banshee is one thing, but knowing you're on the best machine as well... that's golden :)


Oh, also HUGE thanks to Nicola Cranmer for basically doing ALL the heavy lifting to make this happen. Nicola and RideBiker continue to make my dreams come true, from racing for Felt, to having the opportunity to race on an incredible road team, I am surrounded by an awesome group of people whose passion for the sport of cycling and creating a sustainable support network for athletes of all levels is unparalleled.